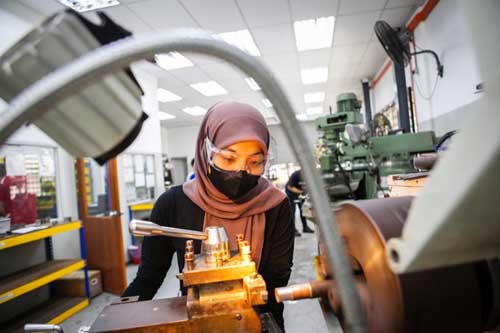 Over the last few decades, the TVET system has shifted notably towards efforts to collaborate with industry players. The Ministries of Education, Higher Education and Human Resources have been the more recognised public faces in matters of TVET.

Up to 10 other ministries (Youth and Sports, Women, Family and Community Development, Agriculture and Food industries, Defence, Works, and Rural and Regional Development, among others) and as many as 20 government bodies have had their own TVET programmes operating independently and with different standards (for capacity planning, recruitment and training and curriculum development).

There are also sub-ministry bodies, such as the Rubber Industry Smallholders Development Authority (RISDA) and MARA. Hundreds of private TVET providers with little-known operations, performance and standards exist.

Although the National Occupational Skills Standard (NOSS) serves as the national curriculum for the recruitment and training of TVET instructors and trainees, some ministries operate independently and keep to their own standards. Some bodies operate in silos, while others compete with each other.

Here, we see the entanglement of parallel, overlapping or even competing jurisdictions and standards, and the lack of one lead agency to champion and coordinate the national TVET agenda.

This results in a duplication of offerings, especially apparent in situations where public and private TVET institutes in close geographical proximity to each other compete for students.

In one particular district in northern Malaysia that we visited, for example, one local TVET institution providing automotive courses complained of having to compete fiercely with several other local TVET training providers in close proximity to one another for students interested in acquiring the same skills certification.

The divergence caused by the multiplicity of stakeholders has led to differing preferences in employers. Some employers will hire based on the reputation of the TVET training provider (such as the Penang Skills Development Corporation, PSDC), while others prefer to hire skilled workers based on the accrediting body of the certification.

Other employers prefer TVET graduates with certificates accredited by the Malaysian Qualifications Agency (MQA), which is under the Ministry of Higher Education, over those accredited by the Human Resources Ministry’s DSD. An institute chairman reported to us that his institute saw a decrease in applicants after the Department of Public Services in charge of civil service employment withdrew recognition of a particular DSD certification.

Currently, important political actors – state governments, district and municipal/town councils and economic programmes such as the five Regional Economic Corridors, have yet to clearly and systematically integrate and engage in projects to develop national TVET.

Clearly, too many organisations involved in the management of TVET have led to confusion, lack of clarity, weak enforcement and needless duplications, thereby exacerbating the already poor image of TVET among the key stakeholders (namely, industry, parents, students and the community at large).

Large-scale collaborations with industry have shown some success; the Malaysian Plastics Manufacturers Association (MPMA) collaborated with the Economic Planning Unit (EPU) in 2012 and 2017 for talent development in the plastics industry, using both local and international expertise. Based on a recent Auditor General’s Report, current employer satisfaction with TVET graduates’ outcomes is at 88.5%.

However, a common point raised by our interlocutors is that industry players are seldom, inadequately and unsystematically engaged in the development of TVET programmes. Industry players, on the other hand, say they do not see clear returns on their investment when they collaborate with ministries and other stakeholders on TVET. They are especially wary about the complicated bureaucracy involved.

A survey found that more than one-fifth of 507 locally based companies said they either would not allow trainees from the SLDN programme to perform on-site operations side-by-side with their employees (17.8%) or were not sure if they would allow the trainees to do so (10.2%).

The lack of adequate collaboration has led to a mismatch of skills for the needs of the industry. Now, employers have to spend time and resources retraining their fresh hires, leading to their unwillingness to offer high salaries to fresh TVET graduates. It frustrates existing trainees and deters many others from joining TVET programmes because, at the end of the day, they might not even be hired.

Despite the positive commitment and various initiatives and developments, TVET in Malaysia is still plagued by the lack of synergies, efficiencies and shared aspirations among its key players and stakeholders. However, we believe there is a way out of the woods.

Most generally, an overall improved audit of the TVET system, covering all ministries and the governance system, needs to be done. The institutional framework should then be rationalised to focus on skills development efforts that align with national socio-economic priorities. That said, strategic collaboration across ministries and industry support must be improved.

There is also a need for shared responsibility and more autonomy among states and district and local authorities, as well as for greater engagement with the regional economic corridors. A whole-of-government as well as a whole-of-society approach should be adopted for forging partnerships and strengthening the TVET system. To this end, increased inter-ministry data sharing would be important to support effective decision-making.

As for the role of industry in TVET, it is a consensus among many observers and stakeholders that TVET needs to become industry-driven. The industry should be accorded a prominent role in steering the national TVET agenda, instead of merely being invited to collaborate.

TVET institutions, meanwhile, should be empowered and incentivised to engage with their stakeholders, especially industry partners, expand partnerships with the industry beyond student internships and curriculum development, and inculcate innovative learning through student mentorship, project-based learning and guest lectures.

A rating exercise, however, should also be undertaken on all TVET providers to enhance the overall management of TVET and to publicly ascertain the quality of these providers. A review of all approved TVET courses based on established protocols and end-user (industry) participation is planned, although the question of how this review would be carried out (e.g. balanced scorecard) has not yet been answered.

Audit reviews at the appropriate frequency should be carried out on selected TVET providers in order to assess, for example, course alignment with industry requirements.

All efforts to revamp the TVET system as the preferred education pathway will have to be accompanied by focused, coherent, national-level, branding initiatives targeted at specific groups; from students and parents to the community and industry. TVET should be highlighted as a potential incubator for entrepreneurs in order to attract more high-quality students.

Finally, the marketing of TVET through new and traditional media is crucial. The public image of TVET needs to be raised to motivate the next generation.

Nadya Subramaniam is a Program Manager at The Asia Foundation, leading the initiative to support the growth and development of Malaysia’s TVET Ecosystem. She is also involved in digital upskilling efforts aimed at women microentrepreneurs and youth living below the poverty line.

Fauwaz Abdul Aziz is a Projects Researcher at Penang Institute, and is currently completing his PhD dissertation in anthropology at the Friedrich-Alexander University (FAU) Erlangen–Nürnberg in Bayern, Germany.

Note: The authors have been involved in a research partnership formed in early 2021 between The Asia Foundation (TAF) and the International Institute of Public Policy and Management (INPUMA), University of Malaya, to understand the critical constraints and challenges facing TVET in Malaysia, in order to support the growth and improvement of the system. Funded by the Australian Department of Foreign Affairs and Trade, the research involved engaging with diverse stakeholders in the national TVET system in interviews, focus group discussions, a policy lab, and site visits.

The stakeholders ranged from TVET students, instructors and administrators to government officials, institutional representatives and industry players. The outcome was the publication, in January 2022, of Recommendations Towards Improving Technical and Vocational Education and Training in Malaysia, which assessed the national TVET ecosystem and proposed ways to improve that system. The complete report can be downloaded here.

This article was first published by Penang Institute on 6th January 2023 and is republished with permission.