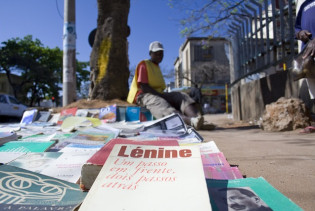 By Thembi Mutch
In downtown Maputo, the walls are covered with the local newspaper, Verdade, and a range of people, young and old, male and female, are reading it. Verdade, which means Truth in Portuguese, is a free weekly newspaper that is pasted on the walls of buildings in Mozambique’s capital.

By Thembi Mutch
In Kilwa District in southern Tanzania local community leader and fisherman Salim Riziki stands next to a set of turbines, newly imported from Dubai, talking about the gas finds on Songo Songo, an island 15 km off the mainland.

By Thembi Mutch
Lined up along the streets of central Maputo, Mozambique’s capital city, are expensive, European-style bars and restaurants with sophisticated names like Café Continental, Nautilus, 1908 and Mundos.

By Thembi Mutch
The local Tanzanian community bordering Lake Nyasa is no nearer to understanding what the conflict between their country and Malawi is about, nor why so much is at stake, as mediation efforts between Malawi and Tanzania are expected to begin soon.
ADVERTISEMENT ADVERTISEMENT