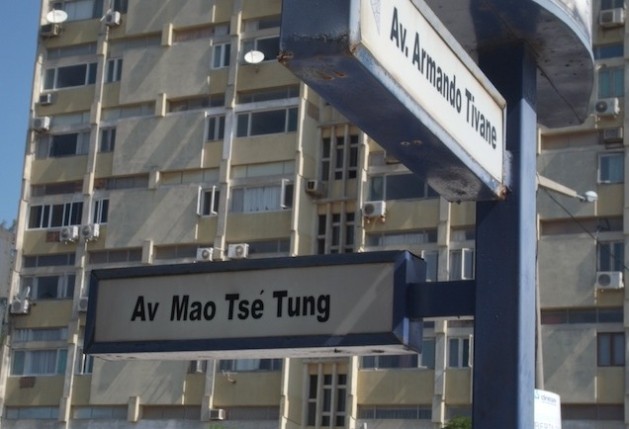 Mozambique’s capital city Maputo has street names after socialist and communist leaders, however, the country has a huge wealth disparity. Credit: Thembi Mutch/IPS

MAPUTO, Jun 5 2013 (IPS) - Lined up along the streets of central Maputo, Mozambique’s capital city, are expensive, European-style bars and restaurants with sophisticated names like Café Continental, Nautilus, 1908 and Mundos.

And the residential houses and flats in the capital of this southern African nation are a flabbergasting and bewildering array of 1960s modernist and Art Deco icons, mixed with new-money skyscrapers.

Further away in the new, Chinese-built airport in Maputo, which was completed in February 2013, aftershaves sell for 230 dollars, and bottles of Dom Pérignon, a vintage champagne, cost 320 dollars.

That is literally three months’ salary for the average worker, who lives on 3,000 metacals (100 dollars) a month.

Faustus Cavelelo is a tuk tuk driver who has worked as a private bodyguard for international investors and as a bouncer. He is now saving to support his young family.

“The big investors need bodyguards because yes, they are so rich and they will get robbed. But for the rest of us, it’s completely safe. For myself it’s hard to make money – people are jealous, and selfish, and don’t help each other. I am determined to improve myself. I work 10-hour days, every day, and work out twice a day, just to deal with the stress, the uncertainty.”

No figures exist on the wealth disparity here. Mozambique is a jumble of statistical contradictions. It has one of the highest real GDP growth rates in the world, at 7.5 percent. Yet it ranks 185th out of 187 countries on the 2013 United Nations Human Development Index by the U.N. Development Programme. It is one of the poorest countries in the world, with over 55 percent of its 23.9 million people officially living below the poverty line.

In central Maputo the latest Toyota Pradas, Hiluxs and Land Rovers drive down Avenidas Julius Nyerere, Ho Chi Minh and Kim Il Sung. These former socialist leaders might be turning in their graves at the wealth disparities to be found here.

But who are these new super-rich?

A variety of answers emerge: They are government ministers; they are friends and relatives of the Front for the Liberation of Mozambique (Frelimo), the ruling party; they are people working with and for the U.N.; and a small handful are oil and gas investors and associated traders.

The international hotels in Maputo are booked to 95 percent capacity in the week with businesspeople converging here from across the globe: Australia, United States, United Arab Emirates, Norway, Brazil and China. The majority are here for the country’s oil and natural gas – in 2011 Mozambique discovered offshore gas fields.

“It certainly is boom time for the Mozambican economy,” Markus Weimer, a senior analyst at Control Risks, an independent global risk consultancy based in London and Maputo, tells IPS.

“The country is performing strongly in a gloomy global context, and GDP growth rates are predicted to be high (above seven percent) for the coming years. The question is whether strong GDP growth can satisfy the raised expectations of a large part of Mozambique’s young and growing population.”

Feling Capella, a journalist and poet, echoes these sentiments.

“There is a growing divide here: between old and young, between rich and poor. We are the new generation, born in the war. We are educated, we want jobs, but we can’t get them. We live in areas where the roads are awful and there is no public lighting, no sewage system,” he tells IPS.

The Mozambican civil war began in 1977 and ended 15 years later in 1992. But corruption has become a major issue in the country.

Sebastien Marlier, an analyst at the Economist Intelligence Unit who tracks developments in Mozambique, was quoted in the Economist as saying: “Corruption has become a major concern in Mozambique. A small elite associated with the ruling party and with strong business interests dominates the economy.”

The director of Mozambique Human Rights League and Mozambique’s national winner of the Secretary’s International Women of Courage Award for 2010, Dr. Alice Mabota, is candid about corruption.

“People are very angry about corruption. They want the right decisions taken by the right people. Frelimo knows they have a problem. I hope the next generation is able to address these problems. Please, I implore our citizens, go ahead, don’t wait for another person to make change, be that person yourself,” she tells IPS.

But something else that is so obviously missing in Maputo are the middle classes. Dentists and doctors here do not own the newest cars and their sunglasses are not international brands such as Gucci or Prada. Analysts say Mozambique is a glaring illustration that the “trickle down” effect of development capitalism does not work.

Natalie Tenzer Silva runs Dana Tours, the biggest tour company in Mozambique. She thinks the big divide between the country’s rich and poor is “unhealthy”.

“We need to cater for the middle market, for mid-range tourists, and we do this by investing in hotels, airports and cheaper travel. At the moment the big hurdle is the cost of travelling inside Mozambique, it’s so huge, but there’s so much here. Extraordinary beaches, countryside, game parks and a thriving cultural scene.

“We can cater for the existing South and East African market that want to travel here, and stimulate growth in country, and create a new, mobile, middle class,” she tells IPS.

“One factor for the large wealth divide is the high level of poverty on the one hand as well as a rapidly emerging business class on the other. The speed of developments is important as it means that many opportunities bypass ‘normal’ citizens. Another factor is that the business environment is particularly difficult for entrepreneurs and SMEs (small and medium enterprises),” he says.