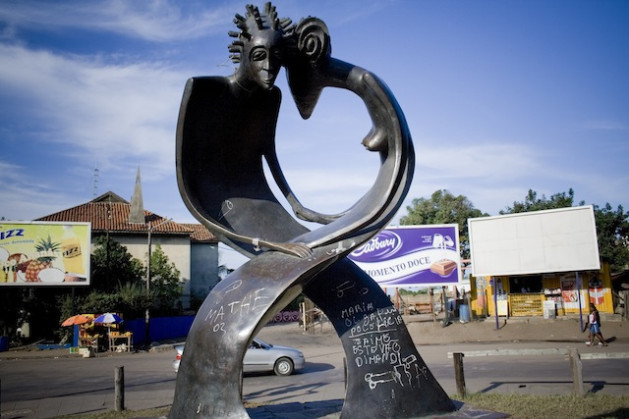 But for democracy like Mozambique’s to be robust, it needs artists and critics. Credit: Thembi Mutch/IPS

MAPUTO, May 27 2013 (IPS) - Mozambique is proud home to not one, but two female rappers who are both qualified lawyers. Yveth “Vauvita” Matunza is striking. She is tall, wearing shoes with enormous stilettos. She has on full make up and a smart, tailored dress suit. She is doing her masters part time while working full time at the Mozambican Human Rights League offices – and rapping on her off time.

There is no contradiction in this for her. And she is keen to move away from the heterogeneous “plastic” sound of American hip hop and rap, and create a sound that is distinctly Mozambican.

The other of Mozambique’s female rappers is Dama Do Bling “Lady of Bling”, who recently appeared on a glossy magazine cover, holding her baby daughter.

Mozambique’s constitution, which is in the process of being revised, is exemplary in many things. It recognises that all citizens have the right to an education, that men and women are equal in all spheres of life, and that all people have the right to freedom of expression and of the press.

But for democracy to be robust, it needs artists and critics, as the late, prominent female musician Lidia Sthembile Udenga Mate, from the all-female band Likute, told IPS in an interview in March, just before her death.

“The artists, the musicians are the most important voices in society. We mock, we hold a mirror, we criticise, we are honest, we celebrate… our role is vital,” she had said.

In 2010 the vibrant Mozambican rapper Azagaia directly named corrupt politicians during the bread riots that shook the country after prices of bread soared. He was harassed and arrested for one night before being released. But his case did not go unnoticed by the international media.

There are others, for example, who in their music also name the people involved in corrupt land deals. Like Matunza, it seems they are part of a new breed of savvy young Mozambicans who are openly “globalised”, who are not afraid, and who use social media and publicity, negative or not, to get people to pay attention to the issues galvanising this southern African country.

Matunza says she was obsessed with music as a kid.

“Here there’s so much opportunity to play all kinds of music, a vortex that has opened up… Creatively, anything is possible.” -- Chude Mondlane

“And later issues of justice dominated. I was never even aware that there was a conflict between working as a lawyer in the day, and an MC and rapper at weekends. I am 100 percent Mozambican and proud – critical of our failures, proud of our successes, and I know I can reach the public.

“I rap about things that affect us, men who don’t stick around to look after their kids, human rights abuses and our leaders… I am indirect, I talk in riddles, my concerts are a complete sell out, and, yes, I am famous.”

At only 28 she is focused and sure. Her father, who was a miner in South Africa, brought home the music of Madonna and South African female singers Brenda Fassie and Yvonne Chaka Chaka, which influenced her.

“There’s huge domestic violence here – our culture is one of submission for women. I speak from personal experience. I come from a violent family, a violent community. “What people do and teach and show, is that women must obey their husbands … the number of domestic abuse cases are increasing since September 2009, despite a new act (being passed in) parliament,” she says. In 2009 parliament passed the act on domestic violence, which became operational in March 2010.

She says rap is important to changing attitudes and bringing understanding to the issue.

The enthusiasm in Maputo is palpable. Paulo Chibanga, a music producer and musician who performed in bands, including the South African 340 mill, and Tumi and the Volume, has returned to Mozambique after 15 years in South Africa.

He is working with the Ministry of Women’s Affairs and Social Welfare to raise money, through music performances, for nursery schools in the Mozambican province of Gaza. A war baby, born in 1979 – the country’s civil war began in 1977 and ended in 1992 – Chibanga feels his generation is relatively un-encumbered.

“We are connected to our pasts without being dragged back … we have no resentments, we know our heroes, our culture. We are free, we are positive,” he tells IPS.

But, like Matunza and Mate, Chibanga is politicised, clear and determined to work to an African agenda.

“I think the Western world affects Africa drastically, we are forced to listened to Western music. In Mozambique we don’t have our own record labels, or the option to record. I am more interested in exporting Mozambican culture and musicians, through Bushfire (Swaziland’s pan-African and international music festival) and the AZGO music festival here in Mozambique,” Chibanga says.

Chude Mondlane is the daughter of the revolutionary president of the Front for Liberation of Mozambique or FRELIMO, Eduardo Mondlane. She is a musician, a performer and a big personality. Visibly radiant, she laughs and plays her music on a laptop in the five-star Polana hotel, oblivious to the turned heads.

She has also returned to Mozambique after years of international travel and playing with music greats such as Marcus Miller, Roberta Flack and South African pianist and composer, Abdullah Ibrahim.

“Here there’s so much opportunity to play all kinds of music, a vortex that has opened up…it’s all happening – the worst of the worst, the best of the best. It’s all mixed up. Creatively, anything is possible.”

She is, however, critical of the lack of funding for arts and culture, and the growing dependency on donors and foreign aid.

“We present this face to the donors … We need to be clear about which bits of tradition we want to keep, and which to jettison. Some of our traditions, like female submission, or women being second-class, are actually awful and we need to say this. We can’t only say what donors want.”

Solange Dos Santos is a dynamic female photographer with a degree from the New York Institute of Photography who has just opened up the first photography studio space in Maputo. Dos Santos, like many Mozambicans returning from years abroad, is excited about the future.

“I left in 1996, so coming back now is amazing. So much has changed. It’s buzzing, alive, more liberal, accepting. I love this about Mozambique. It’s very tolerant, very forward looking.

“The infrastructure is way more developed, the nightlife is buzzing, there are films, art (exhibitions), concerts in the park, dancing, theatre, live music every night – it’s so friendly!  There’s something in the air that makes you want to experiment, give it your best. Here you’re allowed to – completely.”

“I want people to see the humanity and beauty in each other … We’re so globalised. I can wear a capulana (a traditional wrap), or high heels and still be a feminist.”