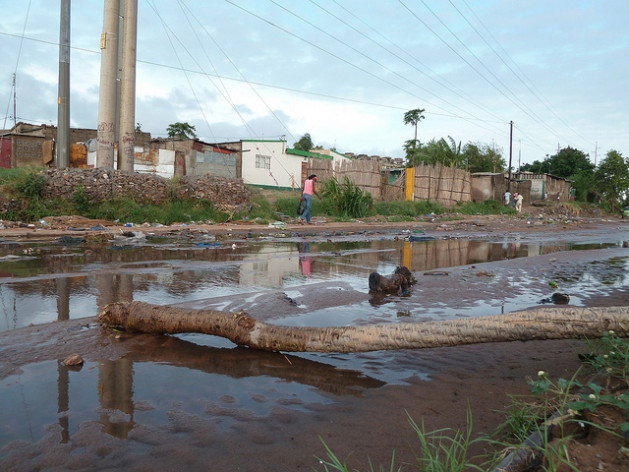 MAPUTO, Mar 1 2013 (IPS) - As Mozambique tries to recover from the worst flooding here since 2000, experts have called for a national discussion on water management and how to maximise its usage in favour of long-term sustainable development.

“Mozambique is a downstream destination for regional rivers, but it still has much to do to maximise those potentials into national development, ” Patrício José, a member of Southern African Development Community’s water division, told IPS.

Some 54 percent of Mozambique’s annual surface flow comes from outside the country and because of its geographical location it has always been vulnerable to natural disaster, particularly flooding, according to the Global Water Partnership Africa.

“In recent years we have seen more of the destruction that water can cause than the benefits it brings. And the country has a challenge to do more to better address the water issue and water-related development,” José said.

Here, in Mozambique, water has been both a blessing and a curse.

In 2000, floods affected 2.5 million people. Over the last few months the Limpopo, Save and Inkomati Rivers flooded, their water levels boosted by the rainfall in neighbouring countries like South Africa and Zimbabwe. With the heavy rains came destruction and since October 2012, about 113 people have been killed and 250,000 affected.

Maria Filda is one of those affected. As the 17-year-old looks down at her newborn baby, she is just glad to be alive. On the day after her baby’s Jan. 13 birth, Filda watched as floods destroyed her house.

“The sound of the rain beating our metal zinc roof was so strong. Suddenly, I saw part of the wall of our house collapsing. I panicked. I carried my daughter in my arms and ran into the sitting room. Before long, my bedroom wall also collapsed,” she told IPS.

Everything she owned, including her baby’s new clothes, was washed away. She now lives in the Força do Povo community school in Hulene suburb, just five kilometers from Mozambique’s capital, Maputo.

Like the rest of the country, Filda is trying to rebuild her life.

The National Institute for Disaster Management evacuated thousands of people from the most-affected provinces of Maputo and Gaza, setting up 16 shelters and providing local communities with food, blankets, water and medicine.

The largest number of people affected by the floods is from Chihaquelane, in Gaza Province. Shelters there are crowded with almost 100,000 people, as authorities struggle to cope with the large numbers.

The destruction wrought by the floods is stark proof of the country’s failing infrastructure and neglected dams, according to José.

“The country has a few dams, but most them are inoperative or work poorly,” José said. “This is one of the problems … because the infrastructure does not work properly to divert the water and manage the overflow from the rivers. We need to improve their functioning and management,” he explained.

The flooding, however, creates a deceptive impression of Mozambique’s water availability. According to the United Nations Environmental Programme, the availability of freshwater in Mozambique is expected to decrease by over half by 2025.

As water stress is expected to become an increasing problem, it has made experts question the feasibility of forestry projects that could affect the country’s water balance.

The government has granted concessions to foreign investors on 250,000 hectares of land in Niassa Province in northern Mozambique, with the intention of developing the country into one of Africa’s biggest suppliers of pine and eucalyptus trees for commercial purposes.

While the land allocation has given rise to allegations of landgrabs and the displacement of local communities, water experts are also concerned that the forestry projects could use up a significant portion of the country’s water supply.

This is because eucalyptus trees, for example, need between 800 and 1,200 millimetres (mm) of water per year to grow.

While there is considerable variation in rainfall across different regions in the country, the Food and Agricultural Organization of the U.N. says that the mean annual rainfall ranges from 800 mm to 1,000 mm along the coast and between 1,000 mm and 2,000 mm in the northern region.

Professor Álvaro Carmo Vaz, a Mozambican water specialist, has no doubt that the water balance in Niassa Province will change as a result.

“If you put that kind of fast-growing species like pine and eucalyptus there, which have a much stronger capacity of absorbing water, it means there will be less water flowing into the river. Because what really happens is that you are using the water before it goes into the river,” he told IPS. He said that the effects of the forestry plantations would have on water supply needed to be carefully analysed in order to find ways to deal with the possible reduced availability.

“Water should be a key issue in the future,” Assistant Professor for Irrigation and Drainage at Eduardo Mondlane University in Maputo, Rui Miguel Ribeiro, told IPS. “Looking at the specific case of Niassa Province, obviously it will change the water balance,” he said, adding that assessments needed to be done to confirm this.

Charles Mchomboh, the project manager at Chikweti Forests, a company the government leased 100,000 hectares of land to in Niassa Province, however, told IPS that there was nothing to be concerned about.

With its plans to grow seven million trees per year, Chikweti Forests currently is one of a total of six forestry companies active in Niassa Province.