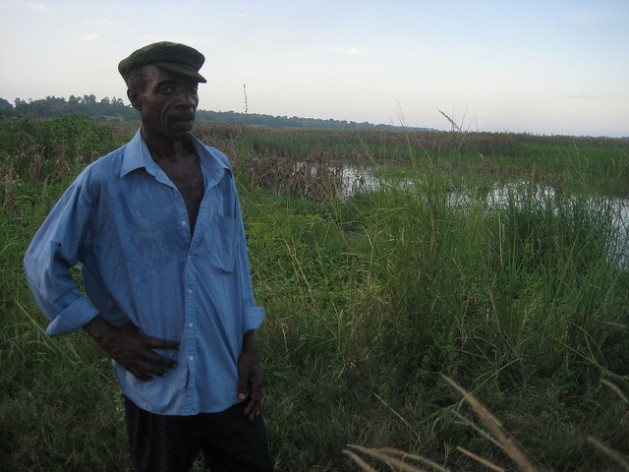 MAPUTO, Feb 22 2013 (IPS) - Mozambican farmers’ unions believe that soon land will become very scarce for locals as the government leases more and more of it to foreign agribusinesses – thus displacing thousands of rural communities and smallholder farmers with no official title deeds to their land.

“As the UNAC (Mozambique’s National Peasants Union) we think that in the very short term land will become scarcest for Mozambicans because the government is attracting foreign investors, arguing that we have huge unused land, João Palate, a spokesperson for UNAC, told IPS.

Official figures from the Investment Promotion Centre estimate that Mozambique has around 19 million hectares (ha) of land with a potential for agriculture, forestry and cattle – though only 5.6 million ha are being utilised.

“But what happens, in fact,” Palate explained, “when investors come their appetite is centered on land already being used by locals.”

Some 64 percent of Mozambicans currently live in rural areas where agriculture is the main form of income and 45 percent live on less than a dollar a day, according to human rights organisation FIAN International.

Over the last two years, the Mozambican government approved more than 10 new foreign agribusiness development projects. The biggest is ProSavana, where more than 10 million ha was awarded to Brazilian and Japanese investors.

“We have cases like the one in Niassa Province, where around four entire districts were leased to Chikweti Forests, expelling thousand of smallholders who had been there for many generations,” Palate said.

According to the country’s constitution, the land is owned by the state and cannot be sold but, “the right of use and profit from the land is conferred on individuals or groups…”

According the Mozambique’s land laws, people can apply for the right of use and to profit from land with the provincial government, if it is less than 1,000 ha. For land larger than 10,000 ha, applications are required to be submitted to the Ministry of Agriculture and Fisheries. According to the law, land can also be allocated to local communities who have occupied it for more than five years.

Palate underlined that land is a sovereignty issue and food production ought to be dominated by locals empowered with knowledge of better farming practices.

ProSavana, for example, are going to grow soybeans, he said. “Which means their business is focused on export — if so, they are not going to resolve our (food security) problems.”

The ProSavana project will be implemented in the Nacala Development Corridor, an area between Nampula, Zambézia and Niassa Provinces in northern Mozambique. Land marked out for the project is currently occupied by thousand of smallholder farmers.

The government, meanwhile, has repeatedly denied claims that smallholder farmers would lose their land in the deal.

Mother of three, Delfina Sidónio, has lost count of the number of times she was promised compensation for the loss of her traditional land, she told IPS.

She lost her five-hectare farm in Ruace community in Zambézia Province to Portuguese agribusinesses Quifel when the company was awarded 10,000 ha of land there by the government. Operating under the project name Hoyo-Hoyo the company plans to grow soy and sunflowers for biofuel production.

Sidónio is one of more than 200 smallholders who lost their land in the deal.

“Our life was all in that land. That land gave us food and supplies – our life style,” Ernesto Elias, head of the smallholders’ association forum in Ruace, told IPS.

“At the beginning, the company promised to give us new farming land to build infrastructure, to supply water and to pay compensation according to what we had on the farm,” he recalled, “but after a few months all the promises became lies.”

Fatima José, another smallholder farmer from the area, said she is worried about her immediate future. “The last harvest crops are now finishing in our storehouses and from the next two months we don’t know how we will survive,” she told IPS.

Contacted by IPS, the Quiefel office in Gurue, Zambézia Province, denied the allegations. “We are preparing ourselves to fulfill the remaining promises done during negotiations with the communities until next June,” a company official said. “And from then on, nobody will talk about land grabbing in Ruace, but will talk about sustainable cooperation between community and investors to develop agribusiness.”

Mahomed Valá, the national director of Agrarian Services in the Ministry of Agriculture, told IPS that the government is aware of the Ruace community complaint. But all the government could do at this stage is to call for dialogue between the contenders, he said.

“Basically the conflict is concerning unfulfilled promises. The company promised land for resettlement, seed and inoculation to support the smallholders, some infrastructures, among other facilities, but they did not fulfil all the promises. I met the company and advised them to strengthen their dialogue with the community and fulfill their promises,” Valá said.

“The important thing to be done to avoid land conflicts is to adopt win-win solutions,” Rafael Uaiene, Assistant Professor in International Development at the Department of Agricultural, Food, and Resource Economics at Michigan State University told IPS.

Mozambique is still a poor country and needs investment to explore its potential, according to Uaiene. “But the country has to protect the land rights of communities and to promote investment in agriculture, as well.”

Win-win means leasing the land to maximise its use, according to the scholar, “And in the case of land that was being used by local communities, they have to be given compensation as the law defines and be integrated into the cycle of the investments,” Uaiene said.