MAPUTO, Aug 17 2011 (IPS) - Long after the wintry sun set over her patch of crops outside the Mozambican capital Angelina Jossefa keeps pulling out weeds. Much of her lettuce, carrots and beetroot died during a cruel winter, which means she has to work harder to feed her three children. 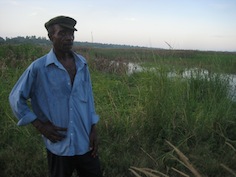 Ambrosio Manjate, 55, a smallholder farmer from Palmeira in Southern Mozambique, is one of the many affected by climate change. Credit: Johannes Myburgh/IPS

“This year things were hard because of the cold. It was very cold,” explains the single mother as she pulls out a few heads of lettuce.

Though Mozambique is usually known for its heat and floods, a comparative lack of rain this year coupled with a severe winter has put even more pressure on struggling subsistence farmers like Jossefa who make up 80 percent of the population.

“Though there weren’t more cold days, the minimum temperatures were very low, the lowest in 50 years,” says Sergio Buque, a climatologist at the southern African country’s National Meteorological Institute.

Previously the lowest recorded minimum temperature was 7.4 degrees Celsius in 1958. This year in June the thermometer registered 5.1 degrees Celsius.

“This was a new record,” continues Buque. Moreover, rainfall during this year’s wet season was extremely poor despite predictions of above- average rains.

“Already the rainy season is not normal anymore,” says Dulce Chilundo, head of Mozambique’s respected National Emergency Operative Centre. “It is global warming, it is changing. I don’t know.”

Despite the usual trend of rain from October through February, the country known for devastating floods in 2000 registered very little rains this year.

“It didn’t happen in October. Then in November it rained much at the same time. Then after that nothing,” Chilundo tells IPS.

“Years ago it used to rain two, three times a month. Now four, five months pass without rain,” Jossefa explains the change in weather patterns on the three acres she has been tilling over the past 29 years with her mother, aunt and sister-in-law. All are single mothers.

And the 41-year-old is worried about what will become of her brood when the money dries up. “It isn’t enough, because two are studying. I manage at least for the transport and house expenses, but it is little,” she laments.

The increasing number of poor people in Mozambique’s cities took to the streets in September 2010 to protest high food prices. But the millions of small farmers spread across the vast country have no voice to raise while factors beyond their control jeopardise their food production.

Over eight million of the country’s people are malnourished, according to the Food and Agriculture Organization.

“I think there’s a bigger change than is controllable locally,” says Lola Castro, World Food Programme country director and head of the United Nations’ humanitarian team in the country.

Development analysts have studied ways to weather the storm. One of these is encouraging people to change their crops with the weather patterns.

In Mozambique the risk of flooding remains high because farmers plant in flood plains. “It is Impossible to change people planting in low areas,” explains Castro. “That is the fertile area.”

Authorities therefore encourage farmers to use more robust crops, which can survive in higher, drier areas.

This means planting more cassava, sorghum, and millet, says Castro. Another measure is using crops that have shorter gestation cycles so farmers can harvest more quickly and make the most of one season, argues Buque.

“Hundred-twenty-five-day crop cycles are too long. We should start developing 90-day-cycle crops to capitalise on the wet season.”

Such solutions may well prove the difference between life and death for Mozambique’s forgotten millions. Changing traditions that were formed over centuries of generations, however, is probably a different task altogether.