MAPUTO, Jun 5 2012 (IPS) - When you board Mozambique’s national carrier, Linhas Aéreas de Moçambique, you will most likely be given small blue packets of peanuts to munch as the jet whisks you from the country’s capital, Maputo, to as far afield as Europe. Sugar, salt or chilli flavour. Take your pick. 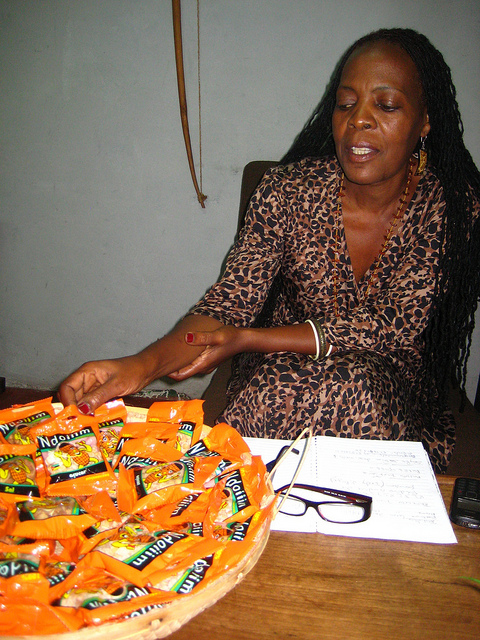 The snack, also available in bright orange packaging, is called Ndoiiim, a shortened version of the Portuguese amendoim, which simply means peanuts. And it is the brainchild of Lucia Bebane, an entrepreneur who is carving out a place for her small company in this southern African country despite the harsh conditions for businesspeople here.

Bebane’s story is unique in Mozambique, where small and medium enterprises (SMEs) contribute up to 70 percent of GDP. But despite this, SMEs here do not produce much or make significant profits.

The National Statistics Institute estimates that the country’s per capita GDP was just 423 dollars in 2010. In contrast, per capita GDP in neighbouring South Africa was almost 25 times more, at 10,700 dollars, in 2010.

It is an economic climate in which many companies fail.

“To start something is hard. There are some entrepreneurs in this country, but Mozambicans have a tendency to imitate what others do,” says Bebane.

For example, the traders who roam Maputo’s streets all sell the same peanuts in the same bags.

Three years ago the 54-year-old former secretary saw the traders and had an idea to process the locally-grown peanut into a product that can compete with the best on the market.

“It was almost impossible … because no one had done it here before,” she explains as a peanut toaster whines loudly in the small factory outside her office.

Bebane is the first Mozambican to roast and package peanuts on an industrial scale here. Whereas peanut sellers manually roast the nuts and pack them by hand, she was the first to import roasting and packaging machines and thereby mechanise the entire process.

Mozambique is one of the world’s poorest countries: over 54 percent of the population is living below the poverty line, according to the country’s Millennium Development Goals report to the United Nations in 2010.

It also lacks the industries and infrastructure which are taken for granted elsewhere. There are no roads linking factories to markets, the electricity supply is often unstable, and there are no machinery manufacturers, forcing Bebane to import the machines she needed for her business.

But a few years after her company started “in a timid manner,” production is now almost completely mechanised. Raw peanuts are trucked in from the northern city of Nampula, which is about 1,400 kilometres from Maputo.

When the peanuts arrive, Bebane’s three permanent employees sort the best from the rest. One machine roasts and flavours the peanuts, and another packages them in the bright orange plastic bags that have become part of her now-visible brand.

But despite selling her peanuts to the country’s national airline, Bebane says that she still barely manages to pay the bills and is waiting to make a profit.

“Mozambique’s economy is growing, which means there are more and better business opportunities. However, there isn’t an entrepreneurial tradition in modern-day formal companies.”

Mozambique’s economy grew by a whopping 7.3 percent in 2011, but companies have not grown with it.

“Companies are generally not very modernised and aren’t used to working in competitive environments. That’s why they are not competitive themselves,” Mosca tells IPS.

Throughout Mozambique’s modern history small businesses have had it rough. During colonialism under Portugal, Mozambican traders could not develop. The country adopted socialism after independence in 1975 and actively suppressed free enterprise, explains Mosca.

Entrepreneurship only emerged in the late 1980s to a limited extent, but then politicians grabbed the opportunity to monopolise the economy, he says.

“This emergence was politicised so that politicians had privileged access to privatised companies, many of them sold at symbolic prices. These businesspeople formed economic interest groups with sweeping protection against public policy, access to credit and selective law enforcement,” he says.

So in order to get as far as she has, Bebane has had to avoid the pitfalls of a corrupt and nepotistic system and raise her own capital.

The report “Corruption Assessment: Mozambique” commissioned in 2005 by USAID, the U.S. government agency providing economic and humanitarian assistance, pointed to “favouritism and nepotism in public appointments and procurements, conflicts of interest and insider dealing that benefit friends, relatives and political allies, and political party and electoral decisions that reduce democratic choices and citizen participation.”

So entrepreneurs like Bebane, who are less well connected, struggle to find the money to breathe life into their companies.

“Another problem is not the lack of ideas, but the risk of entering the market. You have no family to guarantee loans, you have to borrow from the bank,” says Bebane. “I had to put up my house as collateral.”

More needs to be done before the country’s smaller businesses start making money and raise people from below the poverty line, says Mosca.

But the task is daunting.

“We need to improve the business environment – especially access to credit and the cost of borrowing money – reduce corruption and institutional disorder, and create a more open and competitive market. We need to train human resources, with specific attention to quality,” he says.

Teaming up with companies from outside Mozambique could be healthy for the business sector, Mosca says.

“Partnerships with foreign business can be a way to speed up the birth of entrepreneurial and competitive capitalism,” he tells IPS.

Bebane is not merely waiting for her business to improve. She is searching outside Mozambique’s borders for security and a business partner who will hopefully help propel her towards success.

“I am running from one end to the other, looking at China, looking at Brazil, looking for a permanent partner.”