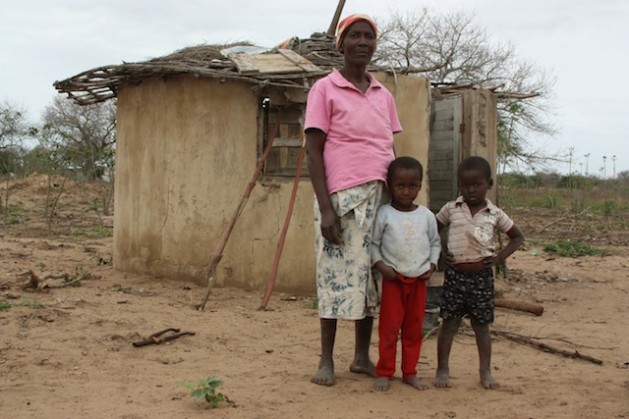 Sep 20 2012 (IPS) - Carolina Poalo strikes the dry earth over and over with her hoe, her frail body bent almost double. She is determined to begin planting. During the long, dry season in Mozambique, she and her two young grandchildren have eaten little but cassava leaves.

In a country where the average life expectancy is 50, the 65-year-old is considered very old, but her golden years are far from restful.

Instead, life is a constant battle for the many elderly living in the semi-rural outskirts of the capital, Maputo.

Violence and abuse against the elderly – ranging from rape to psychological abuse and neglect – are on the rise, say authorities. Often this is linked to witchcraft accusations, although no official statistics exist about the phenomenon. Perpetrators are often family members.

Carolina Paolo’s sister, Amelia Paolo, fled her home when her sons accused her of witchcraft. “They threw me out, calling me a witch,” she tells IPS. “I only survived thanks to my plot of land.”

It was a bit unclear how she got access to land where she lives now, but she has a plot of land next door to her sister’s in Bilalwane, on the outskirts of Maputo.

“I don’t get any help from my children. Sometimes they dump their kids here when they get pregnant,” Carolina Paolo tells IPS of her two daughters.

The women survive by earning extra cash when they can, working in nearby fields. The five dollars a month state elderly grant, the lowest in Southern Africa, is enough to buy them a one-kilogramme bag of salt. With no access to running water, the money also comes in handy when filling up at a nearby tap – one barrel of water costs them three cents.

Mozambique’s social welfare office is notoriously corrupt and inefficient. Only one in three people interviewed by IPS said they received the grant despite all three having applied for it.

Her body shrunken and her eyes grown over with cataracts, Maria Chambale (70) admits she is frightened of what might happen when she can no longer work, “I must go on fighting,” she says and shrugs. “What else can I do?”

She, like the other elderly in Mozambique, works on her own small plot of land to grow vegetables to feed herself. She also accepts “piece jobs” or day jobs in nearby fields owned by richer neighbours who have land but do not have the time to farm it.

Despite the heady pace of Mozambique’s economic growth – the World Bank expects the economy to expand by 7.5 percent in 2012 – little benefit is trickling down to the poor, many of whom are elderly people.

“Sixty-eight percent of the elderly live below the poverty line in Mozambique,” says Janet Duffield, the director of the aid agency HelpAge International in this country.

For the elderly in the city who cannot grow food to feed themselves, conditions are even worse.

Sixty-year-old Armando Mattheus is amongst the many elderly people who now find themselves begging on the streets of the capital, unable to cope with the high cost of living. “Before I could buy something with the little I have but today I can’t buy anything,” says Mattheus, who spends his days outside a popular Maputo restaurant, begging tourists for handouts.

It is a situation experts say Mozambique’s government needs to address urgently. Eighty percent of people work well into old age in Mozambique – one of the highest rates in the world.

“The population in Mozambique works until they die because there aren’t alternatives,” says the director of Mozambique’s Institute of Social and Economic Studies, António Francisco.

With half its population of 23 million under 18 years old, Mozambique is often referred to as a country of young people. Those who can remember the devastating civil war that ended two decades ago are now in the minority.

Newly discovered natural gas and coal deposits promise untold riches for a lucky few and will soon fuel what is already one of the world’s fastest growing economies.

The aged make up a tiny fraction of the population – just five percent.  However, by the time a child born today reaches 60, that number will be nearly three times as high, according to Francisco’s research. This represents, he says, “an unprecedented demographic transformation in the history of Mozambique.”

Nearby countries – South Africa, Swaziland, Botswana, Namibia and Lesotho – all spend between 0.3 and two percent of GDP on grants for the elderly. Like Mozambique, they have a young population structure but such an approach can pay dividends.

Studies show that providing state pensions can reduce hunger and poverty because elderly people share resources with the family.

A 2003 study by HelpAge International found that “social pensions increase the income of the poorest five percent of the population by 100 percent in Brazil and 50 percent in South Africa.” And a 2005 study by the University of Manchester in the U.K. found that people living in households receiving a pension were 18 percent less likely to be poor in Brazil and 12.5 percent less likely in South Africa.

One fifth of all families in Mozambique include an elderly person. This is one reason why aid agencies are pushing the government to fall into step with other countries in the region. Another is that 43 percent of orphans are cared for by grandparents in Mozambique. The country has an HIV prevalence rate of 16.2 percent, one of the highest rates in the world.

“Of the 10 African countries with the highest HIV prevalence, eight have introduced some form of social pension or cash transfer directed at older people,” says Duffield.

The government would need to provide citizens over 60 with a minimum of 26 dollars a month to have an impact, estimates Francisco. The figure represents three percent of the country’s 12.8-billion-dollar GDP.

But universal social pensions would be too costly, argues Felix Matusse, who heads the government’s Department for the Elderly. “We still depend on external aid,” he explains, pointing out that foreign donors contribute over 30 percent of the entire state budget.

But the government cannot go on pleading poverty for long. By some estimates, Mozambique stands to collect over five billion dollars a year in the long term from its natural gas alone.

Bolivia, South America’s poorest country, financed its universal pension scheme or “Dignity Pension” in 2007 through a direct hydrocarbon tax. Could Mozambique do the same?

“Improved revenue collection from new-found mineral resources could free up fiscal space more than adequate to provide a cash transfer for all older people,” suggests Duffield.

Others argue that caring for the elderly should not have to depend on hydrocarbon windfalls. “What kind of state do we have that cannot look after five percent of its population?” asks Francisco, adding that nearby Lesotho finances a pension scheme but has no natural resources to speak of.

Few expect a major shift in government policy on pensions before the next national elections in 2014. But in the run-up, the government is showing greater willingness to tackle its elderly problem.

A draft bill, due to go to parliament before the end of the year, aims to protect the aged from abuse, meting out specific tough penalties for violence related to witchcraft accusations. However, there is no mention of universal old age pensions.

Matusse points out that Mozambique will not begin to reap the benefits of hydrocarbons for at least another five years. “Then we will see what is going to happen in terms of social security,” he says.