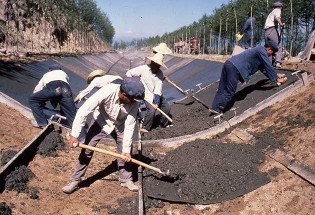 By Trevor Page
From an international humanitarian perspective, the first half of 2021 has been disappointing. We’re no further ahead in ending the conflict in Syria and Yemen. From the fledgling democracy that it had become, Myanmar has descended into what most of its people had hoped was a bygone era of military rule. And in Ethiopia, where its Prime Minister, Ably Ahmed, was awarded the Nobel Peace Prize in 2019, armed conflict in Tigray is preventing the 2020 winners of the very same prize, the World Food Programme, from delivering the food needed to stop at least 350,000 Ethiopians from starving to death.

By Trevor Page
Most people around the world were glad to see the back of 2020: From the devastating bushfires in Australia to the plagues of locusts through East Africa stretching across Arabia to Pakistan, extreme weather, melting ice sheets at the poles, and Covid-19 that still engulfs the globe.

By Trevor Page
Climate change is on us. Parts of the planet are burning up. Heatwaves across the northern hemisphere have dried vegetation and withered crops. Forests are ablaze in North America, Europe and Asia – even as far north as the Arctic Circle. The polar ice caps are melting and sea levels are rising. Massive storms and floods have devastated communities. Deserts continue relentlessly to encroach. And the extraordinarily hot spells this summer followed on from the extraordinarily cold spells of last winter. In 2018, extreme weather is the order of the day.
ADVERTISEMENT ADVERTISEMENT