Stories written by Walden Bello
Walden Bello is executive director of the Bangkok-based Focus on the Global South. 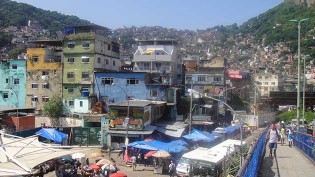 IMPERIAL DECLINE AND THE PROSPECTS FOR A JUST PEACE IN PALESTINE

By Walden Bello
For more than half a century, the gushing wound of Palestine has assaulted the global conscience, continuously reminding people everywhere of the imperial atrocities of Israel and the US in the Middle East and other areas.

NEOLIBERALISM: A SURVIVOR BY DEFAULT

By Ignacio Ramonet and Walden Bello
The recent collapse of the global economy, caused by among other things the lack of regulation of financial markets, has further eroded the credibility of neoliberalism. And yet it continues to exercise a strong influence on the majority of economists and economic managers, for whom, despite its obvious shortcomings, it remains the default discourse.

Q&A: ‘It Is Time to Aim Beyond Capitalism’

By Walden Bello
The World Social Forum meeting this week in this city in Brazil’s Amazon jungle region has an urgent and crucial task: coming up with alternative solutions for the global crisis of capitalism now under way, and pushing for democratic control of the economy and state worldwide, Filipino academic, author and activist Walden Bello tells TerraViva editor Alejandro Kirk in this interview.

EAST ASIA: THE END OF AN ERA

By Walden Bello
As the US recession drags Asia down, there has been much speculation about a regional response to the crisis. Seemingly lending substance to this have been a trilateral summit of the leaders of China, Japan, and South Korea last December and a flurry of bilateral talks between Japan's Taro Aso and Korea's Lee Myung-bak, all of which had economic cooperation at the top of the agenda.

By Walden Bello
With the United States represented by outgoing President George W. Bush, not much can be expected of the Dec. 1-12 international conference on climate change in the Polish city of Poznan, activist Walden Bello, winner of the Alternative Nobel Prize 2003, told IPS.

By Walden Bello
For the thousands of representatives of global civil society gathering in Mumbai, India, for the World Social Forum from January 16-22, Washington is the world\'s number one problem, writes Walden Bello, professor of sociology and public administration at the University of the Philippines, executive director of the Bangkok-based research and advocacy institute Focus on the Global South, and a recipient of the Right Livelihood Award for 2003. But the US they confront today is not quite the same cocksure superpower of yesterday. The Iraq quagmire and the collapse of the WTO Cancun ministerial were just two manifestations of that fatal disease of empires: over-extension. Then there is the failure to consolidate a dependent regime in Afghanistan and to stabilise the Palestine situation, the boost given to Islamic extremism by US-led invasions; the unravelling of the Atlantic Alliance that won the Cold War; plus the emergence of anti-US, anti-free-market regimes in Brazil and Venezuela. Is the US in a no-win situation? Bello asks in this article. The crowds in Mumbai will undoubtedly continue to regard the US as a mortal threat to global peace and justice, but they will also be cheered by the increasing difficulties of an arrogant empire that failed to see that decline is inevitable and that the challenge is not to resist the process but to manage it deftly.

By Walden Bello
The mood of this year\'s World Social Forum is likely to be affected by the tsunami tragedy in South as well as the changed national context in the host country: the fiscally-conservative policies adopted by the Lula government, which have generated high unemployment and little growth, writes Walden Bello. executive director of the Bangkok-based Focus on the Global South. In this article, Bello writes that the debate over the effects of globalisation has long been won by its critics, yet neoliberal policies continue to reign in most developing countries, often in the guise of World Bank-sponsored macroeconomic strategies. Bello writes that the war in Iraq will be a central concern of the meeting. It was, after all, at a WSF-related event, the 2002 European Social Forum in Florence, that the call was issued for the global anti-war march that brought out hundreds of millions of people throughout the world on February 15, 2003. That the WSF has survived and become an institution demonstrates that it has tapped into the vast reservoir of energy of global civil society. This column is part of the special series on \"Globalisation & Human Rights\", a joint effort of Dignity International (http://www.dignityinternational.org) and the IPS Columnist Service.

A YEAR IN THE LIFE OF THE WORLD SOCIAL FORUM:

By Walden Bello
The World Social Forum (WSF), to be held January 23-28 for the third year in Porto Alegre, Brazil, has become the prime organisational expression of a surging movement against corporate-driven globalisation and, this year, US plans to launch a war on Iraq, writes Walden Bello, professor of sociology and public administration at the University of the Philippines and executive director of the Bangkok-based Focus on the Global South.

A YEAR IN THE LIFE OF THE WORLD SOCIAL FORUM

By Walden Bello
The World Social Forum (WSF), to be held January 23-28 for the third year in Porto Alegre, Brazil, has become the prime organisational expression of a surging movement against corporate-driven globalisation and, this year, US plans to launch a war on Iraq, writes Walden Bello, professor of sociology and public administration at the University of the Philippines and executive director of the Bangkok-based Focus on the Global South. This year\'s meeting will be the culmination of an exciting year-long global process, including Porto Alegre-style social forums in a number of cities, including Buenos Aires and Caracas, and regional social forums: the European Social Forum in Florence, Italy, on November 6-9, 2002, and the recently- concluded Asian Social Forum (ASF) in Hyderabad, India. Since Seattle, the anti-corporate globalisation movement has attained critical mass globally, in the sense that its ability to mass forces at significant junctures, such as the December 1999 Seattle WTO ministerial and the July 2001 Genoa meeting of the Group of Eight, enabled it to effect international developments and acquire a high ideological and political profile globally. Not surprisingly, many of those at the WSF will be coming with one question uppermost in their mind: What can the victory of Lula and the PT teach us about coming to power in our countries? And this year\'s WSF will be, in many ways, a celebration of a movement that, by achieving a remarkable measure of political unity amidst diversity, has changed the face of Brazilian politics.
ADVERTISEMENT ADVERTISEMENT