VITERBO, Italy, Dec 4 2008 (IPS) - With the United States represented by outgoing President George W. Bush, not much can be expected of the Dec. 1-12 international conference on climate change in the Polish city of Poznan, activist Walden Bello, winner of the Alternative Nobel Prize 2003, told IPS. 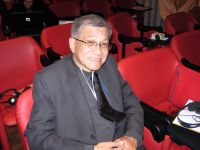 Bello, executive director of Focus on the Global South – a Bangkok-based policy research institute – and a professor of sociology and public administration at the University of the Philippines, is not known for mincing words.

He sat down with IPS on the sidelines of the VI International Media Forum of Greenaccord, an environmental group based in Italy, to discuss the current financial crisis, global warming and the challenges and opportunities facing U.S. President-elect Barack Obama. Excerpts of the interview follow:

IPS: Obama said recently that the Poznan conference would be vital. Moreover, at the Governors’ Global Climate Summit in Los Angeles, he added that the U.S. would invest 15 billion dollars annually to help the private sector develop and improve alternative energy, and promised to reduce emissions to 1990 levels within 12 years. Do you believe that this is the first step towards ratification of the Kyoto Protocol? WALDEN BELLO: Yes. I think that the Kyoto Protocol will in fact be ratified under the Obama administration, especially now that (the Democrats) have a majority in the Senate…But the Bush administration has always opposed mandatory reductions, so I believe that nothing good is going to happen in Poznan.

The other thing is what level of ambition Obama will have. It is not whether or not the U.S. ratifies the Kyoto Protocol. It is rather what they will commit to, especially when you have the current economic recession and there are a number of forces within the U.S. establishment saying you can’t pay attention to climate change right now…I think it would be a mistake for Obama to listen to them…If the U.S. is ambitious, then Europe will also be ambitious.

IPS: According to a report by The Independent newspaper, more than 60 nations, mainly in the developing world, will have hundreds of millions of “environmental refugees” caused by global warming. Does this mean a worsening situation for poor communities in Africa? WB: Yes, definitely. I think the problem is that communities that have contributed the least to global warming… are also the ones who are suffering the consequences in a major way. So I think this is a very serious problem… It is very important that we create mechanisms that will transfer both technologies as well as money to those communities.

IPS: According to a recent report of the U.N. Framework Convention on Climate Change (UNFCCC), emissions of greenhouse gases by industrialised countries grew by 2.3 percent from 2000 to 2006. However, the Kyoto Protocol was aimed at reducing emissions by 5.2 percent by 2008. What didn’t work? WB: I think several things. One is the level of ambitions of the Kyoto Protocol that has to be lower in terms of reduction. The second thing is the U.S. of course, which did not participate in the global regime of mandatory reductions, and created a lot of problems in terms of the legitimacy of the Kyoto Protocol.

I think we must realise that the Bush administration made a tremendous contribution to the deterioration of the climate. There should be a category of environmental crimes under the International Criminal Court (ICC). Bush should be prosecuted under it.

The incoming Obama administration must be aware that this is the time to have an effective protocol by getting mandatory commitments, particularly from the biggest greenhouse gas polluters, including the United States.

IPS: Developing countries, such as China and India that are about to overtake the U.S. as major producers of greenhouse gases, say that they will cut emissions only when the industrialised countries have done the same. Do you think that the EU and the U.S. should take the initiative? WB: In terms of responsibility for climate change, it has been the North, including Europe and the U.S., which have been most responsible for the historical accumulation of greenhouse gases. So the North should take the first step.

Unless Northern countries do that, India and China are not going to follow. That’s very understandable. Why commit yourself to a mandatory reduction when the key culprits are not willing to do so? This brings us to a negotiation with two phases: First, commitments by the U.S. and the others, and second, India and China, and maybe Brazil, also undertake mandatory reductions.

IPS: The World Bank has been accused of profiting from carbon credits. What do you think the World Bank’s role should be? WB: The World Bank should not have anything to do with the climate change mechanisms. It has a very bad record. The World Bank is spending much more on gasoline than on development or its commitment to alternative energy sources.

The U.N. Environment Programme alone should really be the mechanism for supporting financial initiatives against climate change. It could be a disaster if the World Bank were to take over these functions, apart from the fact that it is controlled by the rich countries and the banks, which are the wrong institutions to deal with climate change.

IPS: What are the limits standing in the way of sustainable development? WB: The real limit to sustainable development is not the lack of resources. The real limits are ideas and political will. If we have ideas and political will, we can achieve things even if we don’t have that many resources. If we have imagination and determination, if we are skilful and smart, we can commit to the welfare of the people and of the environment with wise political strategies.

*With collaboration by Miren Gutiérrez in Rome.