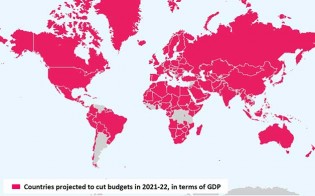 By Isabel Ortiz
The year 2020 is ending with the world caught up in an unprecedented human and economic crisis. The pandemic has contaminated 75 million people and killed 1.7 million. With the lockdowns, the global economy has suffered the worst recession in 75 years, causing the loss of income for millions of people. In such a bleak environment, what will the new year bring? Whilst uncertainty is the only certainty, eight points are likely to be key in the year ahead:

By Isabel Ortiz and Leo Baunach
On 27 August the World Bank announced that it will suspend the Doing Business Report over data irregularities, until it conducts a review and audit. The halting of the report was welcomed by trade unions, academics and human rights groups.

By Isabel Ortiz
Failing to help those in most need COVID19 is devastating on older persons. The numbers are staggering, more than 80 percent of the fatalities due to coronavirus in the US and East Asia occurred among adults aged 65 and over. In Europe and Australia, the figures are even higher, 94 and 97 per cent of the deaths were persons aged 60 and over.

By Isabel Ortiz and Matthew Cummins
While this week Ministers of Finance and economists meet in Washington to confront global economic challenges at the IMF and World Bank Annual Meetings, the majority of the world population lives with austerity cuts and see their living standards deteriorating. World leaders must reverse this trend.

By Isabel Ortiz
Analysis of the latest International Monetary Fund (IMF) expenditure projections for 187 countries between 2005 and 2020 reveals that there have been two distinct phases of government spending patterns since the onset of the global economic crisis.
ADVERTISEMENT ADVERTISEMENT