Interview with Dr. Walden Bello, executive director of Focus on the Global South 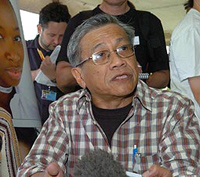 Born in the Philippines in 1945, Dr. Bello is the author of more than 10 books, including “People and Power in the Pacific” (1992), “Dark Victory: The United States and Global Poverty” (1999), “Global Finance: Thinking on regulating speculative capital markets” (2000) and “The Future in the Balance: Essays on globalisation and resistance” (2001).

After receiving a Ph.D from Princeton, he was arrested several times in the United States, peacefully protesting the Ferdinand Marcos dictatorship in his home country. Bello is the executive director of Focus on the Global South and a visiting professor in Southeast Asian Studies at the University of California at Los Angeles.

IPS: There seems to be consensus among economists that globalisation, as practiced by the Bretton Woods institutions, leads to greater income inequality but also to significant GDP growth. As one of Asia’s leading critics of the Bretton Woods model, don’t you feel that growth is necessary to pull people out of poverty, even if inequality is an initial byproduct?

However, certain social groups, especially in the rural areas, and lower-class groups in the cities, have gone into even greater poverty. In all countries in South East Asia and East Asia, you have greater inequality in income distribution. In practical terms, a great imbalance has grown between the cities and the countryside; people in the countryside have lost in absolute and relative terms compared to the city.

Furthermore, we have had tremendous rates of environmental destruction. The gains in terms of poverty reduction have been counterbalanced by these other trends. I am speaking only about East Asia in this regard; the other caveat I would say in regards to Vietnam is that Vietnam has done a better job in containing these contradictions compared to countries like China.

IPS: You have written that, “in the Third World the pendulum has swung so far in the direction of export-oriented production, that it does need to be corrected back towards the domestic market – the balance between the two has been lost in the drive to internationalise our economies.” Is this really true? A lot of economists think the expansion of China’s domestic consumer purchasing power will keep that country’s manufacturing base strong even if its export markets, like the United States, are faced with a recession. Do you think domestic markets in East Asia will be able to absorb current levels of economic activity?

Bello: There are certain groups who have gained in income, including the emerging sectors in the cities, especially the coastal cities. To some extent, they act as a supplement to export-orientated production.

The driving force is still export markets. To maintain that export edge, you have to be able to keep down your labour costs. Keeping down labour costs continues to be the main factor limiting domestic consumption growth. In China, raising the incomes of people is in severe contradiction with the demand of low wages to continue turning out cheap commodities.

There has to be a very significant u-turn to create healthy domestic markets. This turn can only happen with significant measures to redistribute income, to redistribute welfare. This isn’t going to happen so long as you have your eye on being competitive in export markets.

IPS: According to the environmental monitoring group the Worldwatch Institute, China now boasts 16 of the world’s 20 most polluted cities. What rate of economic growth would be a good balance between pulling people out of poverty and having some degree of environmental sustainability?

Bello: I want to say very strongly that we have to focus on a new paradigm of environmental sustainability. I am not talking about achieving 6-10 percent GDP growth, and just changing the driver from export markets to the domestic economy. I am talking about a whole reorientation.

I am really thinking about bringing growth rates, as measured in the traditional way, down to 2-3 percent. You can only do that with significant redistribution of the benefits of growth, so as to fulfill a large number of social demands with a relatively low growth rate.

My sense is that, so long as you have good government policies that support equitable distribution, you can achieve higher standards of living, even with growth rates that are not high in traditional terms. Certainly, the kind of 10 percent growth that China has been enjoying is out of the question; even 6-8 percent growth is out.

IPS: One position paper from your organisation, Focus on the Global South, touts ALBA, the Bolivarian Alternative for the Americas, as a possible regional integration model that might work in South East Asia and other regions. Do you think ALBA would even be possible without large amounts of Venezuelan oil and the petro-dollars that come with it? Basing a regional development strategy around crude oil exports to the U.S. isn’t necessarily the most sustainable practice.

Bello: The principles of ALBA, not necessary the wealth base, are what need to be reproduced; not everyone has those petro-dollars and environmentally it’s questionable as a long-run strategy.

The less powerful economies should have greater privileges than the more powerful economies, so regional cooperation increases their [lower income countries’] capacity rather than eroding it. ALBA focuses on building a regional market based on import substitution and technology sharing.

Certainly there are things that aren’t present in ALBA at the present time that would also be important to reproduce in other regional associations. The lesson we should be taking from ALBA is the move away from free trade towards genuine economic cooperation.

IPS: Currently, most observers agree that China is not in a colonial relationship with other smaller and weaker nations in South East Asia. However, China is on track to displace the United States as the world’s largest economy by 2050 and some worry that China could become a metropolis gaining markets and raw materials from a South East Asian hinterland. Do you think China is on course to becoming a neo-colonial power?

Bello: Definitely, unless there is more real planning, setting firm the principles of mutual and equitable relationships, on the part of China in terms of its relations with other countries.

China needs to create standards and policies for its transnational corporations operating abroad. Unless these things happen, the old colonial relationship could be reproduced.

There is tremendous demand in China for raw materials and a whole bunch of other things; China has the capital to export. The structural drives for a new periphery- metropolis are there; they need to be countered by policies, strong counteractive state policies from China. We have the opportunity at this point to have new relations between developing countries and China that do not reproduce the old colonial relationship. But we have to act soon.