"Ear to the Ground" 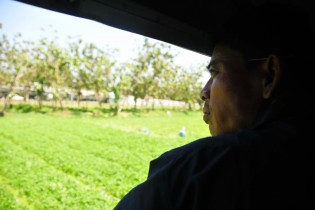 By IPS Correspondents
In Cameroon Information and Communication Technologies education is not universally accessible to Primary and secondary school children. A non-governmental organization called Ramsi ICT's House is filling the void by introducing school children to use computers, telephones and digital cameras.

Youth grow flowers to get money

By IPS Correspondents
Farming flowers in slums is becoming an option for jobless youths in cities across Cameroon. Flowers and ornamental trees are planted to decorate compounds ,roadsides, lanes and tourism sites. Aaron Kaah reports.

Civil Society organisations are sticking to their guns: Women will be hardest hit by the climate change

By Zukiswa Zimela
Civil Society organisations are sticking to their guns: Women will be hardest hit by the climate change. Zuki Zimela reports from COP 17 in Durban.

By Sandra Ferrari
Last month in Ghana, community radio advocates and civil society members rallied through the streets of Accra in what they called a “Voice Walk” and Ghana's National Communications Authority calls “hostile” and  ‘irresponsible”. Sandra Ferrari compiled this report

By Sam Olukoya
Women in West Africa have over the years relied on fishing and farming as their traditional source of income. But as Sam Olukoya reports from Lagos, changing weather patterns caused by climate change have put their livelihood under threat.

By IPS Correspondents
Women coffee growers speak to Martha Nyambura about the impact of climate change on their production.

By Zukiswa Zimela
Stakeholders in agriculture from Western and Central Africa are meeting in Gabon for the 6th International  Fund for Agricultural Development (IFAD) regional forum. As Zukiswa Zimela reports, they are talking about the challenges facing smallholder farmers.

By Zukiswa Zimela
The South African Development Community says states need to protect their forrests as a region. SADC is preparing to put their case before COP 17 in Durban later this month. Zukiswa Zimela reports from the SADC headquarters in Botswana.

By Tinus de Jager
The Southern African Confederation of Agricultural Unions, SACAU, says the COP17 discussions in Durban later this month is an opportunity to put agriculture on the climate change map. Tinus de Jager asked Ishmael Sunga, the confederation CEO, what they are pushing for at the end of November.

By Zukiswa Zimela
Legal experts say that the African Court on Human and People's rights needs to be more visible on the continent. Zukiswa Zimela reports from the Pan African Parliament in Johannesburg that governments and leaders will also have to give up some power to make the court work.

By Brian Moonga
A lack of access to medicines due to prohibitive costs is driving some Zambians to use the cheapest remedies they can find and, as Brian Moonga reports, this has some serious health implications:

By IPS Correspondents
A lack of knowledge about the auto-immune disease Lupus, even amongst health professionals, is putting people in Africa at risk. Victims are not being diagnosed and the lucky few cannot access or afford treatment.

By IPS Correspondents
South Africa faces an increasing burden of cardiovascular disease among the poor. Experts say awareness needs to be raised among the poor, to ensure they benefit from better tests for heart disease, dietary information and health care.

By Zukiswa Zimela
Members of the Pan African Parliament say legislative powers will help them to better represent the people of the continent. Zukiswa Zimela is at the fifth ordinary session of PAP in Midrand and she filed this report:

By Zukiswa Zimela
Women should take a more active role in ensuring peace and security on the African continent. Zukiswa Zimela reports from the fifth ordinary session of the Pan African Parliament in Midrand, South Africa.
Next Page »
ADVERTISEMENT ADVERTISEMENT