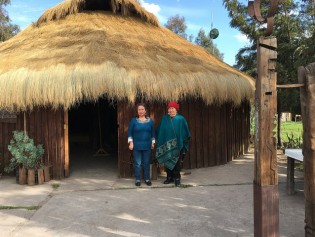 By Marianela Jarroud
“This is paradise and they want to destroy it. This has had an enormous psychological impact on us,” says Guido Melinao, leader of the Mapuche indigenous community of Valeriano Cayicul, referring to the Neltume hydroelectric power plant project planned by the Spanish-Italian consortium Endesa-Enel.

By Marianela Jarroud
A string of attacks in the southern Chilean region of Araucanía, where native Mapuche people are struggling for their land rights, puts the spotlight squarely on what analysts call the "supine ignorance" displayed by authorities about the country's history.

By Marianela Jarroud
“This is a project that reflects the occupation…of Mapuche territory,” said Iván Reyes, an indigenous leader staunchly opposed to the construction of an international airport in the southern Chilean region of Araucanía.
ADVERTISEMENT ADVERTISEMENT