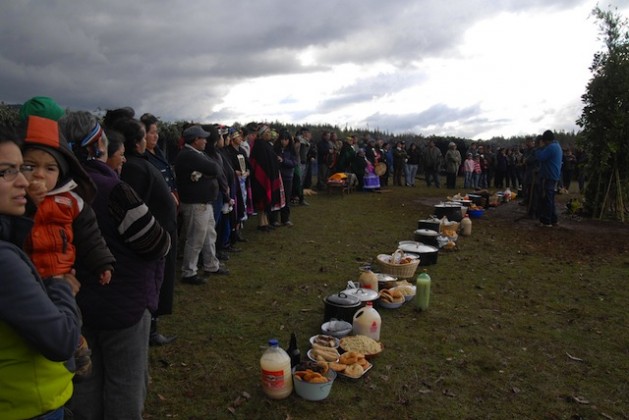 SANTIAGO, Jan 8 2013 (IPS) - A string of attacks in the southern Chilean region of Araucanía, where native Mapuche people are struggling for their land rights, puts the spotlight squarely on what analysts call the “supine ignorance” displayed by authorities about the country’s history.

Two persons died in an arson attack on Friday Jan. 4 in one of a series of recent crimes in the so-called “red zone”, the epicentre of the Mapuche conflict, which has often been marred by violence and frequently met with bloody retaliation from security forces. There were more incidents over the weekend, including the torching of lumber trucks, in which no one was injured.

The Mapuche, the country’s largest indigenous group, numbering some 700,000 people, are demanding the return of their ancestral lands.

Wealthy landowner and forestry businessman Werner Luchsinger and his wife Vivianne McKay died on their Lumahue ranch, in the municipality of Vilcún, 640 kilometres south of Santiago, when their home was burned to the ground.

Preliminary police reports indicated that the perpetrators were 20 masked or hooded individuals who set fire to the property belonging to the 75-year-old timber tycoon, who fought the attackers with gunfire until he was overwhelmed.

A man fleeing the scene, suffering from a gunshot wound, was arrested by police. The justice authorities have designated a prosecutor specifically for this investigation.

The government of rightwing President Sebastián Piñera announced it would invoke the Anti-Terrorist Law inherited from the 1973-1990 dictatorship of Augusto Pinochet, a move rejected by the National Institute for Human Rights on the grounds that the law “violates the principles of due process.”

Piñera cancelled his official agenda and went immediately to Araucanía, where he announced the creation of a specialist anti-terrorist unit and a controlled zone with a perimeter and roadblocks for checking the identities of vehicles and pedestrians.

He also ordered an increase in police presence in the area, heightening criticisms that there is already excessive “militarisation” in the region.

Piñera categorically stated that his government would continue to work to combat extreme violence and terrorism, and would use all legal instruments in its power.

“We will not hesitate to apply the full weight of the law until we defeat the terrorists and give back to this region the right to live in peace,” he said.

Near the burned down house, carabineros (militarised police) found pamphlets referring to the murder in January 2008 of Matías Catrileo, a Mapuche student leader and one of the 11 indigenous people killed since ancestral land claims activism was renewed in the early 1990s.

Catrileo was murdered on the Santa Margarita estate, owned by Jorge Luchsinger, the cousin of the businessman who died last Friday and one of the most adamant opponents of Mapuche demands.

After the attack, Jorge Luchsinger told Radio Agricultura that violence in the region is at unacceptable levels, that “the rule of law is non-existent” in Chile and that “the guerrillas are winning.”

“This is a paramilitary commando, with paramilitary training, and no matter where they have been trained, what matters is that they are taking action,” he said.

The alleged existence of a trained group for violent action in the context of the Mapuche struggle is a common belief among conservative sectors in Chile. On Dec. 25 Interior Minister Andrés Chadwick said the authorities are facing “a powerful enemy that enjoys political and international support,” although he did not give further details.

However, days later, after receiving harsh criticism for his statements, Chadwick clarified that the “violent elements” are “a small group of violent people who have no connection with the Mapuche people,” a view that Piñera confirmed on Friday.

Domingo Namuncura, former head of the National Indigenous Development Corporation (CONADI), told IPS that the conflict in Araucanía could spiral out of control because of nearly two decades of inadequate responses from the state and successive governments to Mapuche demands, the behaviour of the forces of public order and “the climate of repression in different areas” of the region.

In his view, the root of the problem is that “the Indian question has never been regarded as an issue of political rights in the culture of political movements, let alone in conservative sectors.”

For his part, Pedro Cayuqueo, a native Mapuche and the editor of the newspaper Mapuche Times, said this arson attack reflects the “abandonment of the authorities’ political responsibility to handle the conflict, and their insistence on using repressive measures that merely inflame antagonisms and produce this kind of escalation.

“This is a historical and political conflict that requires solutions that involve changes in the model of the state, development, and the vision of how Chile as a country is to build its future,” Cayuqueo told IPS.

“The worst of the conflict is limited to very specific rural areas,” Cayuqueo said. “Araucanía is not a region in flames or a region at war.” He stressed that ignorance “of the region’s appalling history is what makes the authorities apparently surprised by what is happening here.

“There is absolute unawareness of how the Chilean state took over this region, when the military invasion occurred, the death and desolation involved in that takeover, and also how settlers came from Europe, brought by the national authorities who gave them Mapuche land,” he said.

Cayuqueo said the conflict between local Mapuche communities and the Luchsinger family dated back 90 years, when the latter arrived in Chile as settlers from Switzerland.

Meanwhile, lawyer Alberto Coddou, a researcher with Diego Portales University’s Human Rights Programme, called for “a structural and systematic rethinking of what the Chilean state is doing” in Araucanía.

This implies “taking on board all of the history, and perhaps redefining the state, as they did in Canada, Norway and New Zealand, where they developed a much more systematic state policy toward native peoples,” he concluded.