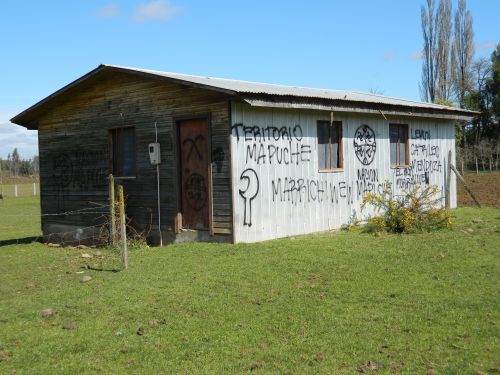 The Rofue community centre, covered with slogans from the Mapuche struggle for land and rights. Credit: Marianela Jarroud/IPS

TEMUCO, Chile , Nov 28 2012 (IPS) - “This is a project that reflects the occupation…of Mapuche territory,” said Iván Reyes, an indigenous leader staunchly opposed to the construction of an international airport in the southern Chilean region of Araucanía.

Reyes, an agricultural technician, said the construction project was approved thanks to an environmental impact study “based on lies” that was carried out by Arcadis Geotécnica, the Chilean subsidiary of a Netherlands-based international consulting and engineering company.

The study “says there will be no impact on communities in the area. But in a later analysis, we detected that the base line and measurements had been manipulated,” he said.

The new airport, whose construction was actually approved in 2005, is now one of the most high-profile projects of the right-wing government of Sebastián Piñera. It is being built in Quepe, 20 km from the city of Temuco and nearly 700 km south of Santiago.

The La Araucanía New International Airport, which will replace the Maquehue Airport, will have a 2,440-metre runway and a 5,000-square-metre passenger terminal.

The Chilean company Belfi, which was granted the concession for 20 years, is building the new airport.

“This is an emblematic project for this region,” the governor of La Araucanía, Andrés Molina, told IPS.

“Our Maquehue Airport is one of the worst-situated in the country, with a runway that is hard to land on, and with a difficult approach, because of the fog over the hills of Temuco,” he said.

Temuco, which is halfway between the Pacific Ocean and the Andes foothills, is in the middle of prairies, pasture and farmland, and forests.

The new airport will be built in this agricultural and forested area, at a cost of more than 120 million dollars. “Tourism in this area is growing by 30 percent a year, which offers interesting prospects,” Molina said.

Although a few Mapuche communities support the new airport, which they see as a step forward for the region in terms of economic and cultural development, many others are staunchly opposed, arguing that it will undermine biodiversity and the environment, and will destroy their ancestral territory.

The Mapuche, Chile’s largest indigenous group, number nearly one million in this country of over 16 million people, and the struggle for their ancestral land in the south of the country has frequently pitted them against large landholders, logging companies and other private interests.

“This is the straw that broke the camel’s back, in terms of economic interference in Mapuche territory,” Fidel Tranamil, a traditional “machi” or healer, told IPS. “We already have the logging and hydroelectric companies…We are culturally invaded by politics and religion, and the life of the Mapuche people would be put at further risk by the new airport.”

At the age of 23, Tranamil is already a Mapuche leader, in charge of the religious life of his community, Rofue. He is tenaciously opposed to the construction of the airport, which he describes as “a gateway to invade Mapuche territory.”

Tranamil, or “machi Fidel” as he is known by the local community, is one of the most active indigenous leaders in the area. He has been arrested several times, and his home is frequently searched by the police. Since 2005, his mother has been living with seven pellets in her right knee, after a harsh police crackdown on a protest.

Many of Tranamil’s “peñis” (brothers and sisters) have been prosecuted under Chile’s draconian counter-terrorism law, inherited from the 1973-1990 military dictatorship of General Augusto Pinochet.

The law, which has been widely criticised by international bodies such as the Inter-American Commission on Human Rights, has been used to squelch activism by Mapuche people demanding the return of their ancestral land.

The house where Tranamil and his mother live is warm and quiet. They raise pigs and chickens, and have a small vegetable garden.

“But soon, airliners will be landing every minute. That will not only violate our spiritual life but also our culture and harmony,” he said.

He also said that to build the airport, “between 200 and 300 hectares of native (old-growth) forest will be cut down, and lost forever. It would take 400 years for the trees to grow back to their current height.”

But Molina argued that opposition to large projects like the airport is the work of “leaders who have emerged under the wing of leftist parties, and who don’t care about their communities, but are motivated by ideological concerns.”

Meanwhile, construction of the airport is moving ahead, despite attempts by Mapuche activists to block it, including cases brought in court, which were dismissed.

In September 2011, Tranamil himself turned to the United Nations Human Rights Council to denounce that the airport was being built “without consultation with the concerned communities, in contravention of” International Labour Organisation Convention 169 concerning indigenous and tribal peoples.

But Molina maintained that the communities were consulted. He said that a working group was set up and that the government had been providing support “in the areas of productive development, infrastructure and housing.”

Despite his opposition to the project, Reyes said “the world is not going to end because an airport is built.

“Do you hear the noise from the highway? Later we’ll have the noise of the airplanes, just like we have the high-voltage power lines, and the railroad,” he said, with a resigned tone.

“The important thing is that the airport has reawakened the dormant Mapuche activism and mobilised our communities once again,” he said. “In the wider context, planes flying 100 or 50 metres over our heads are a minor problem.”