RIGHTS-CHILE: In the Mapuche People’s Heartland

TEMUCUICUI, Chile, Feb 7 2008 (IPS) - Before the latest outbreak of protests and unrest among Mapuche Indians in the southern Chilean region of Araucanía, IPS visited the village of Temucuicui, whose residents have complained for years about judicial persecution and police brutality in response to their claims to their ancestral land. 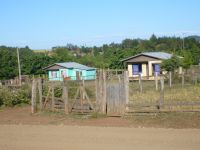 On their own territory, they shared what keeps them going, their sorrows and their hopes.

“It hurts to see my land surrounded by carabineros (militarised police). Why should I be watched over, controlled, kept prisoner in my own territory?” said 30-year-old Jorge Huenchullán, both angry and sad. The “werkén” (spokesman) for the community, he has been accused of several crimes, as have other villagers in Temucuicui.

According to statistics from 2006, the Mapuche (which means “people of the land” in their language, Mapuzungun) number just under 923,000 people, representing 87 percent of the indigenous population in this country of 15.6 million.

The village of Temucuicui (the native term for “bridge made of temu”, a local tree species), is home to 120 families and is located in a rural area in the district of Ercilla, in Araucanía.

The day he was interviewed by IPS, Huenchullán had to raise 500 dollars somehow to post bail for his brother Jaime, a 28-year-old craftsman who spent nearly five months in preventive custody for one of the six cases brought against him in court.

Jaime is accused of disobeying the authorities, attempted arson, and threats and damages against a neighbour, René Urban, a farmer of Swiss origin. Before being apprehended, he spent 18 months on the run. Along with the dozen or so other people from Temucuicui wanted by the justice authorities, he claims he is innocent.

Due to the large number of attacks on Urban’s property in the past few years, he has been provided with permanent police protection. On a visit to the area, IPS observed the presence of carabineros: a patrol car stationed at a crossroads near the community, and a busload of police troops at the entrance to the large estate.

The Mapuche regard this as “militarisation” of their territory.

Griselda, Jaime’s 27-year-old wife and mother of two, demands an end to the night-time police raids in search of evidence and fugitives. “How long is this suffering going to last? I feel for my frightened children, who play at fighting and hiding from the carabineros. They’re receiving psychological treatment because they cry a lot and have a hard time sleeping at night,” she says, in tears.

Her anxiety is such that she is afraid they will kill her by mistake, while she feeds the pigs or fetches wood, she says. When her husband was in jail, she survived on the monthly subsidy of 40 dollars given by the government for her two children, and the solidarity of her friends and community members.

The Huenchulláns raise livestock and grow potatoes, peas and beans as subsistence farmers. “We produce in small quantities because we have not been able to work in peace: we’re in and out of jail, one comes out and another ‘peñi’ (brother) goes in, and we have to help him to get out,” Jaime, now free again, tells IPS.

Temucuicui’s werkén says that when Chile returned to democracy after the 1973-1990 dictatorship of General Augusto Pinochet, the community launched a “strategy for recovering their ancestral lands,” lost in the late 19th century because they were occupied by the state in the process known as the “Pacification of Araucanía”.

Until 2002, the community’s 120 families lived on only 250 hectares. After several confrontations with the Mininco forestry company which owned the land they were claiming, the state National Corporation for Indigenous Development (CONADI) bought the land using its Land Fund, and restored it to the community.

According to CONADI, Temucuicui received 1,937 hectares worth three million dollars at today’s value. Since 1990, the government has returned close to 500,000 hectares to Mapuche communities, and 500 communities are in the process of buying more.

But Temucuicui is claiming another 800 hectares which are privately owned. They want to get back everything they once owned and they will not stop until they get it, their werkén says. This attitude has won press attention for the community, and the dubious distinction of being labelled the most “radicalised” Mapuche community.

The indigenous people have not made further applications to CONADI because they are tired of dealing with red tape, says Jorge, who emphatically denies that his community has links with subversive leftwing groups, as some media outlets have speculated in recent months.

In an interview with IPS, the head of CONADI, Wilson Reyes, of the Atacameño ethnic group, recognised the administrative shortcomings of the Land Fund, but said that it “has been providing solutions.” The stand taken by Temucuicui is not shared by the majority of the Mapuche people, but it is “valid,” although it is also “complex from a legal standpoint,” he said.

Reyes stressed that the relationship between the state and indigenous peoples is a “process that has been maturing, and is not without difficulties.” They are working on the remaining challenges, he said.

In the early 1990s, part of the Mapuche people, dissatisfied with the culture of dependency fostered by the policies of the centre-left coalition which has been in power since 1990, started protesting and demanding greater territorial, political and cultural rights.

They objected to state incentives for forestry investments and infrastructure in their ancestral territory, which comprises the southern regions of Bío-Bío, Araucanía and Los Lagos. This sparked conflict over the ownership and control of natural resources, which are vital according to the indigenous world view.

The government’s response was to invoke harsh internal security and antiterrorism laws, created during the dictatorship. According to the Mapuche organisation Meli Wixan Mapu (from the Four Points of the Earth) in Santiago, 500 members of the Mapuche people have been prosecuted since 1990 for crimes related to territorial claims.

According to researcher Eduardo Mella, author of “Los mapuches ante la justicia. La criminalización de la protesta indígena en Chile” (roughly, The Mapuche and Justice; Criminalising Indigenous Protest in Chile), a book published in 2007, “the state has reduced the conflict to a matter of criminal justice,” and is imprisoning the Mapuche in an attempt to weaken and dismantle their movement.

Between 2003 and 2007, four international bodies have recommended that Chile review its criminal justice policy as applied to indigenous peoples, among them the U.N. special rapporteur on the situation of human rights and fundamental freedoms of indigenous people, Rodolfo Stavenhagen.

Ana Lucía Cayul, the 51-year-old mother of the Huenchullán brothers, told IPS that during a police raid she was tied to a post outside her house while the carabineros ransacked her home. “It took about an hour. I fainted and they threw water over me, they completely soaked me,” she said.

Dozens of similar complaints were documented in January 2007 by an international mission convened by the non-governmental Observatory for Indigenous Peoples’ Rights, with representatives from groups like Amnesty International, Norwegian People’s Aid and the Argentine Centre for Legal and Social Studies (CELS).

Members of Mapuche communities confirmed that the police storm violently into their homes, sometimes without a warrant. They destroy household goods and objects of cultural value, mistreat elderly people, women and children, do not hesitate to use lethal weapons, and hurl racist epithets.

The carabineros communications department declined to answer questions from IPS.

However, the carabineros as an institution have made some public gestures: they have just created a special unit to tackle the violence in Araucanía which broke out shortly before Matías Catrileo, a young university student, was shot and killed by the police on Jan. 3 when he was taking part in an invasion of private land with a group of Mapuche activists.

Catrileo’s death, and a recent 111-day hunger strike by an imprisoned woman activist for Mapuche rights have prompted public statements and demonstrations by Mapuche organisations and civil society groups.

Mapuche criminal defence lawyer Ricardo Cáceres does not speak directly of judicial persecution in Temucuicui and other communities, but he does condemn police brutality and the partiality of some prosecutors.

He told IPS that the investigating prosecutor in one of the lawsuits against Jorge Huenchullán had discovered, 15 days before the defence knew of it, that Huenchullán had never been at the site of the alleged crime, but did not immediately request a hearing to release the accused man, who was in custody pending trial.

In response to the latest wave of protests in Araucanía, the government of President Michelle Bachelet has set up an interministerial working group to evaluate public policies towards indigenous peoples. It also announced the appointment of a coordinator with wide powers to lead the working group.

The agricultural association, whose members have been most affected by the land-related violence, has asked the government to crack down on the “pro-violence groups” operating within the Mapuche people, and called on it to solve the root problem which, in its view, is the “poverty and marginalisation” of indigenous people.

“Our dream is to live in freedom, and to have our rights and our Mapuche way of life respected. We want no more persecution, no more imprisonment of our people. We want our territories back and we want to live as an autonomous nation. Marichiweu! (We will triumph ten times!),” concluded the Temucuicui werkén.