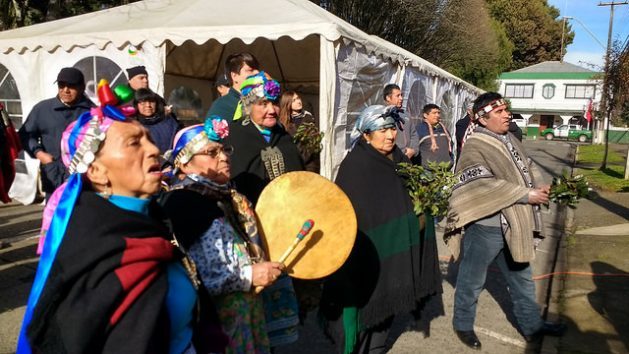 Representatives of the Mapuche, Lonko and Machi people attend the raising of the flag in the Plaza de Armas in Vilcún, 700 km south of Santiago, one of the numerous ceremonies held in Chile on Jun. 24, declared a national holiday as We Tripantu, the Mapuche new year. Credit: Mirna Concha/IPS

SANTIAGO, Jun 29 2017 (IPS) - Chilean President Michelle Bachelet’s formal apology to the country’s Mapuche Indians, for the “mistakes and atrocities” committed against them by the Chilean state, is seen by indigenous and social activists in the central region of Araucanía – the heartland of the Mapuche people – as falling short.

Native leaders in that region are calling for concrete actions and policies with regard to key questions such as their demands for self-determination, respect for their rights to their ancestral land, water use rights, and an end to violence against indigenous people.

The latest incident took place on Jun. 14, when members of the carabineros militarised police used tear gas during a raid in a school in the town of Temucuicui, which affected a number of schoolchildren and local residents.

On Jun. 27, lawyers at the government’s National Human Rights Institute filed legal action on behalf of the schoolchildren in that Mapuche town of 120 families, in the region of Araucanía.

“While the question of relations between the state and indigenous people is fundamentally political, any kind of self-determination must necessarily be accompanied by management of and access to economic resources. These are the most marginalised parts of the country, and are also paradoxically where the most profitable industries operate. That is immoral.” -- Carlos Bresciani

“This apology and acknowledgment that mistakes, and especially atrocities, have been committed is important,” said Adolfo Millabur, mayor of the town of Tirúa, the hub of the Mapuche people’s ancestral territory, with respect to the Jun. 23 request for forgiveness by the socialist president, during the launch of a Plan for Recognition and Development of Araucanía.

“I think it is positive that a president of Chile has recognised mistakes and above all atrocities committed after the Chilean state’s invasion of Mapuche territory started in 1860, in the misnamed ‘Pacification of Araucanía’,” he said.

The “Pacification of Araucanía” was a brutal military campaign by the Chilean army and settlers that ended in 1881 with the defeat of the Mapuche people, leaving tens of thousands of indigenous people dead and leading to the reduction of Mapuche territory from 10 million to just half a million hectares.

But Millabur called for “concrete measures to repair the damage caused” and said “the demilitarisation of the area would be a good gesture.”

“Children are suffering, there are victims of all kinds, Mapuche people have died, and there is no indication of how the state is going to act in the immediate future, if it is going to continue to militarise the area as it is doing now,” he added.

The Association of Municipalities with Mapuche Mayors acknowledged in a communiqué that Bachelet’s apology “is aimed at gaining a better understanding between the Mapuche people and the state.”

But it also said “this gesture must be accompanied by concrete developments such as new forms and methods of dialogue, a different approach by the police in our communities…fair trials for our brothers and sisters, and the non-application of the anti-terrorism law.”

The mayors were referring to the prosecution of Mapuche activists accused of setting trucks on fire, and the continuous raids on Mapuche homes and buildings, such as the one in the school in Temucuicui.

Mapuche activists have been arrested and prosecuted under the 1984 anti-terrorism law, put in place by the military dictatorship of Augusto Pinochet (1973-1990) and still in force, which allows witnesses to conceal their identity while testifying, and provides for longer periods of arrest on remand and extremely heavy sentences.

According to the last census, from 2012, 11 percent of Chile’s population of 17.7 million people identify themselves as indigenous.

Of the country’s 1.9 million indigenous people, 84 percent are Mapuche. Smaller native communities in Chile include the Aymara, Atacameño, Pehuenche and Pascuense people.

Catholic priest Carlos Bresciani, the head of the Jesuit mission in Tirúa, told IPS that “it is laudable that the president apologised, but asking for forgiveness is not enough if it is not accompanied by fair reparations.” 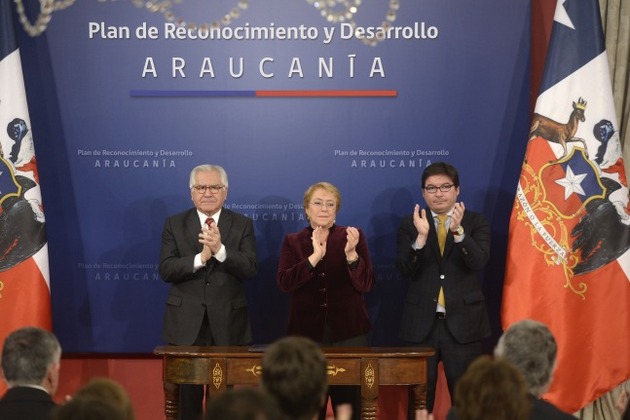 During the launch of a new plan for the region of Araucania, Chilean President Michelle Bachelet apologised to the Mapuche people on Jun. 23 in the name of the Chilean state, for the “mistakes and atrocities” committed against them. Credit: Chilean Presidency

Bresciani also believes greater dialogue with the Mapuche people will be possible “if more political questions such as self-determination or autonomy are put on the table, and if the dialogue includes all sectors, no matter how radical they might be.”

The priest was referring to the low level of representation of Mapuche leaders on the Araucania Presidential Advisory Commission, appointed by Bachelet in January 2015, which wrapped up its work in January with a package of proposals that included a suggested apology by the president.

“If she wants to talk about collective rights, (Bachelet) should be reminded of the treaties signed by Chile, such as convention 169 of the ILO (International Labour Organisation) and the United Nations Declaration on the rights of indigenous people which, among other things, declares their right to self-determination or autonomy, terms that are absent from her plan for Araucanía,” Bresciani said.

Jorge Pinto, a history professor at the Universidad de La Frontera, a university in Temuco, the capital of Araucanía, who sat on the commission set up by Bachelet, told IPS that the government’s new plan for that region is “sound and complete” and interpreted the apology as a gesture aimed at reactivating dialogue.

But the academic urged “talks with the different actors from the region who have been left out so far.”

He also said “it is not enough to guarantee rights to land ownership and water use. Control over their land by indigenous people and autonomy in managing resources are also necessary.”

“No one is proposing that the forestry and hydroelectric companies pull out of the region,” said Pinto. “What we are saying is that agreements must be reached with the local communities affected by hydropower dams, logging companies and mines, and not with the authorities.”

“The proposals talk about economic or development policies,” the priest said. “While the question of relations between the state and indigenous people is fundamentally political, any kind of self-determination must necessarily be accompanied by management of and access to economic resources. These are the most marginalised parts of the country, and are also paradoxically where the most profitable industries operate. That is immoral.”

According to Bresciani, the extreme poverty in Araucanía “is the result of a systematic and planned policy to appropriate resources, under an unsustainable extractivist model. The measures proposed are not aimed at modifying these structural policies, but at continuing to offer money to turn the communities into clients of the existing system.”

Social activists and indigenous leaders admit the value of some of the initiatives included in Bachelet’s plans, such as the official declaration of Jun. 24 – We Xipantu, the Mapuche new year – as a national holiday, and a stronger effort to teach Mapuzungún, the Mapuche language, in schools in their communities.

They also applaud the proposal to explicitly recognise native communities in the projected new constitution, which would replace the current one, which dates back to 1980 and is a legacy of the Pinochet dictatorship which successive democratic governments have failed to replace, implementing limited reforms instead.

Activists say however, that the measures taken so far have been inadequate, and point out that Bachelet’s term ends in just nine months.

That will make it difficult to bring about real actions in areas such as land ownership and water use rights, which are key to a regional economy dominated by the interests of large logging, hydropower and mining companies.

Former right-wing president Sebastián Piñera (2010-2014), who is the favorite in the opinion polls for the November elections as the likely candidate for the Chile Vamos alliance, supports Bachelet’s apology to the Mapuche people.

“I agree with the apology because I believe that throughout history, many injustices have been committed against the Mapuche people,” said Piñera. He added, however, that “the apology is just a gesture, and does not solve any problem.”