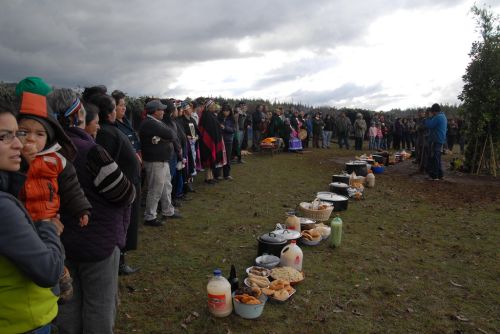 Members of the Mapuche people during one of their demonstrations defending their rights, in particular their claim to theirancestral lands, in the region of La Araucanía, Chile. Credit: Fernando Fiedler/IPS

SANTIAGO, Jan 26 2017 (IPS) - The lands where the Mapuche indigenous people live in southern Chile are caught up in a spiral of violence, which a presidential commission is setting out to stop with 50 proposals, such as the constitutional recognition of indigenous people and their representation in parliament, in a first shift in the government´s treatment of native peoples.

President Michelle Bachelet received on Monday Jan. 23 the recommendations from the Presidential Advisory Commission to address the conflict in the La Araucanía region, home to most of the country’s Mapuche people, who make up nearly five percent of Chile’s population of just under 18 million people.

The Mapuche leaders and their supporters accuse the police deployed to the region of being “agitators” and of militarising the area, while logging companies and landowners call the local indigenous people “terrorists” and demand a heavy-handed approach towards them.

Among the proposals of the Commission, created in July 2016, are the creation of a national registry of victims of violence and compensation for them, support for the economic development of the Mapuche people – the largest native group in Chile – and solutions to return native land to the Mapuche people, in land disputes.

“A historical debt is recognised with respect to the Mapuche people, but there is no analysis of what this debt consists of, let alone the deep current and historical causes of this now existing violence in La Araucanía” -- Jorge Aylwin
In addition, the Commission recommended that the president “publicly apologise, in representation of the Chilean government, for the consequences this conflict has had for the Mapuche people and any other victims of the violence in the region.”

The package of proposed measures comes in the wake of a dozen arson attacks early this year in rural areas of La Araucanía against logging company trucks and storehouses by unidentified perpetrators, who in some cases left pamphlets with demands by the Mapuche movement.

The attacks reached their peak around Jan. 3-4, dates marked in the indigenous struggle for their rights, in memory of Matías Catrileo (2008), a young Mapuche victim of a gunshot from the police, and of the elderly Luchsinger Mackay couple (2013), who died in their house when it was burnt down by unidentified assailants.

Chile´s manufacturers´ association, SOFOFA, to which the two main logging companies that extract timber in La Araucanía belong, said the region “is no longer governed by the rule of law” and that “the incapacity of the powers of government to respond and fulfill their functions of law enforcement and punishment of crimes is evident.”

“It is not an absence of the rule of law, it is a lack of respect and infringement of the human rights of these people. That is a serious thing. It is the government that undermines their rights. Talking of an absence of the rule of law is just an excuse to put the military in the territory,” Carlos Bresciani, a Jesuit priest who lives in the Tirúa village, in the area of conflict, told IPS.

“Here everything works fine, people live normally, they plant, they harvest, they run their errands, they work. The people who talk about an absence of the rule of law have never lived here. We are not at war. There are no bullets whizzing by or bombs destroying cities,” he said by telephone. 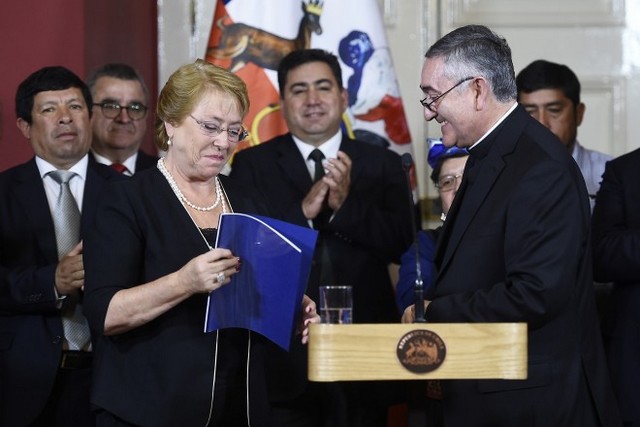 Chilean President Michelle Bachelet receives the final report to address the urgent problems that face the Mapuche people, drafted by the Presidential Advisory Commission for La Araucanía, in a ceremony on Jan. 23, at the La Moneda Palace. Credit: Presidency of Chile

Upon presenting the conclusions of the 20-member Commission, their leader, Catholic Bishop Héctor Vargas, said La Araucanía is a “wounded and fragmented region” that is facing a “gradual intensification of its problems.”

These problems, explained the bishop of Temuco, capital of La Araucanía, “involve a historical debt to the Mapuche people, the dramatic situation of the victims of rural violence, and the very worrying indicators which rank us as the poorest region in the country.”

In the region, poverty by income fell from 27.9 to 23.6 per cent, but it is far above the national average of 11.7 per cent, according to the latest national survey.

Besides, the so-called multidimensional poverty affects more than 30 per cent of the people in the region, compared to a national average of 19.11 per cent.

In fact, in La Araucanía are five of the seven municipalities with the highest multidimensional poverty rates in Chile, and the average regional income is of 382 dollars a month, far below the national average of 562 dollars.

“The government has neglected this land and its people,” said Vargas, who added that these issues are difficult to address because “they generate contradictory positions and views and deep feelings of grief, impotence and resentment.”

The bishop called for an end to the violence “before hatred puts an end to us… If we want to disarm our hands, we have to first disarm our hearts.”

For José Aylwin, head of the non-governmental Citizen Observatory, the proposals of the Commission lack “a rights-based approach,” for example with respect to the occupied ancestral lands.

“A historical debt is recognised with respect to the Mapuche people, but there is no analysis of what this debt consists of, let alone the deep current and historical causes of this now existing violence in La Araucanía,” he told IPS.

”There is no reference to the violence carried out by the police against the Mapuche people or the promotion of the forestry industry which has resulted in the consolidation of a 1.5-million-hectare forest property to the south of the Bío Bío river,” said Aylwin.

The Commission´s proposal, he said, “acknowledges the existing political exclusion and proposes special forms of representation for indigenous people, but does not set forth other options such as autonomy and self-determination in areas of high indigenous density.”

“The bias towards productive development is clear, it refers to new productive activities, such as fruit orchards, but it includes wood pulp,” which is of interest to forestry companies, said the head of the Observatory.

Interior Minister Mario Fernández admitted during a parliamentary inquiry on Monday Jan. 23 that in La Araucanía “there is terrorism, but there is also an atmosphere of violence that has other roots.”

“We will not solve with repression or simple solutions a problem that has been going on for centuries. Rule of law doesn’t mean a right to repress, it means respecting the rights of people,” he said.

Bresciani stressed that the use of the word violence in La Araucanía “is tendentious and seeks to create a strained and clearly discriminatory climate around the social demands of the Mapuche people.”

“The term violence has been co-opted by right-wing business interests who want to create that scenario in order to justify further judicialisation and militarisation of the territory…therefore, measures of repression,” he said.

According to the priest, the violence in La Araucanía “is exercises by the political and extractionist neo-liberal economic model” and “there is an older cause which has to do with the usurpation of the lands that the Mapuche people used to have, which reduced them to poverty and humiliation.”

Bresciani considers that a solution will be found “when this conflict is seen as a political conflict, and not judicial or having to do with the police or with poverty. And from there, measures have to be taken to ensure the recognition of native peoples and return to them their lands.”

Isolde Reuque Paillalef, one of the three women on the Commission and the only indigenous social leader, said “there is a new and knowledgeable vision,” after listening to the victims of violence on both sides.

But “it will also depend on who is supporting the most violent groups, because the violence is not just violence… there must be other interests involved,” she told IPS.