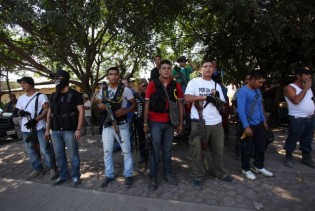 By Daniela Pastrana
“In the long term, what benefit will regulation of the autodefensas [self-defence groups] bring us? Do you think I have an aptitude or professional vocation for police work?” asked Juan Carlos Trujillo, a peace activist in the Mexican state of Michoacán.

By Cam McGrath
As Egyptians debate how deeply Sharia should influence the new constitution, and in the face of clashes that left five dead on Wednesday, some extremists have taken to the streets to enforce their own interpretation of "God’s law". In recent months, these self-appointed guardians of public probity have accosted Muslims and minority Christians they accuse of violating the provisions of Islamic law.
ADVERTISEMENT ADVERTISEMENT