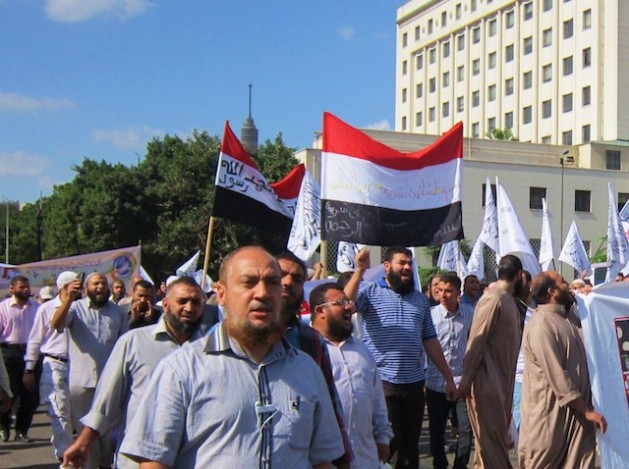 Salafi groups are calling for Egypt to adopt Sharia. Some appear to have taken to the streets to punish perceived transgressions. Credit: Cam McGrath/IPS.

CAIRO, Dec 6 2012 (IPS) - As Egyptians debate how deeply Sharia should influence the new constitution, and in the face of clashes that left five dead on Wednesday, some extremists have taken to the streets to enforce their own interpretation of “God’s law”. In recent months, these self-appointed guardians of public probity have accosted Muslims and minority Christians they accuse of violating the provisions of Islamic law.

Ishaq Ibrahim, a researcher at the Egyptian Initiative for Personal Rights (EIPR), says reports of incidents began after the 2011 uprising that toppled dictator Hosni Mubarak. Witnesses have reported seeing “bearded zealots” threaten women they deem dressed immodestly, break up parties playing “un-Islamic” music, vandalise shops selling alcohol, and in one case, chop off the ear of a man accused of abetting immorality.

Ibrahim says evidence is circumstantial, as only a few of the perpetrators have been caught, but the attacks appear to be the work of ultraconservative Salafi Muslims.

Salafis follow a puritanical school of Islam, aspiring to emulate the lifestyle of Prophet Muhammad and his companions, and putting conspicuous emphasis on beards and veils. Salafi political parties won nearly a quarter of the seats in the now dissolved lower house of parliament and have vigorously demanded Sharia as the sole source of legislation in Egypt.

While homegrown Salafi groups once carried out a bloody insurgency aimed at carving out an Islamic caliphate, their leaders have since renounced violence and pledged peaceful dialogue. Prominent Salafis, however, have threatened violence against “idols and blasphemers” – one recently vowing to “cut off the tongue” of anyone who insults Sharia or Islam.

Or cut off their hair perhaps?

Mirette Michail was standing with her sister in downtown Cairo when six women wearing niqab (the full Islamic veil) attacked her, beating her and attempting to set her hair on fire – presumably as punishment for not veiling. The women disappeared into the crowd when two male passersby intervened, she reported.

It was the third tonsorial assault in less than a month. Earlier, two women in niqab cut the hair of a Christian woman riding the subway and pushed her off the train, breaking her arm. A 13-year-old Christian girl also had her hair cut by a fully veiled woman while on the subway.

Such incidents are unusual in Cairo. The capital still retains its relatively cosmopolitan atmosphere, with young couples holding hands in public, tourists piling off buses in shorts and t-shirts, and many upscale establishments serving alcohol.

But in provincial cities and rural areas, long governed by a culture of conservative Islam, activists have reported an alarming increase in cases of moral vigilantism. Extremists appear to be organising small groups to patrol neighbourhoods and enforce their own interpretation of Sharia – by brute force if necessary.

Amal Abdel Hadi, head of the Cairo-based New Women Foundation, says the absence of an effective police force since last year’s uprising and the expectation that Egypt’s new constitution will mandate stronger application of Islamic law has given these groups a sense of legitimacy.

“When you have in your constitution that the state should ‘safeguard ethics and public morality’, it’s a green light for these groups to operate,” Abdel Hadi told IPS. “You’re constitutionalising the role of the community in defending traditions using vague and rhetorical phrasing that allows for extreme interpretations.”

Last January, a shadowy group claiming affiliation to the Salafi Calling announced on Facebook that it had established the Committee for the Promotion of Virtue and Prevention of Vice, an Islamic morality police modeled on Saudi Arabia’s mutaween.

In Saudi Arabia, mutaween agents and volunteers patrol the streets, enforcing strict separation of the sexes, conservative dress codes, observance of Muslim prayers, and other behaviour they consider mandated by Sharia. Until 2007, these government-sanctioned enforcers of Islamic law carried rattan canes to mete out corporal punishment.

While there is no proof that the Egyptian group ever transformed its online presence into a physical force, its unveiling coincided with a series of incidents in the northern delta provinces. The Arabic press reported that groups of bearded men armed with rattan canes raided shops, threatening to flog shop owners caught selling “indecent” clothing, barbers found shaving men’s beards, or any merchant displaying Christian religious books or icons.

The attacks culminated in the murder of Ahmed Hussein Eid, a university student stabbed to death during a run-in with some roving enforcers last June. According to police reports, three Salafi men approached Eid and his fiancee as they were out walking in Suez’s port district. The men castigated the couple for standing too close, and when Eid rebuked them, one of the men pulled out a knife and fatally stabbed him.

Al-Azhar, the highest authority in Sunni Islam, has issued statements condemning reports of individual efforts to enforce Sharia. As has the ruling Muslim Brotherhood.

But Salafi leaders have been equivocal, denying any affiliation to moral vigilante groups while defending the concept – provided it is through “peaceful intervention”.

“The idea of having such a committee is legitimate and in accordance with the Quran,” Islamist lawyer Montasser El-Zayat told one local media outlet. “Such a committee should promote virtue with virtue, and prevent vice with virtue as well. And, of course, it would be better if (it were) run by the government and not by an independent group.”

Police, criticised for mothballing reports of vigilante incidents, responded to a public outcry following the fatal stabbing in Suez. The three Salafi assailants were apprehended and each sentenced to 15 years in prison.

EIPR’s Ibrahim says moral vigilantes have kept a low profile since the sentencing. But this may simply be the calm before the storm.

“Islamists (control the political agenda) so it’s not in their interest to create problems for the time being,” he says. “They want to focus on the constitution first, then comes the application of Sharia.” [END]