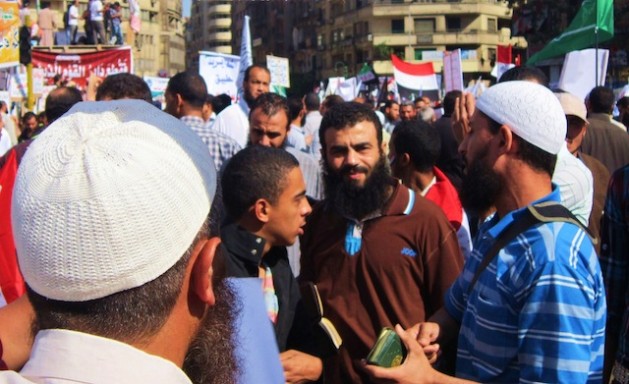 A Salafi rally in Cairo. Islamist leaders are pushing to reduce Egypt's legal marriage age for girls, some arguing for as low as nine. Credit: Cam McGrath/IPS.

CAIRO, Nov 14 2012 (IPS) - An ultraconservative Salafi cleric recently sparked outrage among Egypt’s liberal circles when he attempted to justify his opposition to a proposed constitutional article that would outlaw the trafficking of women for sex.

Speaking on privately-owned Al-Nas satellite channel, Sheikh Mohamed Saad El-Azhary said he feared the proposed article could conflict with the local practice of child marriage. He explained that in Egypt, particularly in rural areas, there is a culture of marrying off girls as soon as they hit puberty.

“The important thing is that the girl is ready and can tolerate marriage,” El-Azhary declared.

He went on to protest proposed laws protecting women from violence, warning that if allowed to pass husbands could be prosecuted for beating their child brides or forcing themselves upon them.

“If you have intercourse with your wife against her will, she will be able to file a complaint against you,” he said. “That’s where things are headed.”

Followers of the Salafi trend believe in a literal reading of the Quran and hadith (traditions of Prophet Muhammad) and aspire to emulate the lifestyle of the Prophet and his companions. Their puritanical approach to Islam has put them at odds with secular Muslims and minority groups, who denounce their intolerant worldview.

For Salafis, the fundamental justification for child marriage is passages in the hadith that state Prophet Muhammad married his third wife when she was six years old, and consummated the marriage after her first menses at nine.

Sheikh Yasser Borhamy, spokesman for the Salafi Dawah, outlined his interpretation of the Quranic texts during an interview with TV presenter Wael El-Ebrashy. He argued that Egypt’s marriage laws contradict the provisions of Sharia (Islamic law), as girls should be married off once they reach puberty, or before “if she can”.

“If Islam allowed it during the Prophet’s time, it will be permissible until the End of Days,” Borhamy asserted.

While Salafis represent just a small but vocal minority of Egyptians, the recent election of an Islamist parliament and president has extended their political clout.

But what deeply concerns child rights advocates is that El-Azhary and Borhamy are members of the committee tasked with drafting Egypt’s new constitution. And they are not alone. Other members of the Islamist-stacked panel are known to share their views on child marriage and may be attempting to enshrine them in the constitution.

“We fought for years to raise the minimum age of marriage for girls (from 16) to 18, and now the Islamists want to lower it,” says women’s rights activist Azza Kamel. “There are Salafis arguing it should be as low as nine.”
Some battles may have already been lost.

When a copy of the constitution’s first draft circulated last month, rights advocates were shocked to find that a proposed clause banning the trafficking of women had been omitted. Salafi members of the drafting committee had argued to have it removed on the grounds that human trafficking “does not exist in Egypt” and its mere mention “tarnishes Egypt’s image.”

International agencies strongly disagree. According to a 2010 report by the U.S. State Department, human trafficking exists at many levels in Egypt. The country is a transit point and destination for trafficked African and Asian women and children, who are subjected to forced labour and prostitution.

It is also a source of trafficked women, including young girls exploited under the guise of marriage.

Local NGO Memphis Foundation for Development says the phenomenon of child marriage is widespread in Egypt, particularly in rural areas where parents often marry off their daughters early to escape grinding poverty. Research conducted in 2008 found that nearly a quarter of all marriages involved girls under 16.

Afaf Marei, director of the Egyptian Association for Community Participation Enhancement (EACPE), says many of these underage girls are sold by their parents to wealthy Gulf Arabs who come to Egypt in search of “summer brides”.

The marriages are arranged by lawyers who act as brokers, and may last from hours to months according to the “dowry” paid to the parents. Often the transaction is made without the girl’s knowledge or consent.

“These marriages are a form of trafficking women (under the pretence of) Islamic law,” says Marei.

The Muslim Brotherhood, the conservative Islamic group that dominated this year’s parliamentary and presidential polls, has kept a low profile in the discourse on child marriage. While some reformists in the group reject the practice, its hardline leaders were the principal opponents of the 2008 law that raised the minimum marriage age of girls to 18.

Now, as pressure mounts on the constitutional drafting body to have the document ready by a Dec. 12 deadline, the Brotherhood’s weight could prove decisive both on the panel and at the polls. If the constitution goes to a referendum without a clause explicitly banning the trafficking of women, it is likely to pass given the Brotherhood’s ability to rally public support, say liberal activists.

“We’re fighting to win, but rationally I don’t think we can,” concedes Amal Abdel Hadi, head of the New Women Foundation. “This is just one battle and we’re fighting the Islamists on even greater issues such as (to guarantee) the equality of citizenship.” (END)