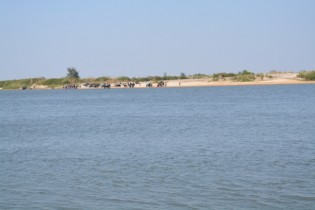 Opening of Kariba Dam Floodgates Not Welcomed by All

By Garikai Chaunza
Almost every rainy season the floodgates of Kariba Dam have to be opened to relieve pressure on the dam wall. But despite warnings not to live or farm on the river banks of the Zambezi River downstream of the dam, some people do so anyway and end up losing their crops.
ADVERTISEMENT ADVERTISEMENT