NEW YORK, Jul 9 2007 (IPS) - One person may not be able to save the world, but former U.S. Vice President Al Gore won’t give up his quest to do so without a fight – make that a green revolution. 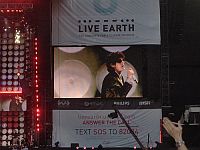 Hailed by organisers as the largest concert ever, the event stemmed from Gore’s famed slideshow detailing the dangers and realities of “an inconvenient truth” otherwise known as global warming.

Precise figures regarding the concert’s overall reach will take weeks to tabulate, according to Robb, but MSN has already reported that, with well over 10 million viewers in cyberspace tuning in for one of the 21 different languages broadcasted, Live Earth has become the most simultaneously viewed online concert ever.

With Live Earth founder and producer Kevin Wall working behind the scenes, the concert’s success should come as no surprise to those familiar with his previous mega endeavours, which included Live 8 in 2005 and Live Aid in 1985.

Performers around the world included Madonna, The Police, Shakira, Bon Jovi and 2007 Academy Award winning songstress Melissa Etheridge who wrote and performed “I Need to Wake Up” for “An Inconvenient Truth.”

Nunatak, a band of scientists from the British Antarctic Survey, even performed to a handful of employees on the frozen tundra.

“We really wanted to convey the global nature of the crisis,” explained Robb referring to Nunatak’s performance. “Not only do our actions here at home affect Antarctica, but the melting ice and climate shifts there will have profound effects thousands of miles away.”

Awareness about the event was recently bolstered by several Live Earth partnerships ranging in scope from conservation organisations like the World Wildlife Fund to corporate sponsors including Philips Electronics.

“Live Earth was set up to make people more aware of energy solutions,” Harry Verhaar, senior director for Energy and Climate Change at Philips, told IPS. “We want to improve people’s lives and to show them how simple it is to make the switch to more energy efficient solutions.”

Organisers at Live Earth did just that, incorporating as many innovative energy-saving devices and recyclable materials into the concert’s framework as feasibly possible.

Despite the successful implementation of these environmental considerations to cut down on waste and consumption, critics of Live Earth, including Roger Daltrey of the Who, have ostracised the event for using excess energy to promote conservation.

“We deeply respect Al Gore and Kevin Wall and wanted very badly to roll up our sleeves, get to work and make a difference,” Brand Neutral founder Tom Feegel told IPS.

As part of the Live Earth Call to Action, a series of commitments that concert organisers and the Alliance for Climate Protection are pushing on the public, the seven-point pledge was repeated several times by celebrities and activists at every major venue around the world.

In New Jersey, Al Gore urged concert goers to sign the pledge, committing themselves to becoming carbon neutral, increasing the energy efficiency of their homes and fighting for a moratorium on new coal-burning facilities that do not engage in carbon sequestration, among other environmentally progressive actions.

“The massive outpouring from the seven-point pledge will certainly be conveyed to leaders all over the world,” Robb told IPS.

Although Saturday went smoothly for concertgoers and organisers, the weeks and months leading up to Live Earth were marked by scepticism and a great deal of the unknown at several venues.

A scheduled concert in Istanbul was recently cancelled due to general lack of interest, and one at Copacabana Beach in Rio de Janeiro nearly suffered a similar fate last week due to security concerns before a last-minute court order saved the free venue that would go on to draw the largest crowd of all, estimated in the hundreds of thousands.

All proceeds from ticket sales will go toward the Alliance for Climate Protection, but organisers prefer not to think of the event as a benefit concert.

“We want to stress that the fund-raising aspect of Live Earth is just the cherry on top,” Robb told IPS. “What this is really about is engaging the global audience. This is about getting people to take action and to join the movement.”

Millions of people joined the movement in their own ways by sponsoring or attending one of the more than 10,000 Friends of Live Earth events in 130 countries on Saturday.

Friends of Live Earth is an official Live Earth programme designed to build a worldwide community-level movement to combat the climate crisis. Robb told IPS that events ranged in scope from watching the concert at home with friends, to parties and smaller concerts attracting thousands of people.

Tom Lalley, director of media relations at the World Wildlife Fund, referred to his organisation’s mascot when he told IPS, “The panda doesn’t back down from a party.”

“A lot of times, environmental issues are wrapped in gloom and doom. This is a way for us to come together, have a big party, enjoy ourselves, and hopefully something will come out of it in terms of substance,” he added.