UNITED NATIONS, Jul 6 2007 (IPS) - A report by the U.N. Environment Programme assessing Sudan’s environmental degradation, scheduled for a national launch in Khartoum on Jul. 8, has spurred debate for linking decades of conflict in the war-torn region to broader problems like climate change. 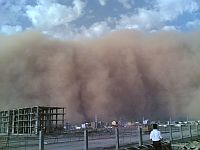 A sandstorm bears down on Khartoum in May 2006. Credit: UNOPS Sudan

“Competition over oil and gas reserves, Nile waters and timber, as well as land use issues related to agricultural land, are important causative factors in the instigation and perpetuation of conflict in Sudan,” the report says.

“Long-term peace in [Northern Darfur] will not be possible unless these underlying and closely linked environmental and livelihood issues are resolved.”

Since the conflict in Sudan’s Darfur region dramatically escalated in February 2003, when members of the region’s ethnic African tribes took up arms against what they saw as decades of neglect and discrimination by the Arab-dominated government in Khartoum, the Darfurian people have been subject to government-sponsored displacement, rape and murder.

The violence orchestrated by the Sudanese government and perpetrated by its Janjaweed militias has claimed at least 400,000 lives, displaced 2.5 million people and left more than 3.5 million men, women and children struggling to survive amid violence and starvation, according to the U.N.

“There have been some people who thought that the report was simplistic in terms of linking climate change with conflict,” Nick Nuttall, spokesperson for the executive director of the U.N. Environment Programme (UNEP), told IPS. “Others say that it is absolutely necessary and a window onto a wider world.”

The report says that flooding, deforestation, overgrazing due to explosive livestock growth and a marked decline in rainfall as a result of regional climate change have been “a significant stress factor” in Sudan’s largely pastoral society.

Amnesty International’s representative at the U.N., Renzo Pomi, told IPS, “It’s hard to talk about building a country like Sudan with conflicts going on. My impression is that the process will be very slow moving.”

Two recommendations in the report call for the Government of National Unity and the Government of Southern Sudan to “increase investment in environmental health-related infrastructure and services.” The report goes on to state, “the investment required to attain even a basic level of service is anticipated to be in excess of USD 1 billion over a period of more than a decade” for each of the south and the north.

This additional estimate upwards of 2 billion dollars from two recommendations alone could effectively render the 120 million dollars and anticipated one to five-year corrective action timeframe cited in the assessment obsolete.

Andrew Morton, project manager of the report, explained to IPS his agency’s decision to not include these recommendations, among others, in the 120-million-dollar estimate, stating, “I don’t consider these to be environmental expenditures. They are what is needed to build the country.”

Several other UNEP recommendations and stipulations are never fully developed or addressed in the report. One recommendation calling for Sudan to pursue expensive carbon sequestration technologies is estimated at just 300,000 dollars, and one to shut down Sudan’s illegal ivory carving and trading industry is anticipated to be cost-free.

Both recommendations account for introduction alone, but do not include implementation, enforcement or an outlook toward sustainable development.

The assessment notes that, “Many governance recommendations will result in laws, policies and plans that will have a major economic impact. This follow-on cost is not included in the estimate.”

Reforming an entire country will likely not be an inexpensive or quick process. “The report is designed to be alive and relevant for many years,” Morton told IPS.

UNEP plans to maintain a central role in establishing the report’s recommendations through at least 2009, if adequate funds are available. “We are close to securing significant funding,” Morton told IPS, but he would not name potential bilateral sources.

Some outside experts worry that the deteriorating political situation may not allow for long-term sustainable development at this point.

“The great fear that I’m seeing is of a renewed war in the south,” Sudan expert Eric Reeves told IPS. “There are good reasons to believe that war will resume, and if it does, it will be unfathomably destructive.”

Sam Bell, advocacy director for the Genocide Intervention Network, told IPS, “We’re advocating for a renewed peace process that brings together all of the disparate rebel factions. We can’t solve this without a real peace process.”

Such a process would likely rely on strengthened relations between the fledgling Government of National Unity and the Government of Southern Sudan.

The report states that the “wholehearted support” of more than 10 U.N. agencies, the Government of National Unity and the Government of Southern Sudan is “required for the implementation of many recommendations.”

“You’ll unlikely get 100 percent buy in right away,” Morton said. “The whole idea is to show, through small successes, the benefits [of these recommendations].”

Benefits could be limited if international assistance, cited in the report as a force that “should play a strong role in the fields of climate change and disaster reduction,” are as difficult to come by as some predict.

“The priority [in Sudan] is humanitarian assistance and stopping the conflict,” Pomi told IPS. “I don’t know how willing the donor community will be to give much money to Sudan to implement a long-term environmental project.”

“You can’t begin to address economic issues unless you look first at the political regime,” Reeves warned IPS.

Fellow Sudan expert Alex De Waal expressed similar views in a column for the Social Science Research Council stating, “The most important culprit for violence in Darfur is government.”

Both Reeves and De Waal have criticised recent U.N. actions that link environmental degradation to past and present African conflicts, most notably Secretary-General Ban Ki-moon’s June op-ed in The Washington Post in which he stated, “Amid the diverse social and political causes, the Darfur conflict began as an ecological crisis, arising at least in part from climate change.”

“Every Sudan expert has nothing but contempt for that piece and for Ban Ki-moon’s comments,” Reeves told IPS. “There is absolutely no indication in the op-ed that he begins to understand that political realities are essential.”