HAVANA, Aug 1 2007 (IPS) - Every morning Mario Véliz makes his way through the streets of Pogolotti, a low-income neighbourhood in the Cuban capital, to the milk shop. Those who only know him because he works there are unaware that this thin, wiry man with a face seamed with age is the life and soul of local reforestation. 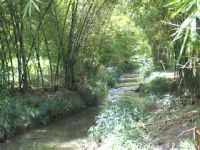 Véliz, whose friends call him “environment boy,” owns a ramshackle house at the edge of the Isla de Polvo shanty town. It was in his yard that a group was formed, which is now involved not only in forest restoration but also in managing the water in a local stream, treating solid waste and educating residents on environmental questions.

“The first thing we did was to recover the sacred forest of Pogolotti, which used to be a garbage dump,” Véliz said. Now, after 10 years of restoration efforts, it is an extensive woodland area which is useful as a barrier against dust from a nearby lime pit, and serves as a park for the barrio (neighbourhood).

Every year the community performs religious ceremonies under the still young trees, to commemorate the rebirth of the forest on the old dump site. Offerings are made to the ceiba or God tree, and there is folk dancing. Animism with Afro-Cuban roots is the main belief system among the residents of the predominantly black neighbourhood of Pogolotti.

The reforestation project was an initiative of the community itself, and was supported from the outset by local authorities and the Metropolitan Park of Havana, the institution in charge of environmental management of part of the city’s “green belt”.

The Metropolitan Park covers an area of seven square kilometres on either side of the Almendares river, the largest in Havana, which winds through densely populated municipalities with extensive deforestation, before flowing into the Florida straits.

The Almendares river basin is one of eight that were given top priority in Cuba after the National Council for Hydrographic Basins was created in 1997. Its main problem is pollution from waste water, due to poor sewerage infrastructure and waste water treatment in this city of 2.2 million people.

One of the Almendares’ tributaries is the Santoyo river which runs to the south of Pogolotti. Its banks, once bare because of uncontrolled tree-cutting, are now covered by robust bamboo canes, planted by Véliz’s group.

“I proposed planting the bamboo, because its roots filter out impurities,” said the 56-year-old Véliz, who has never taken technical or higher education forestry courses, but has the experience that comes from living close to the land and loving it like a member of his own family.

First, Véliz convinced those who farm small garden plots along the river banks to join in the planting. Later, with advice from the Metropolitan Park and funding from a Spanish non-governmental organisation, he achieved reforestation of the stretch of the Santoyo bordering the barrio.

Bamboo roots prevent soil erosion along the banks of rivers, while their shade reduces evaporation. Bamboo leaves falling to the ground absorb rainwater like a sponge, thus decreasing the risk of flooding.

The Ministry of Science, Technology and the Environment (CITMA), in its environmental strategy for the period up to 2010, intends to identify all sources of organic contaminants and cut pollution by at least one percent a year.

In addition, the authorities plan to increase the forested area of the country by 2015, from 25 percent to over 29 percent of its total land area.

The Pogolotti neighbourhood began to emerge in 1911. Today it has a population of more than 26,800 residents, distributed over an area of little more than five square kilometres, including three shanty towns mainly inhabited by people from other provinces.

As well as a shortage of decent housing, a common problem everywhere in this Caribbean island nation, the neighbourhood faces longstanding difficulties in solid waste disposal, and a number of garbage dumps have spontaneously sprung up.

The problem of waste disposal is a constant concern to the Workshop for Integral Transformation of the Barrio, a community organisation that has worked since 1990 to improve material, social and cultural conditions with the participation of the community and the cooperation of local institutions.

“The environmental group talks to the municipal services when there are delays in collecting garbage,” said Véliz. In addition, some 170 families in the area are involved in a recycling project that, it is hoped, will raise consciousness about an issue that the government seems unlikely to solve in the short term.

According to the First Compendium of Environmental Statistics, published by the National Statistics Office in April 2006, Cuba generates about 24 million cubic metres of urban solid waste every year, 40 percent of which is produced by Havana.

The CITMA environmental strategy aims for 70 percent of solid waste from domestic, hospital and industrial sources to be properly collected, treated and disposed of nationwide within the next three years.

Véliz took a course on permaculture this year, a technique for recycling domestic waste and using it to fertilise tiny pieces of earth, such as terraces or balconies. He said he would like to spread this knowledge, too, throughout the modest barrio where his environmentalist vocation comes to life.

“When everyone does just a little, they make the world beautiful,” said Véliz, who is disappointed when people only recognise him as the milk vendor. “I live and die for the sacred forest, for my environment, and in spite of our poverty we are working for these things,” he said.