LIMA, Jan 8 2008 (IPS) - Legal investigations in Italy and declassified U.S. government documents prove that Peru was also involved in Operation Condor, created by the military regimes ruling South America in the 1970s and 1980s to cooperate in the elimination of dissidents. 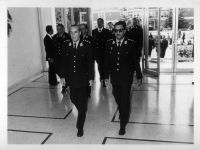 Declassified U.S. State Department documents confirm that former Peruvian dictator Francisco Morales Bermúdez (1975-1980) approved the capture in Lima of four alleged members of the Montoneros, the armed wing of the Peronist movement in Argentina, in an operation carried out jointly by members of the Batallón 601, a special Argentine army intelligence unit, and Peru’s Army Intelligence Service (SIE).

In late December, Italian Judge Luisianna Figliolia in Rome issued arrest warrants for 140 people from Argentina, Bolivia, Brazil, Paraguay, Peru and Uruguay, to try them in connection with the forced disappearance of 25 Italian citizens, carried out within the framework of Operation Condor. One of those under investigation is Morales Bermúdez.

"I assume my political responsibility" for that detention, Morales Bermúdez said when he heard the news. But he denied that Peru formed part of Operation Condor, a covert strategy that entailed information sharing and joint operations between the intelligence services of Argentina, Bolivia, Brazil, Chile, Paraguay and Uruguay to kidnap, murder and &#39&#39disappear&#39&#39 leftists and other alleged "subversives."

The sentences of up to 25 years handed down on Dec. 18 by a court in Argentina against eight senior Batallón 601 officers were partly based on secret U.S. State Department files that were declassified by the Washington-based non-governmental National Security Archive.

Batallón 601 agents travelled to Lima in June 1980, one month before Morales Bermúdez handed over power to elected president Fernando Belaúnde.

In coordination with Peruvian agents, the members of the Argentine intelligence unit were tracking down a group of alleged Montoneros guerrillas who were reportedly planning an important meeting in Lima.

Award-winning U.S. investigative journalist John Dinges, author of the 2004 book "The Condor Years: How Pinochet and His Allies Brought Terrorism to Three Continents", brought to light another document providing information on Peru’s participation.

"The Peruvians definitely formed part of Operation Condor. The military deny it, but according to the evidence I found, they did participate," Dinges told this IPS correspondent earlier.

According to Morales Bermúdez and his former prime minister Pedro Richter, who is also wanted by Judge Figliolia, Peru could not have formed part of that plan because during that period there was great tension with the government of Chile, the country that headed Operation Condor.

But "that is not a valid argument because there were also problems between Argentina and Chile, and between Bolivia and Paraguay, and they conducted joint operations nonetheless," said Dinges.

In the journalist’s view, "Peru’s participation makes sense because Morales Bermúdez, after abandoning the reformist policies of left-leaning General Juan Velasco Alvarado (1968-1975), wanted a more traditional military government, which meant the reestablishment of ties with other military regimes, like those of Chile and Argentina. And that is what happened."

The Batallón 601 operation in Lima was carried out Jun. 9-15, 1980. It was made possible by the capture in Argentina of Federico Frías, who, after suffering extensive torture, agreed to cooperate with Argentine intelligence agents.

They transferred him to Lima after he revealed that a meeting of high-ranking Montoneros, headed by guerrilla leader Roberto Perdía, would be held in that city.

As a result of the operation, Noemí Gianetti de Molfino, a member of the Argentine human rights group Mothers of the Plaza de Mayo, María Inés Raverta and Julio César Ramírez were seized in Lima.

Noemí Gianetti’s daughter Marcela Molfino and her son-in-law Guillermo Amarilla had been forcibly disappeared in 1979.

Gianetti de Molfino, Raverta, Ramírez and Frías were then handed over to the Bolivian military and were never again seen alive. Gianetti de Molfino’s body was found shortly afterwards in a hotel in Madrid, on Jul. 21, 1980.

One of the declassified documents, dated Jun. 19, 1980, shows that the Argentine-Peruvian-Bolivian operation was clearly in line with the Operation Condor strategy.

The document was a cable sent by James Blystone, the regional security officer (RSO) in the U.S. embassy in Argentina, to Ambassador Raúl Castro.

The memo stated that the RSO met on Jun. 16, 1980 with a member of the Argentine intelligence services, and that during that conversation the source said Batallón 601, with the cooperation of Peruvian military intelligence, had seized four important members of the Montoneros leadership in Lima.

The cable went on to say that the four Argentine citizens arrested in Peru were to be deported to Bolivia and from there to Argentina, where they would be interrogated and "disappeared." The source said Batallón 601 had a good record tracking down terrorists who had escaped from their country and were preparing to return.

The operation hurt relations between the Peruvian and Argentine dictatorships, because Noemí Gianetti’s son Gustavo Molfino, who was accompanying his mother, managed to escape and go public with the case.

The internal quarrels within Battalón 601 are described in another memo. On Aug. 21, 1980, Townsend B. Friedman, political officer at the U.S. Embassy in Buenos Aires, reported to the State Department on a secret meeting he held with a senior Argentine intelligence official.

His contact informed him of the problem triggered by the case of the four political prisoners captured in Lima. Friedman wrote that Colonel Luis Arias and Colonel Julio César Bellene appeared to be trying to blame Colonel Waldo Carmen Roldán for the kidnappings of the Montoneros in Peru, as a power play against Roldán.

Arias and Roldán were sentenced in December to 25 and 23 years in prison, respectively, for taking part in kidnappings and murders in 1980. Colonel Bellene died on Nov. 23, a few weeks before the sentences were handed down.

Now it is the turn of Batallón 601’s partners in Peru to be held accountable for what happened 28 years ago.

But Peruvian President Alan García could become an obstacle. When he was informed of the arrest warrants issued by the Italian judge, he announced that he backed former dictator Morales Bermúdez and that he would oppose any eventual extradition request.