KATHMANDU, Jun 23 2008 (IPS) - Representatives from the Madhesis, Janajatis, Dalits and other indigenous groups were present when Nepal’s newly elected constituent assembly sat for its very first meeting late last month, and 191 of the 601-member assembly were women. 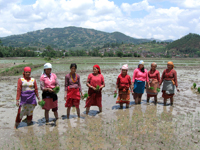 Despite concerns before the election that women members might not reach the 33 percent ratio stipulated by the interim constitution 30 women won seats via the first-past-the-post ballot. The proportional representation ballot allocated 161 seats for women, making the total number 191, which is 33.21 percent of the 575 elected representatives.

"This is a great accomplishment for all Nepali women," says Sarala Lama of Sa-shakti Nepal, a women’s party that contested this election. After the 1999 general elections less than six percent – 12 out of the total 205 representatives – were women. In the present constituent assembly 74 women candidates are from the Community Party of Nepal (Maoist), 39 from the Nepali Congress (NC), 36 from the Communist Party of Nepal – United Marxist Leninist (CPN-UML) and 13 from the Tarai-based Madhesi Janadhikar Forum (MJF).

In constituencies like Gorkha-1 and Bardiya-1, which used to be strongholds of the NC and the UML, Maoist women candidates have crushed veteran politicians like Chiranjibi Wagle and Bam Dev Gautam.

"In this election people voted for transformation, therefore it is not surprising that Maoist women have defeated these old male leaders," says Sarita Giri of Nepal Sadbhabana Party (Anandidebi).

Advocate Sabita Bhandari Baral of the Nepal Bar Association agrees that Nepalis were desperate for change, and it was the inability of the old and male politicians to not realise this that brought about their downfall.

Some elected representatives are war widows. Experts on women’s issues welcome this, but also raise the point that since the process of writing the constitution of a country is complicated, and there are a lot of legal matters involved, it is crucial to have law experts who understand women’s issues in the assembly.

Giri is not so worried. Women were elected because people trust them to be good leaders, she says, and anyone who says the elected women did not go to school is just trying to discourage them.

Maoist representative from Rolpa, Jaypuri Gharti Magar, beat her Nepali Congress counterpart by more than 22,000 votes. At a public meeting in Kathmandu last week she recalled her days as a fighter for the Maoist ‘People’s Liberation Army’. Magar lost her husband during the Maoist ‘People’s War’. For years she did not have a permanent home, and while travelling around Nepal as a fighter she took her infant daughter along.

Sarala Regmi – who defeated UML’s Bam Dev Gautam (17,955 to 13,773 votes) – went back to Bardiya to thank the voters in her constituency for their support. When she was travelling in the villages, local women came out in large numbers to meet with her and congratulate her for having the courage to stand for election in an area that has been the stronghold of UML for so long. Regmi has been with the Maoists since the 1990 People’s Movement but went underground when the Nepal Army killed her husband in 1998.

During the war Regmi used to go from village to village and got to know voters who were desperate for change, were tired of war and the same old politicians in power. "It was extremely hard for some sections of our patriarchal society to accept that women were on the frontline, sacrificing their lives," recalls Regmi. "Now they doubt us and say we will not be able to write a good constitution."

Regmi is confident gender issues will be given a high priority in her party and trusts that some of her women counterparts will be leading various committees.

Magar says that although having 33 percent women in the assembly has been a great victory for them, the presence of women is still scant. "We are demanding 50 percent representation," she says.

Sapana Pradhan Malla, who has been nominated by the UML to the constituent assembly, says that a large number of women in the parliament will not really make a difference if women-friendly policies are not made. "Our movement is not against men, it is against the oppressive behaviour of Nepali patriarchal society, which may not change even if we have 300 women in the parliament," says Pradhan. She says that the women representatives and women’s movement should press for not just gender-sensitive policies but also lobby so that they are actually implemented.

Gender campaigners warn that women’s issues should not be sidelined by party politics, and the rising profile of women highlights an urgent need to restructure political parties to make more room for them. "The biggest challenge and obstacle for women is still the male-dominated leadership in the political parties," says Giri.

Similarly, coordination between representatives and activists is imperative to lobby the government on women’s issues. Sushila Shrestha of the Beyond Beijing Committee says: "This group will not let any issue go off its radar. We will work as a support system for women representatives, and help to push women’s agendas."

Voters across Nepal who wanted change made women win, and as the constituent assembly sits for meetings to write the constitution voters are waiting expectantly to see if their votes will make a difference in the way politics is done.