PHNOM PENH, Jun 22 2008 (IPS) - While Cambodia’s national election is more than a month away the results are in little doubt. The ruling Cambodian People’s Party (CPP) appears certain to return as the dominant party and, for the first time, win enough seats in the National Assembly to rule on its own. 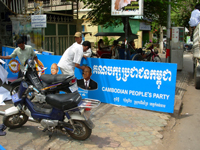 According to the National Election Committee (NEC), approximately 8.6 million Cambodians are registered to vote in the polls, the fourth since the United Nations-sponsored peace plan in the early 1990s heralded the end of one-party rule.

And with Cambodian non-governmental organisations (NGOs) and a number of countries gearing up for a major monitoring effort, charges of dirty tricks and voter intimidation are already being levelled against the powerful CPP.

"The election process can be considered free in the sense that violence is down, people are obviously not intimidated to cast their vote and the administration (of the poll) is better," said Jerome Cheung, country director for the National Democratic Institute (NDI). "It is what happens before the election that does not make it fair, including CPP’s total domination of broadcast media and intimidation of journalists and opposition."

"So far we have found some technical problems, but the capacity of the NEC has been improving and the number of irregularities has been declining," said Mar Sophal, monitoring coordinator with the Committee for Free and Fair Elections in Cambodia (COMFREL).

In one particularly positive change, votes will be counted at the polling station at which they are cast on the night of the election.

In 2003, they were transported to collective counting stations which, observers agree, gave increased scope for manipulation.

The most contentious part of the process, voter registration, took place last year with the NEC deciding to remove nearly 600,000 voter names from the list.

A recent audit of the voter list by a number of organisations, among them COMFREL and NDI, found most eligible voters registered and the vast majority of invalid voters delisted.

"Some (problems) are administrative, some are the result of overzealous party officials acting for their party," said Cheung. "There’s no national conspiracy by any political party manipulating the registration process."

It is commune chiefs, the vast majority of whom are CPP affiliated, who administer the process undertaken manually in handwritten form. Only when the registrations lists are passed on to the NEC in Phnom Penh are they computerised. This opens up the possibility of significant transfer error.

While observers give NEC credit for improving its performance, there are serious misgivings about its capacity and lack of independence. Concerns include the appointment of NEC council members by political parties and the body’s location within the interior ministry. With the exception of the two months leading up to an election, NEC has no permanent sub-national structure and must rely on commune councils that take directions from the ministry.

However, the most serious barriers to free and fair elections stem from the country’s broader political culture. The country’s electronic media, most of which is controlled by CPP, gives little time to opposition party voices.

Independent media outlets are often harassed or – as recently happened in the case of one radio station selling airtime to opposition parties in the central province of Kratie – shut down.

There is also a lingering culture of intimidation that prevents people from speaking out more freely in the pre-election period.

In early June, a coalition of 40 Cambodian civil society organisations expressed deep concern over the increase in political violence in the first half of 2008. There were five assassinations of political party members and 21 cases of political persecution in the first half of the year. Most of the perpetrators are yet to be arrested, let alone tried, by a court system that is heavily biased in favour of the CPP.

Rights lobbies such as Amnesty International and Human Rights Watch have also accused the CPP of political intimidation and manipulation of the judicial system in the lead-up to the July poll.

While lamenting the lack of a more level playing field, commentators concede the opposition’s continued focus on point scoring rather than presenting a unified front also contributes to the situation. Eleven parties will contest the Jul. 27 poll, down from 23 in the 2003 election.

The most serious challenger, the Sam Rainsy Party (SRP), named after its leader, has been weakened by a series of high-level defections to the CPP in return for well-paid advisorships, courtesy state funds.

"I think the CPP knows that we are doing well, this is why they are working so hard on their psychological and political game," said Mu Soc Hua, SRP deputy secretary-general. "Our people are under pressure, heavy pressure every day. Some people with less integrity have been bought off."

The other major political player and CPP’s coalition partner, Funcinpec, has virtually disintegrated after in-fighting following the ouster of its leader Prince Norodom Ranariddh two years ago. Ranariddh – who has formed his own party and is contesting the election from exile in Malaysia- could gain some seats.

A nationwide grassroots political machine, a formidable war chest, and the the backing of most of the country's wealthiest business tycoons augment the CPP’s dominance.

A recent opinion poll by the International Republican Institute (IRI) in Phnom Penh found that 70 percent of Cambodians believe that the country is headed in the right direction. While the poll did not posit any direct correlation to voter intentions, there is little doubt CPP has positioned itself well to take credit for Cambodia’s rapid economic growth while shunting responsibility for problems such as skyrocketing fuel and food prices onto international factors beyond its control.

And while there is speculation that the so-called ‘youth factor’ will be potentially running against the CPP – over 50 percent of registered voters are between 18 and 30 years of age – John Willis, IRI country director, disagrees. "There is no demographic group that is more pro-CPP than youth. The majority of youth is in the rural areas and they are concerned with livelihoods. They want jobs and CPP is able to deliver them."

His decision has been facilitated by a constitutional amendment that allows government to be formed on the basis of a simple majority rather than a two-thirds majority, as was the case in previous elections.

It will be a historic victory for CPP, installed by the Vietnamese when they invaded the country in 1979 and overthrew the Khmer Rouge government , responsible for the deaths of nearly two million Cambodians.

It would also be a personal triumph for Hun Sen, a peasant’s son and former Khmer Rouge cadre, who has destroyed, coopted or outsmarted all his rivals since being installed as President by the Vietnamese in 1985.

The United States, Japan and the European Commission have announced they will be sending monitors for the election.

COMFREL and the other major Cambodian poll monitoring organisation, Neutral and Impartial Committee for Free and Fair Elections in Cambodia, each plan to field some 7,000 short and long term monitors.

Opposition parties are dismissive of this effort.

"All the bad things have already happened," said Hua of SRP. "I say to all these international monitors – you may as well come to Cambodia and have a vacation on election-day.

"The true test for this democracy will be when there is a peaceful transition of power…this has not happened yet," said Cheung. Given what all agree is the one-sided nature of the contest it does not appear to be a test Cambodia will face this soon.