TRIPOLI, Lebanon, Jul 14 2008 (IPS) - In the centre of one of Tripoli's squares in north Lebanon, a large statue has been erected inscribed with the word 'Allah' in Arabesque calligraphy. The statue reflects the city's reality, especially in light of the recent rise in Salafism, a radical form of Islam. 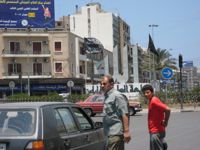 In Abi Samra on one of Tripoli's hills, men with long beards, dressed in white dishdashas – a style unusual for Lebanon – walk along whitewashed buildings, attesting to the growing grip Islamists have on the city.

"Salafism was founded in the sixties in Lebanon by Sheikh Salem el-Chahal," says Sheikh Bilal Chaaban, head of the Tawhid movement (another radical Islamist faction, separate from Salafism). After the death of its founder, Salafism branched into various factions, one of which is headed by the founder's son, Dai Islam el-Chahal.

"During his lifetime, Sheikh Said Chaaban, founder of Tawhid, was supported by other Salafists. After his death, however, both movements drifted apart, with the Tawhid still clinging to the dream of establishing a Muslim state in northern Lebanon," says Moustapha Allouch, MP.

Other small Salafist schools also emerged in Tripoli, such as the Siraj Mounir Boukhari and Safwan Zoabi movements.

"Salafists believe in a strict interpretation of the Quran and in practising Islam as it was at the time of the prophet Muhammad and his disciples," says Sheikh Omar Bakri, a radical cleric who was expelled from Britain in 2005 for his alleged links with al-Qaeda. According to the cleric, Salafism is essentially built on three pillars: belief in one god, the 'daawa' or the missionary task, and 'jihad'.

"Most Salafists, however, only apply the first two principles of true Islam without fulfilling the third, the jihad. True Salafism thus does not exist in Lebanon," he says.

Lebanese Salafism is of a doctrinal and missionary nature that has been allowed to grow because of the country's complex and diverse religious undercurrent (Lebanon, a country of four million, officially recognises 18 religious communities). In Tripoli, Salafist factions rely on a network of mosques, NGOs and schools, and receive financing from various Arab countries, such as Saudi Arabia, Qatar and Kuwait.

The armed bodyguards surrounding the headquarters of some Islamic and Salafist organisations, and the relative opulence of the homes of the clerics reflect the growing affluence and number of such extremists flowing into the city. "The allegiance of Salafist factions to the foreign powers that fund them has promoted division among their ranks, as they reflect the alliances or dissensions of their foreign allies," says Bakri.

The intricate political and social fabric within the various Salafist movements is deeply divided, as with the rest of Lebanon. Not only are Islamic factions in Tripoli manipulated by foreign powers, but they are also pawns in the hands of local politicians, who use them in their political game.

"By radicalising people, political factions can guarantee a larger base of supporters in the upcoming 2009 parliamentary elections. Salafists, like many others, are lured by false Messiahs," says Sheikh Chaaban, referring to the role of politicians in the ongoing violent conflict in Tripoli between Sunnis (including radical Islamists) and a pro-Syrian minority.

Different sources interviewed by IPS report that most Salafists seem to follow the government's majority bloc, while other radical Sunni factions, such as Tawhid, are sponsored by either Syria or Iran, and hence, support the opposition.

"Most Salafists are allied to the Saudis and, thus, aligned with American Middle East policy. They maintain excellent relations with the government and the Hariri family," says Bakri. The Hariris are a powerful Lebanese political clan with strong ties to Saudi Arabia. Saad Hariri, son of slain prime minister Rafik Hariri, heads the majority parliamentary coalition in Lebanon.

According to a source, who chose to remain anonymous due to the topic's sensitivity, many Salafist preachers are on the payroll of Arab embassies located in Lebanon. Bakri says this support can be partly explained by Sunnis' growing fear of Lebanese Shias, represented by Hezbollah.

Bakri believes that although Fateh el-Islam (a terrorist group that battled the Lebanese army at the Nahr el-Bared Palestinian refugee camp in Tripoli for over three months in 2007) might have been spawned by Syrian intelligence, it was then probably hijacked by local political factions from both sides of the divide. "This can be clearly observed in the series of bombings orchestrated by Fateh el-Islam, as some were condemned by their leader Chaker el-Absi while others were condoned, indicating conflict within the organisation."

As for al-Qaeda's possible hand in Lebanon's growing Salafist movement, the country's diverse sectarian landscape and traditional allegiance of Sunnis to the government has in fact hindered its influence. Although the organisation might have many staunch supporters who believe in the ideology it advocates, it has not necessarily been able to achieve an infrastructure.

According to IPS sources, most Salafist movements in Tripoli have regular contacts with the police, military or intelligence, and are being supplied with weapons. Allouch believes that most Islamist factions are now armed.

To curb the risk of a violent outbreak, the MP states that Saad Hariri worked on convincing Salafists to contribute to the project of state building, but this work was hindered by the May 7 events (when a demonstration organised by the opposition Shia Hezbollah and Amal parties turned into a one-week war that further exacerbated divisions between Sunnis and Shias). "Many Sunnis, who are aware that al-Qaeda will only bring a spiralling wave of violence, feel they are in need of an army to defend themselves against Hezbollah," says Allouch.

Hezbollah is currently the only Lebanese faction officially permitted to retain heavy weaponry, which could constitute the need for self-defence in the minds of some Salafists. Sheikh Abou Bakr Chahal, son of Sheikh Salem Chahal, believes the third aspect of Salafism, jihad, can be practised in certain threatening circumstances and under the banner of legitimate defence. "A re-enactment of the May 7 events could certainly prompt a new jihad," he warns.