PHNOM PENH, Jul 28 2008 (IPS) - The old saying ‘be careful what you wish for’ is apt in the wake of the decisive victory of the ruling Cambodian People’s Party (CPP) in the country’s national election on the weekend. 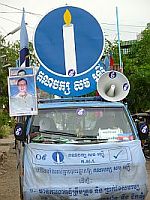 Electioneering on the streets of Phnom Penh by the opposition Sam Rainsy party Credit: Andrew Nette/IPS

"They (CPP) now have a free chance to conduct their affairs and do what they want, said one prominent Cambodian observer. "The question is what will they do?"

Installed by the Vietnamese in 1979, CPP or the People’s Republic of Kampuchea government as they were then called ruled throughout the 1980s until the fall of the Soviet Union and economic reality forced them to accept an international peace deal and UN-supervised multi-party elections in 1993.

Although they lost that poll to the royalist Funcinpec party headed by Prince Norodom Ranariddh, son of the country's former monarch Norodom Sihanouk, CPP bluffed and bullied its way into a coalition arrangement continuing, in name at least, until these elections.

"With huge power comes huge responsibility. Before CPP could blame others for their problems," said the Cambodian observer. Now there is no one to blame if things go wrong but themselves."

Despite reports of irregularities, especially in the capital Phnom Penh where the opposition is claiming a significant number of people were prevented from voting because of problems with the voter list, 75 percent of Cambodia’s eight million registered voters cast their ballots on Sunday.

While the exact size of CPP’s majority remains unknown it will easily be enough for them to govern alone, as the country’s Prime Minister Hun Sen had already indicated is his wish.

Such a strategy is possible following a constitutional change stipulating government can be formed on a simple majority rather than two-thirds majority as was the case in previous elections.

While the Sam Rainsy Party, the main opposition force, made some gains, overall the opposition’s share of seats in the country’s 123 member National Assembly could be reduced compared to the previous poll in 2003.

Virtually every local and international political commentator had expected CPP to win and win big.

A national grassroots machine, using much the same structure as was in place in the 1980s, deep pockets, and control of the country’s electronic media, meant the result was never in doubt.

In addition to their unequal access to the media, opposition parties and some human rights organisations also charge CPP with orchestrating a campaign of intimidation, vote buying and dirty tricks in the lead-up to the July 27 poll.

Although it is unclear to what extent it was a factor, many feel the nationalistic feelings whipped up by the country’s standoff with Thailand over the 11th century Preah Vihear temple, may have worked in CPP’s favour.

The dispute, now entering its second week, has seen 500 Thai and 1,000 Cambodian troops, squaring off against each other over an approximately four square kilometer disputed piece of land near the temple.

However, the most significant issue behind the win is Cambodia’s so-called ‘peace dividend’.

Although the country remains beset by problems, many Cambodians believe the country is going in the right direction after decades of instability. The civil war is over and the economy has been growing rapidly.

In the months leading up to the ballot, CPP positioned itself well to take credit for this rapid economic growth while shunting responsibility for problems such as skyrocketing fuel and food prices onto international factors beyond its control.

The business community, including many foreign interests and most of the country's wealthiest local business tycoons, strongly supported CPP’s continued hold on power.

A weak and divided opposition further assisted CPP. While a preliminary estimate by the Committee for Free and Fair Elections in Cambodia puts the non-CPP total vote at just under 40 percent, this was split between 10 parties.

The royalist Funcinpec party, which originated in the early 1980s as part of the anti-Vietnamese resistance and has subsequently stood in as the CPP’s coalition partner since the first poll in 1993, has been decimated.

"The opposition will have to formulate a new strategy involving younger people, not just focusing on attack politics," said the Cambodian observer. "They are also going to have to get serious about unifying or face the prospect of being further marginalised."

While there are factions in the CPP their deliberations and internal differences have been largely kept out of the public eye and held in check by rigorous party discipline.

Although these could now come to the surface given CPP’s unassailable hold on power, others contend that the party’s long history means it’s senior members are mature enough to handle conflict and share power.

"I can only say that it is an enormous task and whether it (CPP) stays monolithic or not depends on whether Hun Sen can control his own party," said Benny Widyono, former UN Secretary General’s Representative in Cambodia during the peace plan in the early 1990s.

The son of peasant farmers, 57 year-old Hun Sen is widely derided in much of the Western media for his combative, sometimes bizarre political invective, and his background as a former Khmer Rouge cadre before he fled to Vietnam to join the resistance to Pol Pot.

He has been in power since being installed as head of the Vietnamese-backed regime in 1985.

"He is always three or four steps ahead of the opposition because he is smart and works until 2 am in the morning and he is very good at picking people to support him," said Widyono.

Instrumental in steering CPP towards market economics in the late 1980s, Hun Sen has since co-opted, removed and outsmarted all his rivals.

"A person who sits on the head of the tiger cannot fall down," said Chea Vannath, a regular commentator on Cambodian political affairs. "You must hang in there. Same for CPP they feel they must stay in power to stabilise things."

Exactly how much power Hun Sen has and whether he is prepared to tackle some of the vested interests standing in the way of reform, are key questions following the Jul. 27 election results.

In addition to negotiating a settlement to the ongoing conflict over Preah Vihear, the country faces significant economic challenges.

Although successful in generating billions in foreign investment, Cambodia’s weak regulatory and legal frameworks, endemic corruption and the poor state of its judiciary are significant barriers to long-term sustainable growth.

"They (CPP) are good at many things but their key weakness is that they are not good at the economy," said Vannath.

Cambodia is facing a looming resource boom, with the immediate focus being exploration already underway in the waters off Cambodia’s coast to determine the extent of the country’s oil reserves, thought to be significant.

‘Do we become Malaysia or Nigeria?" asked Vannath.

"Unless the CPP strengthen their leadership of the economy the problems we currently face will grow."

Managing Cambodia’s growth, while ensuring greater equity, is another challenge.

"We face two options," said the Cambodian observer "We can continue like this, building the country for 5 – 10 percent of the population who are rich or we can have far more equitable growth where the rich can still grow but at a much slower pace."

There are also concerns that CPP’s resounding victory could result in a reduction of the already fragile political space available to opposition and human rights organisations.

The poor showing by opposition parties in Saturday’s poll may further reduce the checks and balances in the nation’s political system.

But while some question whether a return to the one party political dynamics similar to the eighties is possible, the reality is Cambodia has changed so over the last two decades that such a move, even if the government wanted it, is impossible to pull off.

Cambodia has a small but growing middle class and an overwhelming young population that are exposed to the world that, as the country develops, will begin to demand that their interests are safeguarded.

"A return to 1979? Definitely not," said Widyono. "In 1979 Cambodia was completely isolated, now you have journalists, foreign businessmen and aid people all here. The place has fully opened up and it cannot go back."