BOA VISTA, Roraima, Brazil, Aug 21 2008 (IPS) - An imminent decision by Brazil’s Supreme Court on the demarcation of the Raposa Serra do Sol indigenous reservation in the Amazon jungle region has the country’s native communities on edge, because of the precedent it will set. 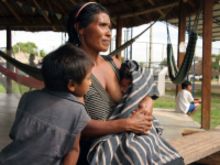 Maxucí family in village of Do Barro. Credit: Courtesy of CIPÓ

Raposa Serra do Sol is in the Amazon jungle state of Roraima at the northwestern tip of Brazil, a land of water and abundance.

The 1.7 million hectare reserve was officially demarcated by the government of President Luiz Inácio Lula da Silva in 2005, after judicial appeals and debates that dragged on for nearly two decades. The decision was based on the principles laid down in the 1988 constitution.

The Supreme Court is set to decide next week whether or not to uphold the demarcation of the reservation as a single, unbroken territory.

But since 1992, invasions of indigenous land by large-scale rice producers have become frequent, and in just 13 years, rice plantations in the area covered by the reservation grew sevenfold, to 14,000 hectares.

In March, the Lula administration sent in the federal police to evict a group of rice farmers who have refused to leave the land they are farming. The landowners responded with violence, and 10 indigenous people were injured.

“They began to shoot at us, they threw bombs and we started to leave. I was hurt on one of my legs, my back and my head,” says a young Macuxi Indian.

Santinha Da Silva was also there that day, with her three children. “I’m not going to say I’m not afraid,” she says. “I am scared, but I’m going to confront them. If they want to kill me, then they can do that, as long as they leave the land to my children.”

Two weeks after the start of the police operation, the Supreme Court not only called it off, but also accepted a legal challenge which, in the case of a favourable decision, would allow the rice farmers to continue occupying portions of the indigenous territory, setting a dangerous precedent.

“Not only Raposa Serra do Sol would be at risk, but all indigenous reservations in the country,” says Rosane Lacerda, a law professor at the University of Brasilia.

No rice farmer has paid the fines owed for environmental damages, and none are in jail for the attacks on the local indigenous residents.

“Several of them went to prison, but they were only in for a short time, since they have money and political influence, with which they are able to turn these cases into interminable legal disputes,” says Paulo Santille, head of the identification and delimitation of indigenous lands department in the National Indigenous Foundation (FUNAI), the federal agency in charge of indigenous affairs.

James Anaya, the recently appointed United Nations Special Rapporteur on the rights of indigenous people, is currently visiting Raposa Serra do Sol to assess the situation there.

Lacerda says it is not far-fetched to talk about “a declared war on indigenous people by groups that have economic interests on their lands.”

For five centuries, the indigenous people of Raposa Serra do Sol have suffered invasion after invasion of their land, first by the Portuguese colonialists and later by ranchers, “garimpeiros” (gold panners) and large landholders.

All of these groups employed the local Indians as labourers. Ranchers sometimes even branded their indigenous workers, like cattle.

Orlando Pérez Da Silva, “tuxaua” (chief) of the village of Uiramutá, exemplifies that tragic history with his own life. “The non-Indians arrived and invaded our land. They started to hire us on their haciendas. But when an Indian would ask for his wages, he would get a beating and would be thrown out,” he recalls.

Da Silva spent six years as a slave: “We were enslaved. To buy a hammock we had to work for an entire month.”

One of the organisations helping to coordinate the struggles of indigenous people, the Commission of Indigenous Organisations of the Brazilian Amazon, is presided over by a member of the Sateré-Maué community, Gecinaldo Barbosa, who says the problem goes beyond Brazil’s borders.

“Amazonia is in Brazil, but the problem is a global one, of concern to anyone who defends life,” he argues.

The pressure of agribusiness and large-scale agriculture on indigenous lands has intensified as a result of the “biofuels revolution” and the need to produce feed for the world’s livestock, says Barbosa.

Beto Ricardo, coordinator of the non-governmental Socioenvironmental Institute of Brazil (ISA), says the Lula administration is an economic development-oriented government immersed in a “certain climate of economic euphoria.”

“The pressure on indigenous people is multifold,” says Ricardo. “It doesn’t only come from agribusiness, but also from public works like roads, hydroelectric plants or dikes.”

For Nilva Barauna, superintendent of the Brazilian Institute of the Environment (IBAMA) in Roraima, Raposa Serra do Sol is “the last agricultural frontier, on which agribusiness has its sights.”

“We will see a major modification of the landscape here, of water resources and the fauna and flora as a result of the rice plantations. The agrotoxics used by the landowners are polluting the rivers and hurting the aquatic fauna,” says Barauna.

Gercimar Moraes Malheiro, a Macuxi Indian and the coordinator in Boa Vista – the capital of Roraima – of the Project for the Protection of Indigenous Populations and Land in Amazonia, also complained about the environmental damages: “All the poison, all the residues from the processing of rice, are dumped into the rivers.”

Despite the violence of landowners against local indigenous people and IBAMA’s reports on the environmental impact of rice farming, the immense majority of non-indigenous residents of Roraima want the rice farmers to stay, arguing that they bring jobs and money.

Many people interviewed in Boa Vista expressed fears that the price of rice would shoot up or that an economic crisis would be triggered if the rice farmers were expelled.

But the superintendent of IBAMA says the rice farms actually offer little to the local residents, because “most of the work is mechanised,” the plantations don’t create jobs and don’t pay taxes, and the benefits are concentrated in just a few hands.

According to Ricardo, the head of ISA, “indigenous lands will not survive unless there is an ecological and economic realignment of the country and of Amazonia.”

As a metaphor for what is happening, he says “Brazil is the only country named after an (almost) extinct tree” – the Brazilwood (Caesalpinia echinata) tree, whose wood provided a highly prized red dye. The species is now on the verge of extinction.

There are 604 indigenous reservations in Brazil, which are home to 215 distinct native groups totalling around 600,000 people.

In the indigenous world view, there are no borders, or bureaucracy or a concept of private, individual ownership of land. Indigenous people in Brazil are fighting to defend their own model of development at a time when nature “is rebelling against the world,” as native leaders said.

The original inhabitants of Raposa Serra do Sol have developed a self-sufficient economy. They grow rice, beans, plantains and cassava, raise 35,000 head of cattle, and combine “white man’s medicine” with their traditional remedies, based on local plants with curative properties.

“As indigenous people, we are going to defend nature because that is our conception of life, that cosmogonic view of the world, for the future of humanity,” says Barbosa.

Pueblos Hermanos, a non-governmental organisation from Spain, and the Madrid-based audiovisual company Compañía de Información y Proyectos Originales (CIPÓ) have launched an awareness-raising campaign on the vulnerability of indigenous people in Raposa Serra do Sol.

The initiative has included messages of support sent to the local indigenous communities and letters to the Brazilian Supreme Court urging the expulsion of the rice farmers, sent from the web site of Pueblos Hermanos, http://www.puebloshermanos.org.es. And in September, the two groups will present a documentary filmed in Raposa Serra do Sol.

*The author is head of content and communications at CIPÓ.