LAHORE, Nov 17 2008 (IPS) - Some 370 foreign actors, musicians, dancers and puppeteers have defied the warnings of their friends, families and governments to participate in an international performing arts festival in Lahore, cultural capital of the world’s ‘most dangerous country’. 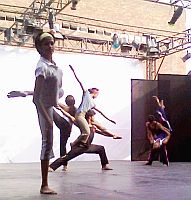 This is the 26th international festival organised by the Rafi Peer Theatre Workshop (RPTW), a group launched in Karachi in the early 1980s by the family of the late Rafi Peer, the Germany-educated ‘grand old man’ of modern Pakistani theatre who died in 1974. His youngest sons, twins Faizaan and Sadaan, started out with puppet and theatre performances in Karachi.

In 1992, they organised the first international festival in their native Lahore, springing from artist Faizaan’s passion for puppets, bringing together puppeteers from around the world. Since then, the Peerzadas (literally, ‘Peer’s sons’) as the family is called, have organised up to three international festivals a year, showcasing puppetry, dance, music, and theatre.

The World Performing Arts Festival brings together all these disciplines, plus film.

Security concerns made this year’s festival the ‘toughest ever’ as crucial sponsors backed off, Faizaan, 50, told IPS. "Before, foreign governments were telling their nationals to travel to Pakistan only on business. Now they are telling them not to travel here at all."

Given the negligible government support (only venue and security), the group relies heavily on private sponsors to meet their Rs 40 million (500,000 US dollars) budget. "For example, the Swiss Council for Cultural Relations, Pro Helvetia, would pay for the travel of our French and German speaking delegates. Not this year," explained Faizaan.

"Other organisations used pitch in, so if it cost 15,000 dollars to bring in a group, we would only have to bear 3,000 dollars of that cost. Now, Pakistan isn’t a country they want to invest in. We’ve lost some 250 performers from Europe because of this," he added.

"Two years ago, we had 800 foreigners. Those who are here now came because of their personal commitment and our huge personal efforts. I wrote to all of them saying that in good times you can travel anywhere, but it is when times are tough that you need to stand with us."

The foreign delegates representing countries including Iran, Afghanistan and India in the region and the Czech Republic, United States, Britain, Ireland, Italy, Germany, Austria, Norway, Netherlands and France further afield mingled with about 700 Pakistani colleagues to affirm that the language of music, art and culture has no barriers.

Walking around the circular red-bricked venue with its open-air theatre and temporary marquees before show-time, it is easy to spot foreign participants as they come to the venue from various hotels where they have been lodged.

Adriano of Jack and Joe Theatre (Italy/Germany) has attended this festival since 2005. "Pakistan does look very dangerous," he admitted. "But it’s ok for us," he said, gesturing to his colleague as they headed to the Festival office to collect their name cards. "The people at the organisation are very nice, and it’s a nice atmosphere. We get to meet artists from other countries. It’s a pleasure to be here again."

This is the fifth time for Guillame de Remusat, a manager and producer from France. "The Peerzadas are my Pakistani family," he told IPS in the crowded Festival office as staff scrambled to put together the performers’ identity cards and adjust complicated schedules.

He has always "found friendly, polite people, eager to learn about other cultures and people. So I don’t feel scared. I feel comfortable here despite all the trouble. But it is not always easy to convince others to join me. They are used to a different level of security and accommodation."

Still, he has managed to bring many artists to previous festivals, and this year, two performances from France: Abaji, a Lebanese-born multi-instrumentalist and Mano Santa, an Argentinean music band, both here for the first time.

"I am spreading the spirit of the festival in Europe," grinned de Remusat. He is working to link this festival with the annual music festival of Les Suds a Arles in the south of France in July, "like a sister festival".

"Everyone is very friendly," the dread-locked Marcho Jabea who plays bass guitar in Mano Santa told IPS in French-accented English. "It is very important to come here and meet other performers from around the world".

Abaji likes to travel around the world mainly to meet other musicians. He feels he is "back home" in Lahore and is thrilled about his collaboration with Sania Noor, an obscure Pakistani folk singer. "We just met and it was like we were close friends. We rehearsed out here, completely impromptu. She sang an Urdu song over my music. It was fantastic."

Norwegian keyboard instrumentalist and composter Ingrid Kindem is visiting Pakistan for the third time. Three years ago the Norwegian cell phone giant Telenor flew her over for their launch in Pakistan, at which she collaborated musically with the popular Pakistani band Fuzon.

"I came back the next year and recorded with them. The musicians and the music here are so inspiring, it’s great to see such young musicians who are popular," she told IPS. "It’s wonderful to work with them. I like how they use vocals, very rooted in their own way of singing, but also able to create inter-popular music."

She shrugged off a question about the security situation. "I feel completely secure. A lot of people (back home) tell me not to go. The media shows us a Pakistan that is very different. I have never seen any furious people here."

"Look, things can happen anywhere," she added. "I really enjoy coming back here. I am overwhelmed by how friendly people are, they treat me like a gift from God."

Kinden said she tries to get Pakistani musicians over to Norway, but there are always visa problems. "It’s very unfair, because when I want a Pakistani visa, I get it in just three days."

Chicago-based American stand-up comic Azhar Usman, a lawyer in his previous life who tours with the ‘Allah Made Me Funny’ show back home with other Muslim American comics, echoed Kinden’s words. "There’s a lot of media hype about Pakistan. It’s like a fabricated reality on television. I don’t pay attention to all that garbage. There are crazy people everywhere."

The only problem he had was getting his visa because of his parents’ Indian origin – a problem all the over 150 Indian participants faced, thanks to ongoing bureaucratic restrictions that Pakistani and Indian visitors to each other’s countries continue to face despite the ongoing peace talks.

Celebrated British stand-up comedienne Shazia Mirza, whose parents were born in Pakistan, had a packed hall roaring with laughter at her politically incorrect, bawdy lines delivered with deadpan confidence. She has been to Pakistan before, but this was her first time performing here.

She told IPS she had been apprehensive about coming to Pakistan "given the state it’s in" but all her fears were unfounded. "I was also worried about whether they’d laugh at themselves. I was really surprised. It’s been a fantastic experience. They understood all the references and laughed and weren’t offended."

Heightened security caused problems for many locals at the festival. "It was very intimidating to go through so much security. We had to park really far away, my bag was checked three times," said Alefia T. Hussain, who brought her daughter and two other girls to see the Czech puppet show. "But it’s good that they’re taking so many precautions," she added.