UNITED NATIONS, Nov 25 2008 (IPS) - Activists and U.N. officials called on governments to take stronger action to end violence against women Tuesday, with at least one out of every three women around the world having been beaten, coerced into sex or otherwise abused in her lifetime – with the abuser usually someone known to her. 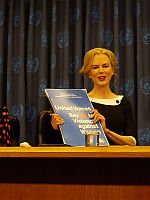 The actress Nicole Kidman at the U.N. on Nov. 25, the International Day for the Elimination of Violence against Women. Credit: Wolfgang Kerler/IPS

"Perhaps the most pervasive human rights violation that we know today, it devastates lives, fractures communities, and stalls development," and "is a problem of pandemic proportions," notes a report by UNIFEM, the U.N. Development Fund for Women.

More than five million people worldwide have joined UNIFEM's "Say NO to Violence against Women" campaign since its launch in 2007, and added their names to a call to make ending violence a top priority of governments.

"No less than 29 heads of state or government and 188 ministers representing 60 governments have added their names. Over 600 Parliamentarians from more than 70 countries have joined the effort," said Ines Alberdi, the executive director of UNIFEM.

"Now, we must use this momentum to implement laws and policies already in place. Despite the fact that more governments than ever have passed such laws, there is still a wide implementation gap," she emphasised.

"We urge the adoption of accountability standards with minimal standards of protection and response, such as prompt police response, health and legal services, shelters and safe options for women surviving or fleeing life-threatening situations, national hotlines, available 24 hours a day, and accountable judiciary and national action plans," she said.

Alberdi added that the U.N. Trust Fund to End Violence against Women, which UNIFEM manages on behalf of the U.N. system, will have provided new grants amounting to more than 19 million dollars in 2008.

This was more than the total disbursed through the Trust Fund since its inception in 1996.

One of grantees of UNIFEM is Marie Nyombo Zaina, coordinator of National Network of NGOs for Women's Development (RENADEF), Democratic Republic of Congo. She said that in the DRC, abuses are committed against women and children as a way to pacify combatants and soldiers, and provide them with sexual services.

"I am myself a victim of violence. During the second year of my graduate studies, my father forced me into polygamous marriage. I was beaten up virtually every day," she told reporters.

After fleeing her husband, she completed her graduate studies in South Kivu, and founded a group titled "Action for the Promotion and Defence of the Child and the Women," which later evolved into RENADEF.

"However," she said, "women's organisations taking on the fight against violence and the spread of HIV/AIDS are not very popular. They don't receive the same funds as those led by men."

She said that funding from UNIFEM has allowed her help women like Madame Nadine from Goma, in the province of North Kivu, who was gang-raped by armed individuals in front of her husband and her four children.

According to Zaina, they also gang-raped her two daughters aged 14 and 16 years. Later, they killed her husband and the two boys and took the two daughters with them to the mountains.

"Desperate, depressed, and inconsolable, Madame Nadine was welcomed into a RENADEF shelter where she is receiving support and care and undergoing psychological rehabilitation," said Zaina.

She stressed that in order to help more survivors such as Nadine, they must confront challenges like ending impunity; increasing the number of trained legal personnel in the judicial sector, and providing shelter, medical treatment and care for victims.

As one of the biggest supporters of initiatives on violence against women, the Netherlands contributed eight million dollars to the U.N. Trust Fund, and is planning to spend about 60 million euros for this cause over the next three years.

"Human rights, peace, and security are universal goals. So you might think that these are gender neutral terms and issues, but this is not the case. For a woman, security is something different that it is for a man. In most countries a man can go out at night, whereas a woman has to watch out at night," said Piet de Klerk, deputy permanent representative of the Netherlands.

Both de Klerk and Alberdi cited the case of a 13-year-old girl who was stoned to death in Somalia just a month ago as an example of the brutality towards women that takes place in various corners of the world.

"After she reported that three men had raped her, the militia in charge of Kismayo had accused her of adultery and sentenced her to this fate," said de Klerk.

Cynthia L. Rothschild, senior policy advisor at the Centre for Women's Global Leadership at Rutgers in the U.S. state of New Jersey, told IPS that "Overall, there needs to be a much greater, a much deeper allocation of funds from governments, from U.N. agencies, because we're talking about a global and universal problem that requires billions of dollars to appropriately address."

The Centre for Women's Global Leadership launched the "Sixteen Days of Activism against Gender Violence," an international campaign that works closely with UNIFEM and other women's NGOs around the globe.

Rothschild told IPS that Sixteen Days of Activism was chosen because it is symbolically links Nov. 25 and Dec. 10, International Human Rights Day, to emphasise that such violence is a human rights violation.

Rothschild expressed her disappointment with the functioning of current system in tackling gender inequality. "We feel that a new system has to be in place, because what exists now is not working well enough," she said.

"Moreover, what we need to do is to create something that is able to much more effectively address gender inequality. This new entity needs to be resourced at a level well beyond what the women agencies as they exist today have access to," she told IPS.