VENEZUELA: The Cost of the World’s Cheapest Gasoline

CARACAS, Dec 29 2008 (IPS) - The world’s most inexpensive gasoline is sold in Venezuela, through a longstanding subsidy programme that benefits car owners while depriving the oil industry of a large source of funds for reinvesting. 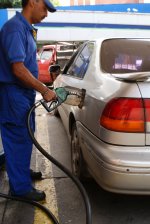 "What’s the problem? I suppose if we produced wheat or tractors they would be very cheap here. If we have oil, then gasoline should be cheap," 38-year-old Alexis Santana, who has been driving a bus since he was 22, told IPS. The argument may seem logical in a country that is one of the world’s biggest oil producers.

For the past 10 years, gasoline has cost between three and four cents of a dollar per litre. Soft drinks cost 20 times more, a bottle of mineral water 25 times more, and an espresso in a local café 30 times more.

Customers often leave more in tips to service station attendants than what they actually pay in gas.

"Gasoline is practically given away here for free," said Finance Minister Alí Rodríguez, who has done stints as energy minister, secretary-general of the Organisation of Petroleum Exporting Countries (OPEC), and president of the state oil monopoly PDVSA.

"It is obscene to sell our gasoline this way. We might as well give it away!" President Hugo Chávez said in a January 2007 speech, when he ordered studies to be carried out into the possibility of raising domestic gas prices. However, such a move would be almost tantamount to political suicide in Venezuela.

PDVSA and the state heavily subsidise the price, mainly to the benefit of the owners of the four million private vehicles circulating in this country of 27 million.

"According to our numbers, Venezuela consumes nearly 750,000 barrels a day of liquid fuels, 70 percent of which is gasoline, and the difference between domestic prices and prices paid in net oil consumer countries will amount to 26 billion dollars this year," economist Asdrúbal Oliveros with Ecoanalítica, an economic consultancy in Caracas, told IPS.

If Venezuela were to sell fuel at cost on the domestic market, the subsidy would still total 17 billion dollars, said the analyst.

According to official figures, the vehicles circulating in Venezuela consumed 400,000 barrels a day of gas and diesel, which meant a subsidy – based on the difference between domestic and export prices – of 12.5 billion dollars

It costs PDVSA two cents of a dollar to produce one litre of gas, which it sells domestically for three cents.

"By giving away more than 3,000 dollars a year away to every car driver, PDVSA has been left without money that could be reinvested with a view to improving the domestic system of fuel distribution, stimulating other sectors, or reducing the company’s debt," Ramón Espinasa, who was PDVSA chief economist from 1992 to 1999, told IPS.

And although Venezuela is a major oil exporter, it is facing growing purchases of oil derivatives, including 50,000 barrels a day of gasoline blending components, according to José Suárez Núñez, a veteran journalist who specialises in the oil economy.

The low price of gasoline "is essentially a regressive subsidy, because most of the fuel is consumed by private vehicles belonging to the middle and upper classes, while the poor use the deficient public transport system," said Espinasa.

High economic growth rates, low domestic gas prices and government incentives like the Family Vehicle Programme, which exempts certain cars from the value added tax, have fueled a buying spree of cars, with new records set each year since 2004, until reaching a total of 400,000 new cars sold in 2007.

However, restrictions on imports reduced sales to 252,000 cars between January and November 2008, according to the Venezuelan automotive industry chamber.

"Small service stations, on the other hand, are hurt because with these prices, the cash flow is small and it’s not worth investing in installations, we cannot seek large loans, and our employees are poorly paid," José Costa, the manager of a gas station in Caracas, commented to IPS.

Through its broad range of social programmes, the Venezuelan government has made public spending not only the engine of economic activity but of improved living standards as well, based on soaring oil prices. For that reason, it must feel the burden of the heavy subsidy for domestic gas prices, said Oliveros.

In the 1990s, a World Bank study on subsidies in Latin America showed that with the four billion dollars that the Venezuelan state shelled out to gasoline consumers, "41,000 primary schools or 7,000 secondary schools a year could be built," said Cordeiro.

PDVSA contributed nearly 14 billion dollars to the government’s social programmes in 2007, according to the company’s annual report.

The social programmes, or "missions", include literacy training, primary health care provided by Cuban doctors in the slums, food for the poor at subsidised prices, soup kitchens for low-income women and children, free eye operations, dental care, microbusiness loans, support for cooperatives, scholarships at all educational levels, and stipends for the unemployed who agree to take training courses.

But with the price of Venezuelan oil plunging to one-quarter of its high of over 120 dollars a barrel, the country will be hit hard by the current global crisis.

"The fiscal situation could become so critical that the government will turn to measures like devaluation, hiking taxes or increasing the price of gasoline. But what it is not likely to do is cut spending," said economist Emeterio Gómez.

Subsidies, whether direct or indirect, usually translate into a comparative advantage that boosts the industry’s competitiveness.

"But that is not the case in Venezuela, because the advantage of cheap gasoline is cancelled out by price controls on other products, exchange controls, traffic jams and the poor state of the roads," said Oliveros.

Because of the lack of road transport corridors, a truck hauling merchandise from the Colombian border in the west to industrial or consumption centres in eastern Venezuela must drive through Caracas and other large cities.

The low gas prices also stimulate contraband with Venezuela’s neighbours – Colombia, Brazil, and to a lesser extent, Guyana – estimated at 25,000 barrels of fuel a day by the Energy Ministry, which at an average price of 90 dollars a barrel in 2008 would represent 800 million dollars a year.

Investigative reports by the local press estimated that some 80,000 families in northeastern Colombia depend on smuggling of fuel for all or part of their income. The fuel is carried across the border in plastic containers and jugs on bicycle or by foot, or in trucks that form part of large-scale smuggling rings.

"The problem is the difference in prices, because fuel in Venezuela is 20 times cheaper (than in Colombia), and if this problem is not resolved, it will be impossible to combat smuggling," said Lino Iacampo, president of the association of gasoline distributors in the border state of Táchira.

"And people in Táchira are often angry because they can’t find gas, or because it is rationed out," he added.

The cult of owning one’s own car has become so entrenched that municipal authorities in Caracas are requiring that in certain lanes during rush hour, each vehicle must carry at least one other person besides the driver.

During rush hour traffic jams, cars carrying an average of 1.2 people move at an average speed of five kilometres an hour.

But as Oliveros and other analysts point out, the lack of safety on buses, where there has been a rash of armed robberies, and in taxis has led people to desperately seek to purchase a car of their own.

Nearly all major arteries in Caracas are packed from dawn till late at night. Aliana Giménez, who lives in the commuter city of Guatire, east of the capital, told IPS that "my life has been reduced to sleeping on the bus, working, getting home, showering and changing my clothes, taking what amounts to a little nap at night, and setting out for Caracas again before the sun comes up."

Economists say the first step towards a solution could be gradually increasing gasoline prices to the halfway point between the domestic and export prices.

"But that measure would only work if economic policies are modified to keep inflation down; otherwise it would cause more problems," said Oliveros.

Venezuela has the highest inflation rate in the hemisphere: around 35 percent a year, and over 50 percent for foodstuffs, which in this country are transported mainly by road.

But in the past, gasoline price hikes have sparked severe social protests, the worst of which was the 1989 "Caracazo", in which hundreds of people were killed in the brutal crackdown by security forces.

In Venezuela, such a move could be extremely costly in terms of votes and support.

And Chávez – who has not touched the price of gasoline since he took office in 1999, and who has held elections of some kind nearly every year – may be planning an early 2009 referendum to seek a constitutional amendment that would make it possible for a president to run for indefinite reelection.