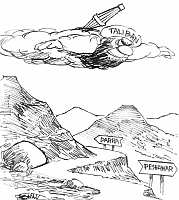 These include the Taliban, the international al-Qaeda and Pakistan’s own home-grown ‘holy warriors’, cultivated during the 1980s Afghan war against the occupying Soviets.

The approach taken by Zardari, Pakistan’s first popularly elected president in over a decade, differs markedly from the Pakistani establishment’s long-held stand that the country’s real enemy is India.

Since gaining independence from colonial rule and partition on religious grounds, in 1947, India and Pakistan have fought four wars, counting the Kargil ‘war-like situation’ of 1999 – a year after both countries tested nuclear weapons.

“India,” Zardari has said categorically, “is not our enemy.”

Pakistan’s Interior Minister Rehman Malik recently took many by surprise with his belated public acknowledgement that the Mumbai attacks of Nov. 2008 in which 180 people died were partly plotted in Pakistan. He also announced criminal proceedings against eight suspects, including three alleged ringleaders.

“I want to assure the international community, I want to assure all those who have been victims of terrorism, that we mean business,” said Malik said at a news conference on Feb. 12 in Islamabad, showing journalists a copy of Pakistan’s findings that were later handed over to India.

This was, as Indian journalist Siddharth Varadarajan wrote, “the first time the Pakistani state has ever publicly acknowledged that specific individuals and organisations based on its territory were actively involved in staging a terrorist attack on India” (‘Time for India to think of carrots too, not just sticks’, The Hindu, Feb. 13, 2009).

Pakistan’s admission appears to have confounded critics in India who had been certain that Pakistan would never admit to India’s allegations that the conspiracy was hatched in Pakistan or that the attackers were Pakistani nationals.

The admission “raised suspicion in New Delhi’s paranoid security establishment,” commented Sanjay Kapoor in the ‘Hardnew’s magazine, New Delhi, “The obvious questions that are being asked are: why did Pakistan do a volte-face and where will this new trajectory of their probe lead to?”

There is a widespread perception that Pakistan’s admission was due to pressure from Washington, which has repeatedly voiced concern that tensions between the two countries would distract Pakistan from the ‘war on terror’ against the Taliban and al-Qaeda.

Both Washington and New Delhi have welcomed the move. So have peace activists.

“They should have made this admission much earlier,” said Musarrat Hilali, a former (and first woman) additional advocate general of the North West Frontier Province (NWFP) that borders Pakistan’s tribal areas next to Afghanistan, and vice chairperson of the NWFP chapter of the independent Human Rights Commission of Pakistan.

“Everyone knew that the attackers came from Pakistan,” she added. “What was the point of denying it for so long? It would have built up confidence if they had said it earlier. Perhaps the rift between the two countries will decrease if Pakistan takes an honest stance to what is an international level problem, so that we stop being seen as liars around the world.”

Even so, the “dramatic reversal of Islamabad’s long-standing policy of denial and its significance ought not to be minimised in any way… The international political cost to the establishment of turning back from here has risen dramatically,” said Varadarajan, writing that this was possibly the main reason behind the delay in Pakistan’s admission.

The Indian government must now “resist the temptation to gloat or to pick quick holes in what the Pakistani investigation into Mumbai has revealed”, and it must take “a constructive approach” to sharing information and evidence, he urged.

Analysts hope that such information sharing can lead to the possibility of starting a joint-terror mechanism or reviving one that exists under the largely toothless South Asian Association for Regional Cooperation (SAARC).

Varadarajan wisely suggests communicating responses “directly to Pakistan rather than through piecemeal, or even misleading, leaks to the media” and an urgent “moratorium on hostile rhetoric and accusatory statements”.

However, nothing will really change as long as Pakistan continues to invest heavily in Afghanistan in a bid to develop what policy makers term as ‘strategic depth’ and counter the growing Indian influence across Pakistan’s western border, says lawyer Kamran Arif, speaking to IPS over the phone from Peshawar, capital of the North-West Frontier Province NWFP, where he is based.

“If Pakistan continues this policy, things will just continue as they are,” Arif said. “Afghanistan, India and Pakistan – it’s all linked.”

The United States includes itself in this loop, as special envoy to Pakistan and Afghanistan Richard Holbrooke acknowledged during his recent visit to India.

“For the first time in 60 years, your country, Pakistan and the U.S. all face an enemy (the Taliban) that poses direct threats to our leaderships, our capitals and our people,” Holbrooke told reporters in New Delhi after meeting with top-level Indian ministers.

Hilali and Arif were both among the high-profile 24-member delegation that recently visited India under the aegis of South Asians for Human Rights (SAHR), a non-government organization started, among others, by the prominent lawyer and HRCP Chairperson Asma Jahangir.

“Everyone we talked to agreed that war is not an option,” said Arif. “But there was great anger among ordinary people who saw continuous coverage of the Mumbai attacks on numerous television channels for three days straight. There was also anger about how the Pakistan government and some journalists handled matters.”

Arif noted two positive aspects. One was that in the state elections just after the Mumbai attacks, people did not vote for the right-wing parties which tried to whip up war hysteria.

Secondly, public anger was not directed against India’s sizeable Muslim minority (150 million) as has happened in previous cases of tension between India and Pakistan.

Pakistan and India have also maintained diplomatic ties – although the composite dialogue process remains on hold – despite pressure from the hawks.

Still, either due to disorganisation or reluctance to give Pakistan a face other than the stereotypes popularized in the media, the Indian media largely ignored the delegation, according to Jawed Naqvi, a senior Indian journalist who works as New Delhi-correspondent for the Pakistani daily Dawn.

Naqvi criticised the Indian media for its self-absorbed, blinkered view of Pakistan, “happy to show repeated looped shots of a mullah on a Pakistani channel ranting that India be destroyed, if necessary with nuclear weapons” (‘Peace activists are great folks, so why are we still in trouble?’, Dawn, Jan. 26, 2009).

The security establishments of both India and Pakistan rely on stereotypes about each other, reinforced through the school curricula, popular media and entertainment industries of both countries, to build up an image of ‘the enemy’ populated by ‘the other’ to buttress nationalism.

Peace activists in both countries reject these stereotypes at the risk of being labeled ‘traitors’ and ‘anti-national agents’.

Hilali told IPS that an Indian delegation is due to arrive in the near future in a bid to continue the “people to people links between the two countries, which is so important”.

Only two Indians attended the recently concluded Kara Film Festival in Karachi, the prominent director Mahesh Bhatt and the actor Nandita Das whose directorial debut ‘Firaaq’ (Separation) made its Pakistan premiere at the international festival.

Das, the only Indian on the flight to Karachi she took, told the audience that people were surprised she was making the trip. “It is when times are difficult that there is more of a need to speak out,” she said.