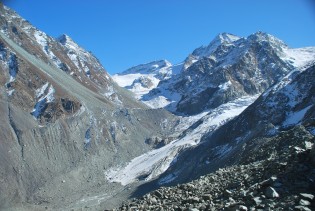 By Athar Parvaiz
As armed insurgency in India’s northern Jammu and Kashmir ebbs, the elected state government is keen to hasten a return to normalcy by easing draconian security laws and reopening movie theatres and liquor shops, banned by fundamentalist militant groups.

By Athar Parvaiz
A ruling by the International Court of Arbitration (ICA) at The Hague, staying construction of a dam across a river that flows into Pakistan, has brought cheer to the tribal people who live around the site.

By IPS Correspondents
The Pakistani public’s perceptions of the United States have hit their lowest levels since the 2002 invasion of Afghanistan, according to a new survey released here Tuesday by the Pew Global Attitudes Project (GAP).

By Ranjit Devraj
Osama bin Laden’s killing by U.S. troops, in a safe house adjacent to a Pakistani military academy in Abbottabad, may vindicate India’s charges that its neighbour is a haven for jihadist groups, but it will do little to change that reality.

By Athar Parvaiz
During the summer of 2010 Kashmir saw one of the worst face-offs between pro-freedom Kashmiri youth and law enforcement agencies. Smugglers used the unrest surrounding these outbreaks to conceal their steady ramping up of the black market timber trade, at times with complicity of authorities.

By Peter Custers
Russia’s President Dmitry Medvedev signed a large number of contracts with India during a two-day visit to New Delhi in December. These deals were part of a series of agreements that have placed India in progressively more advantageous positions in global arms markets.

By Athar Parvaiz
With threats looming large on the survival of several wildlife species in the Himalayan state of Jammu and Kashmir in northern India, experts warn that these species could go extinct in the coming years unless immediate steps are taken to prevent their extinction.

By Ranjit Devraj
The death sentence awarded to Pakistani national Mohammed Ajmal Kasab, 22, for his role in the 2008 terror attack on the western port city of Mumbai that killed 166 people is being seen as a setback to a campaign to have the extreme punishment abolished in India.

US: Increased Focus and Growing Pressure on Pakistan

By Jim Lobe
While President Barack Obama’s announcement last week that he will "surge" 30,000 more U.S. troops into Afghanistan has received all of the attention here over the past week, Pakistan appears to be looming larger than ever in Washington’s strategic calculations and concerns.

By Neeta Lal
"A bullet whizzed past us smashing the window to smithereens! My terrorised daughter slid under the nearest table. Everybody ran helter-skelter to save their lives. Just then three menacing-looking youths dressed in black exploded into the wedding hall, brandishing AK-47s. They started shooting indiscriminately, and soon our wedding venue was transformed into a battleground for dead bodies."

INDIA/PAKISTAN: A Fresh Approach to Peace

By Ranjit Devraj
If the leaders of India and Pakistan were looking for out-of-the-box solutions to their long-standing dispute over Kashmir and the related issue of cross-border terrorism, they could hardly have done better than the joint statement they released this week after their meeting at the Egyptian resort of Sharm el-Sheikh.

By Ranjit Devraj
It is hard to say whether U.S. Secretary of State Hillary Clinton will find herself being quizzed more on Washington's 'AfPak' strategy to contain global terror or her appeasement of a financially muscular China, when she lands in India mid-July.

By IPS Correspondents
The months following last year's Mumbai terror attacks have seen a renewed sense of urgency among peace activists in Pakistan and India. Citizens are pushing their governments to resume the composite dialogue process between the two nuclear-rival nations.

By Athar Parvaiz
The alleged rape and murder of two women by Indian troops in the remote Shopian district of Kashmir state has triggered renewed calls for demilitarisation of the Indian part of Kashmir, with street protests running for close to a month now.

By Ranjit Devraj
Indian Prime Minister Manmohan Singh’s participation in the Shanghai Cooperation Organisation (SCO) summit at Yekaterinburg Tuesday appears to have been motivated chiefly by the security environment in the region shaping up around Washington’s ‘AfPak’ policy.

By Athar Parvaiz
As political parties in Indian Kashmir debate the repeal of the Armed Forces Special Powers Act (AFSPA) in the insurgency-hit state, civil rights activists hope that this will fructify into a withdrawal of the sweeping powers given to armed forces in this state since 1990.

By Athar Parvaiz
Trade and travel between the Indian and Pakistan parts of Kashmir, as part of confidence building measures (CBMs) between the two rival countries, appear to have become a casualty of the Nov. 26-29 terror attacks on the port city of Mumbai.

INDIA/PAKISTAN: Signs of a Thaw

By Praful Bidwai
A week after Islamabad admitted that the plot to carry out the Nov. 26-29 attacks on Mumbai was partially planned in Pakistan, and that Pakistani nationals were among the assailants, there are tentative signs that the strained relations between the two neighbours may be thawing.

By Peter Dhondt
Almost three months after the terrorist attacks on India's commercial hub of Mumbai, which soured relations between India and Pakistan, the prospect for renewed cooperation between the nuclear-armed neighbours looks dim, two eminent analysts from the region conceded at a policy dialogue here.
Next Page »
ADVERTISEMENT ADVERTISEMENT