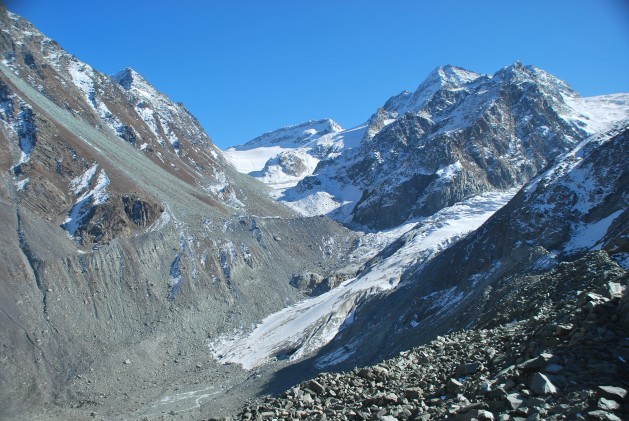 SRINAGAR, India, Aug 31 2012 (IPS) - Jowhar Ahmed, an air-conditioner dealer in Srinagar, is pleased at a spurt in business this summer caused by temperatures soaring over 35 degrees Celsius – unusual in this alpine valley ringed by snow-capped mountains.

“I sold more than 70 air-conditioners in just one month,” Ahmed, who runs the Oriental Sales electrical goods outlet, told IPS.  To cope with the demand Ahmed and other dealers have begun stocking air-conditioners in Srinagar rather than book orders for later delivery.

That the weather is warming over Kashmir is not news for climate scientists who have shown in several studies that the glaciers in the vast Hindu Kush-Karakoram-Himalaya (HKKH) region – called the world’s ‘third pole’ – are melting and receding at an increasing pace.

In the latest of these studies, European scientists led by Andreas Kaab of the department of geosciences, University of Oslo, have shown that glacial melt is worse in the Kashmir Himalayas than in other regions of the HKKH.

Kaab’s findings, published in the Aug. 23 edition of ‘Nature’, suggest that Kashmir’s glaciers may be receding by as much as half-a-metre annually, presenting an immediate threat to the rivers that  feed into the Indus basin.

“Glaciers are among the best indicators of terrestrial climate variability,” said Kaab in the study. “They contribute importantly to water resources in many mountainous regions and are a major contributor to global sea-level rise.”

Kaab said that while there is a paucity of glacier data in the HKKH region, there is “indirect evidence of a complex pattern of glacial responses” to climate change.

Prof. Shakil Romshoo, who teaches geology and geophysics at Kashmir University, says that studies that he and his colleagues conducted in 2009 showed that Kashmir’s glaciers were melting at an increasing pace.

“We have been saying for many years now that Kashmir’s glaciers are melting at an ever faster rate,” Romshoo told IPS. His team found that the Kolhai glacier, one of the largest in Kashmir, had shrunk to 11 sq km, losing two sq km over a period of 40 years.

Another scientific study on the Kashmir Himalayas had also shown that the snow cover over the region was on the decline. The study, led by glaciologist H. S. Negi, was published in the December 2009 issue of ‘Journal of Earth System Sciences’, a bi-monthly published in India.

Negi, who is attached to the Snow and Avalanche Study Establishment of India’s defence ministry, based his findings on 20 years of remote satellite-based climatic data, covering the period 1988 – 2008.

Experts in Kashmir say that the new findings by the European scientists are a concern since the rivers of the Indus basin are glacier-fed.

“Unlike in the Eastern Himalayas where rivers such as the Brahmaputra are mainly rain-fed, most of the water that goes into the Indus river comes from snowmelt, which includes glacial melt,” says Prof. Mohammad Sultan, who teaches geography in Kashmir University.

“This could cause huge problems for irrigation and generating power in northwestern India and Pakistan through which territories the rivers originating in Kashmir flow before ending up in the sea,” Sultan told IPS.

“The Indus water system is Pakistan’s lifeline as 75 to 80 percent of water received in this country comes from melting Himalayan glaciers,” says Irshad Muhammad Khan, executive director of the Global Change Impacts Studies Centre in Pakistan.

“Any disruption of water flow in the Indus would have grave implications for agriculture production in Pakistan,” Khan said.

The rate at which Himalayan glaciers are melting has been the subject of international controversy ever since the Intergovernmental Panel on Climate Change (IPCC) of the United Nations said, in its 2007 report, that they were melting so fast that they could vanish altogether by 2035.

After leading climate experts challenged the IPCC’s claim, the U.N. body’s Nobel prize-winning chairman, Rajendra Pachauri, was forced to admit publicly, in January 2010, that the projections had no scientific basis.

A study by scientists at the Universities of California and Potsdam, released in January 2011, showed that glaciers in the Karakoram range, in the northwestern part of the HKKH region, were actually advancing and that global warming was not the deciding factor in glacier melt.

Scientists are, however, agreed that changes in the size of glaciers in the HKKH directly affect Asia’s water resources and sea levels, though it has been difficult to accurately measure or monitor them.

‘An Inconvenient Truth’, a 2006 Oscar-winning documentary on former U.S. vice-president Al Gore’s campaign to create global warming had suggested that 40 percent of the world’s population depends on the snows and glaciers of the Himalayas for water supplies.