CLIMATE CHANGE: Snow Cover Turning to Lakes in the Himalayas

UXBRIDGE, Canada, May 7 2009 (IPS) - As climate change takes hold, even the mighty Himalayas and Hindu Kush mountain ranges are now losing their snow and ice. 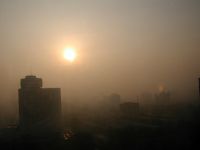 These are the world’s greatest repositories of snow and ice outside of the polar regions, and yet they may melt away in just 20 to 30 years, leaving more than a billion people desperately short of water, experts concluded in San Diego this week.

“There’s been a super-rapid decline in the glaciers of the region,” said Charles Kennel, senior strategist at the University of California San Diego Sustainability Solutions Institute and former director of Scripps Institution of Oceanography.

Kennel told IPS that nearly all of the 20,000 glaciers in the Himalaya-Hindu Kush mountain ranges are in retreat and the meltwater from some has created enormous lakes held back by rockslides that will inevitably burst, endangering anyone living in the valleys below. The World Wildlife Fund calculates there are 2,000 glacial lakes forming in Nepal and around 20 are in danger of bursting. Several have already flooded valleys in the past two decades in Nepal and Tibet.

“We are trying to make it known that the Himalayas are to the issue of the world’s water supply problem what the Amazon rain forest is to the issue of deforestation,” he said in reference to the “Ice, Snow, and Water” workshop convened at UC San Diego this week that included scientists from India, Nepal, Singapore and China.

The Himalayas–Hindu Kush and nearby mountains, along with the high-elevation Tibetan Plateau that spans 1.6 million square kilometers, are the water towers of Asia and feed its great rivers – the Yellow, Yangtze, Mekong, Salween, Indus, Ganges and Brahmaputra. Sometimes referred to as Earth’s “third pole”, the snow and ice in the region provide the largest river run-off from any single location in the world.

Data from the International Commission on Snow and Ice in Kathmandu, Nepal reveal that the Himalayan glaciers are shrinking faster than anywhere else and could totally disappear by 2035. Snowfall is also in sharp decline in much of the region, Kennel said. This region has been frozen for hundreds of thousands of years and the incredibly rapid meltdown is the result of three converging factors, he explained.

Like the Arctic, temperatures in this cold part of the world are climbing far more rapidly than elsewhere. Over the past three decades, the average temperature has increased by almost 1 degree Celsius, and Chinese climate scientists predict a further temperature rise of between 2.0 to 2.6 degrees Celsius by 2050. Some of this temperature rise is due to soot, otherwise known as black carbon, from burning fossil fuels – especially diesel and coal – as well as burning wood and other biomass.

Black carbon heats the region in two ways. The dark particles absorb heat from the sun and collect at mountain latitudes. Secondly, this soot coats the snow, turning it grey and reducing the snow’s albedo – ability to reflect sunlight – accelerating the melt, said Kennel.

A new study confirms that black carbon is responsible for much of the springtime snow and ice melt in Asia. “By inducing early retreat of snow cover, black carbon causes (Hindu-Kush-Himalaya-Tibetan Plateau) land areas to absorb more sunlight and warm disproportionately,” said Marc Flanner of the National Centre for Atmospheric Research in Boulder, Colorado said in a statement.

Scientists note that black carbon is also responsible for much of the rapid meltdown underway in the Arctic. Preventing emissions of black carbon through the use of cleaner burning fuels, higher temperatures or filters would provide immediate cooling benefits because soot only remains in the atmosphere for a few weeks.

Eliminating black carbon emissions from fossil and biofuel sources could mean the springtime snow cover in Asia would increase substantially, recovering perhaps 25 percent of what has been lost in the past 100 years, Flanner said.

The final, and perhaps most worrying factor for all of Asia is a documented shift in the annual monsoon season. “Experts here said the monsoon is declining in intensity and has become more variable,” said Kennel. The wettest part of India received no rain last year but a desert that had not seen rain in 50 years suddenly became wet. Overall, however there has been a decline in precipitation in the last 20 years, he said. And that also means less snow in the mountains.

All of this means there will be less and less water for the 1.3 billion people who rely on Asia’s water tower. “We know that this is coming, now the challenge is how to adapt,” he said.

The San Diego workshop focused precisely on that issue because California is facing an identical challenge – its own water towers, the Sierra Nevada mountains, are likely to be virtually free of snow and ice before the end of the century. This spring, only 60 percent of the normal snowpack remains in the mountains, forcing the state to ration water this summer with a significant impact on the region’s agricultural sector.

California is developing new water management plans to adapt, such as building new reservoirs. The 17 countries affected by the decline of Asia’s water towers need to do the same, said Kennel. While U.S. researchers share their techniques for studying the water supply from the Sierra Nevada, they acknowledged that their science cannot yet make forecasts or projections at local scales.

Decision makers and water authorities need to know what may happen in their region or watershed but science cannot provide that level of detail yet, Kennel said.

And then there is the large issue of water for natural ecosystems. Humans cannot use all the water or ecosystems that provide many vital services will collapse.

At the conclusion of the workshop, participants agreed to forge an international alliance on adaptation. That will require major investments in research and water management planning, but many Asian countries do not have the funds.

Last year, Bolivian President Evo Morales has called on developed countries to earmark one percent of their GDP to create an adaptation fund to mitigate climate change in poor and vulnerable nations.

“That would be a step forward,” agreed Kennel.

He also said that the workshop will present a formal declaration at the 2009 Forum on Science and Technology in Society in Kyoto, Japan, this October. It will say that, “Failure in any region will affect the whole world.”