SAN JOSÉ, May 16 2009 (IPS) - Government institutions and civil society organisations are holding talks, workshops and other activities aimed at raising awareness and overcoming intolerance, in preparation for the National Day Against Homophobia on Sunday in Costa Rica. 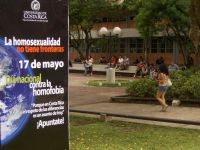 President Óscar Arias issued a decree in March 2008 declaring May 17 the national day of fighting discrimination against homosexuals, placing Costa Rica among 30 countries that have officially decided to mark such a day.

The decree states that public institutions must widely disseminate the goals of this commemoration, and must also "facilitate, promote and support activities aimed at the eradication of homophobia."

This step was taken as a result of a campaign by the Centre for Investigation and Promotion of Human Rights in Central America (CIPAC), one of whose members, Francisco Madrigal, spoke to IPS about the importance of the decree for encouraging the state to take part in the transformation of society.

In his view, "deeper awareness is needed as well as the institutionalisation of policies to respect a person's sexual orientation."

To further this task, several government institutions will carry out awareness-raising activities like talks for their employees, training events and round table discussions in various parts of the country. The rainbow flag of the homosexual rights movement will also be raised at their buildings.

The Supreme Electoral Tribunal, the Human Rights Ombudsman's Office and the Health Ministry are some of the government bodies involved.

The National University, the Institute of Technology and the University of Costa Rica (UCR) have been holding the First Inter-University Festival for Sexual Diversity since Wednesday.

Considerable progress has been made over the years in the fight against discrimination based on sexual orientation in this Central American country, but the leader of the Diversity Movement, Abelardo Araya, told IPS that, in spite of these efforts, homophobia still exists. But, Araya said, "it cannot be compared to how things were 20 years ago," when homosexuals were persecuted with "police raids and imprisonment."

In this activist's view, the pattern of homophobia nowadays is different, although some sectors are resistant to greater openness, and "it can be found at all levels of society."

For instance, the Catholic Church has already expressed its opposition to the draft law on civil unions between same-sex couples which is currently before parliament.

The statements by the church hierarchy surprised no one, but the position against the proposed law taken by the centre-left Access Without Exclusion Party (PASE) did, especially as it specifically called for the vote of the gay community in the last legislative elections.

PASE is now advocating a referendum to decide the issue of same-sex civil unions. The gay community is against the idea "because it is a matter of human rights," Araya said.

The Diversity Movement is putting the final touches to a document to be presented to the Supreme Electoral Tribunal, showing the amendments made to the draft law, as well as the conventions that Costa Rica has ratified which would preclude calling a referendum on issues that involve human rights.

Among these are the Universal Declaration of Human Rights and the Convention on the Elimination of All Forms of Discrimination against Women.

Sociologist Jacobo Schifter, one of the first well-known Costa Ricans to come out of the closet in 1988, told IPS that "homophobia has always existed and will continue to exist." In his view, 20 years ago gay people were completely invisible, but "AIDS made this community more visible."

A 1987 national AIDS survey "found that the most homophobic people were those who were least familiar with homosexuals," he said.

Schifter said that people are more open-minded in rural and marginalised areas, because they have a more communal social life. But changing the country's laws "is to import the U.S. model" and "is a stupid approach," he said.

He said that in Latin America, "it's easier to focus on changing people's social attitudes. Gay marriages won't make any difference to acceptance" of the gay community. He also said "no one pays any attention to what the Catholic Church says, so what does it matter what they say about people's sex lives?"

What needs to happen is social progress, Schifter said, "so that gays come out of the ghetto and take their place in every sector. And it should happen from the bottom up." In his view, the present strategy followed by the gay rights movement is a waste of time.

He said he was confident that LGBT (lesbian, gay, bisexual and transgender) caucuses would begin to emerge in the parties.

The Movement is also campaigning for "the vote for equality," that is, an "informed vote" within the community, where it is "calling on people not to vote for those who discriminate against us, like PASE," he said.