RELIGION-CUBA: Women in the Pulpit

HAVANA, Jun 22 2009 (IPS) - Izet Samá has no regrets about her decision to devote every waking hour to her mission as pastor of the Presbyterian-Reformed Church, guiding a small congregation in the Cuban province of Havana. 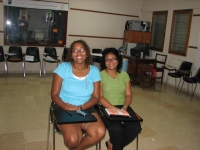 But being a young, black woman meant the challenge she had to face to become what she is today was threefold, breaking through many rules made by men and for men, Samá told IPS.

“As a woman, you have to constantly prove that you have the necessary skills and abilities, that you can do things well, that you have what it takes. It’s tough,” she said. At 35 years of age and with five years of experience in pastoral service, Samá is certain of having chosen the right path, despite all the setbacks and difficulties.

To her, the key is perseverance. “I never once gave up. There were times when I had to work simultaneously in three churches, under difficult conditions. But the more hurdles and obstacles thrown my way, the more strength I had to push forward,” she said.

“My ultimate goal was to work in a community and become a pastor,” she said. But it wasn’t as if she was without support along the way, as pastors and religious leaders helped her, she added.

When she was finally assigned a congregation, she found it ridden with problems and torn by internal strife. But now, she said, “all that has changed.”

Samá’s church is in Los Palos, a township located in the province of Havana but closer to neighbouring Matanzas (87 kilometres away) than to the country’s capital.

Among the main social problems affecting her congregation, Samá mentioned gender and domestic violence, and alcoholism.

“In this community many are unaware of their rights as citizens, so I work a lot with Cuba’s constitution and legislation to change that. Because one of my focus points is helping the members of the community become better citizens. The only way they can change a reality is if they have a solid knowledge of how things are,” she said.

The fact that she is a religious leader in a country like Cuba, with its single-party socialist system, and the machismo that persists in spite of the many laws passed and the progress made in terms of gender equality, has been a challenge for Samá.

“It has entailed risks, it’s meant investing a great deal of time, and it’s brought disappointment and frustrations,” she said.

But “we need pastors, we need to bring about change. We need to be in Cuba, with all that being here implies. There may be a lot of complications along the way, a lot of headaches and misunderstandings, but if you give up and drift off the path, the problems are just going to get worse.”

In 1992, religious freedom was bolstered in this Caribbean island nation of 11.2 million people through a constitutional amendment that explicitly recognised and guaranteed freedom of religion (as opposed to merely of conscience) and eliminated a clause that stipulated that it was illegal and liable to punishment to oppose one’s faith or religious beliefs to the revolution.

Two decades earlier, the 1976 constitution had officially established a Marxist-Leninist state, and while it recognised the right of all citizens to profess the religious faith of their choice, it was widely held that religious beliefs were in conflict with revolutionary ideals.

This greater religious openness that came in the 1990s revived the strong syncretism that had traditionally characterised the attitude of Cuban society towards faith, according to various experts on the subject.

Not only is a large percentage of the population Roman Catholic, but being baptised in the Church is also a prerequisite for the initiation rite of Santeria, a popular religion of African roots with a significant following in Cuba.

In addition to the Catholic Church, Cuba’s religious spectrum includes a wide range of Protestant churches, African-based faiths, Spiritism, and other denominations or forms of religion – such as Judaism and Voodoo – brought to the island by early waves of migration.

But the country’s political system or religious makeup have not been the greatest obstacles faced by Samá and many other women who aspire to leadership in their churches. The biggest challenge has been breaking deeply entrenched patriarchal mindsets.

To begin with, not all Protestant branches accept female pastors, just as the Catholic Church does not ordain women priests. In fact, a common denominator of the different faiths around the world has been that historically they have relegated women to secondary roles.

“In my case, I had to overcome a lot of obstacles when I started out just because I’m young and have a different view of what a pastor’s role should be; because the model we’re trying to implement is questioned,” Samá said.

“Our contribution is not taken into account, because all they see is that we don’t conform to the traditional mould into which pastors have been pigeonholed,” she explained.

Samá chose to apply the “popular education” methodology to her pastoral work, interacting with the community and making the members of her congregation understand that everyone has something to contribute and that everyone can participate – a formula that “requires complete devotion,” she said.

“There are also many colleagues who don’t accept us, who see us as the enemy, as someone who’s coming to the church to take their place,” she said.

“It’s a question of power, of not relinquishing any decision-making spaces. While all we want to do is share our experiences,” Samá concluded.

Despite the hurdles, in 2007 Cuba’s Episcopal Church ordained its first female bishop, Nerva Cott, and in recent years, a woman, reverend Rodhe González of the Christian Pentecostal Church, has presided the Cuban Council of Churches.

Another notable case is that of Ofelia Ortega, a pastor of the Presbyterian-Reformed Church who serves as Latin American and Caribbean president in the World Council of Churches, among other positions she has held.

Like any new actors in society, women are demanding a more decisive role and will not sit by idly while patriarchal structures block their way, regardless of the difficulties they have to face. “Nobody gives up power willingly; you have to fight for it,” Cuban anthropologist and historian María Ileana Faguaga told IPS.

“Churches are part of society; they reflect the tensions and readjustments played out in every social scenario, including sexist and sexual ones, racial ones, as well as the transformations that are affecting the unit traditionally known as family,” the expert added.

Interviewed by IPS, academic researcher Enrique López Oliva, secretary of the Cuban chapter of the Committee for Studies on the History of the Church in Latin America (Cehila-Cuba), explained that this process of inclusion of women in leading roles in Protestant Christian churches began gradually in the 1960s.

That was in the early years following the 1959 Cuban Revolution, at a time of great tension with the United States. As many pastors chose to leave the country, their responsibilities began to be assumed by the women who stayed back in the communities. “These were special circumstances for the churches,” López Oliva said.

Later women began to be included in theology courses. Many of these women are now teaching at the Matanzas Evangelical Seminar, and it’s not unusual to find them leading congregations. “This process picked up pace in the last 20 years,” the researcher said.

Looking back over the years since women were first accepted into the “full ministry,” bishop Cott admits to a “certain frustration” because women are still a very small minority. “Men are still chosen over women for positions of power and authority,” she wrote in an article on the situation of women in Protestant churches.

Cott argued that when it comes to occupying, electing, appointing or filling high-ranking positions, decisions are still influenced by a machista mentality that persists among both men and women. Ordained men are judged less severely than ordained women, regardless of how competent they may be, she said.

In today’s Cuba, with the greater religious freedom guaranteed by the constitution, there are 27 churches and 12 ecumenical groups that are members of the Cuban Council of Churches, representing a significant portion of all Protestant believers.

There are also about 60 with official recognition but which are not members of the Council, and some 100 groups, mostly very small, which are not officially registered.

Most Protestant churches maintain what are considered stable and cordial relations with the Cuban government, and some of their pastors and leading figures have even been elected several times to the legislature.

The Catholic Church has also seen “a general improvement in its relationship” with the state over the last decade, cardinal Jaime Ortega acknowledged recently. The improvement, he explained, is not just institutional, but extends to the situation of Christians in general and of Catholics in particular.