HAITI: "We Have Never Had Justice" 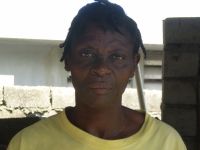 "They killed my boy and burned my boy," says Jean-Baptiste, a careworn 49-year-old who lives in a dilapidated structure without running water in this bustling port town 80 kilometres north of Haiti's capital, Port-au-Prince. "And I am still suffering."

It was February 2004, and Haiti was in the midst of a chaotic rebellion against the government of President Jean-Bertrand Aristide. North of St. Marc, a formerly loyal street gang known as the Cannibal Army had risen up against the president and, joined by former members of the country's disbanded army, proceeded to overrun police barracks and seize control of towns throughout northern Haiti.

On Feb. 7, a lightly-armed anti-Aristide group, the Rassemblement des militants conséquents de Saint-Marc (Ramicos), based in the neighbourhood of La Scierie where Amazil Jean-Baptiste lived, took advantage of the chaos to drive government forces from the town, seizing the local police station, which they then set on fire.

What would follow would raise questions about Haiti's ability to give justice to victims and punish the guilty that persist to this day.

As Amazil Jean-Baptiste returned home, she found her son, Kenol St. Gilles, a 23-year-old carpenter with no political affiliation, groaning with a bullet in each thigh. Taking him to the home of a local pastor for aid, she watched as seven armed men, including three dressed in police uniforms, accused St. Gilles of being a Ramicos militant who had shot at them. He was dragged from the house, beaten unconscious and thrown into a burning cement depot, where he died.

Residents of the town tell of other crimes – the decapitation of unarmed Ramicos member Leroy Joseph, the killing of Ramicos second-in-command Nixon François, the gang rape by Bale Wouze members of a 21-year-old woman in the ruins of the burned-out commissariat – that were allegedly committed during or immediately following the recapture of St. Marc by pro-Aristide forces.

Witnesses recount how several people were slain and tossed into the burning remnants of the Ramicos headquarters, while still others were gunned down by police firing from a helicopter as they tried to flee over a nearby mountain, Morne Calvaire.

"They came here and they massacred people," says resident Marc Ariel Narcisse, 44. "A grenade thrown into my mother's house exploded, and the house caught fire. My cousin, Bob Narcisse, was killed there."

Following those dark days, the victims of the St. Marc killings formed the Association des Victimes du Génocide de la Scierie (AVIGES) to advocate on their behalf. But their struggle has exposed the highly politicised and often unresponsive nature of justice in Haiti, a country struggling to build democratic institutions after decades of dictatorship.

Links between armed pressure groups and the spheres of official power have long been a fact of political life here.

Faustin Soulouque, who crowned himself emperor of Haiti in 1852, was supported by groups of impoverished partisans called zinglins, while the Duvalier family dictatorship that ruled from 1957 until 1986 utilised the Tontons Macoutes, a murderous paramilitary band named after a traditional Haitian boogeyman.

The government of Aristide, who returned to office in 2001 after ruling the country for two periods in the 1990s, allied itself with his own armed partisans, often referred to as chimere after a mythical fire-breathing demon.

Of these latter groups, Bale Wouze had a reputation as one of the fiercest, and, by February 2004, its links with Haiti's National Palace were largely indisputable, especially given the presence in St. Marc of the USGPN, a unit directly responsible for the president's personal security.

On Feb. 9, as St. Marc was retaken by government forces, and as security forces and Bale Wouze members patrolled its streets together, Aristide's prime minister, Yvon Neptune, also serving as the head of the Conseil Superieur de la Police Nationale d'Haiti, flew into the city, giving a press conference during which he stated that "the national police force alone cannot re-establish order".

Witnesses in La Scierie describe how one of Bale Wouze's leading members, a government employee named Ronald Dauphin, known to residents as "Black Ronald", patrolled St. Marc in a police uniform, even though he was in no way affiliated with the police.

When the author of this article visited St. Marc in February 2004, shortly after Bale Wouze's raid into La Scierie, he interviewed USGPN personnel and Bale Wouze members patrolling the city as a single armed unit in tandem the PNH. A local priest told IPS matter-of-factly at the time of Bale Wouze that, "These people don't make arrests, they kill."

Interviewed by the Miami Herald in St. Marc in February 2004, Amanus Mayette was surrounded by Bale Wouze members and proclaimed his affiliation with the organisation.

"Amanus Mayette, Black Ronald, Somoza, these people killed my son," Amazil Jean-Baptiste explains in a trembling voice, listing the names of some of those who she says took part in her son's slaying.

Following Aristide's overthrow later that month, several members of Bale Wouze were lynched as they tried to flee St. Marc, while Yvon Neptune turned himself over to the interim government that ruled Haiti from March 2004 until the inauguration of President René Préval in May 2006.

Held in prison without trial until his May 2006 release on humanitarian grounds, a May 2008 decision by the Inter-American Court of Human Rights found the Haitian state had violated 11 separate provisions of the American Convention on Human Rights in its detention of Neptune, though stressing that it was "not a criminal court in which the criminal responsibility of an individual can be examined".

After being jailed for three years without trial, former Bale Wouze leader Amanus Mayette was freed from prison in April 2007. Arrested in 2004, Ronald Dauphin subsequently escaped from jail, and was re-arrested during the course of an anti-kidnapping raid in Haiti's capital in July 2006. Despite several chaotic public hearings, to date, none of the accused for the killings in La Scierie has ever gone to trial.

"In our system, the criminal becomes a victim because the system doesn't work," laments Pierre Espérance, director of the Réseau National de Défense des Droits Humains (RNDDH), which has pushed for criminal prosecutions in the La Scierie case.

Espérance himself survived a 1999 assassination attempt for which no one was ever prosecuted.

"But historically, the authorities here are so involved in corruption and human rights violations they feel very comfortable with impunity," he says.

According to RNDDH figures, nearly 81 percent of Haiti's prisoners are waiting for their cases to be heard before a judge, a situation that some hope may be improved by the re-opening of Haiti's school for magistrates, which recently renewed activities after being shuttered for many years.

Frustratingly for the people of St. Marc, however, the events of February 2004 have become a political football among Haiti's various political actors.

The United Nations independent expert on human rights in Haiti, Louis Joinet, in a 2005 statement dismissed allegations of a massacre and described what occurred as "a clash", a characterisation that seemed unaware of the fact that not all among those victimised had any affiliation with Haiti's political opposition.

Conversely, a member of a Human Rights Watch delegation that visited St. Marc a month after the killings concluded that at least 27 people had been murdered by pro-government forces between Feb. 11 and Aristide's flight into exile.

Their claims are treated with shrugging indifference by the Préval government and the United Nations, and the people of La Scierie appear to be resigned that their struggle for justice will be a long, though hopefully not fruitless, one.

"We need justice, we demand justice, because we have never had justice," says Amazil Jean-Baptiste, as another member of AVIGES stands nearby, wearing a t-shirt reading 'We won't forget 11 February 2004' in Haiti's native Kreyol language.

"I just want justice for my son," she says.