MEDIA: The Untold Stories of Violence Against Women

ROME, Nov 26 2009 (IPS) - “You don’t need to go far, it is all around us,” said Robert Dijksterhuis, head of the gender division in the Dutch Ministry of Foreign Affairs, to a room mostly full of women. “Up to one in three women around the world has been abused in some way – most often by someone she knows,” he added, quoting UNFPA (United Nations Population Fund) numbers. 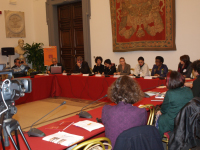 The audience, a group of committed women – and men -, had gathered in Rome to discuss this widespread emergency and the role media have in relation to it in a conference organised by the IPS news agency and supported by the Italian Ministry of Foreign Affairs and the city of Rome.

The U.N. Development Fund for Women (UNIFEM) reports in the paper “Violence against women worldwide” that up to 70 percent of women experience physical or sexual violence from men in their lifetime – the majority from husbands, partners or someone they know. Among women aged 15–44, acts of violence cause more death and disability than cancer, malaria, traffic accidents and war combined.

And violence against women is pervasive.

In South Africa, a woman is killed every six hours by someone she knows; in Guatemala, two women are murdered, on average, each day. In São Paulo, Brazil, a woman is assaulted every 15 seconds. Rape of women is widespread in armed conflicts such as those of Colombia and Darfur, Sudan.

During the conference, IPS launched the handbook "Reporting Gender-Based Violence".

"Violence against women has presented particular challenges to the media and to society because of the way in which it has been consigned to the private sphere -dampening public discussions and stifling media debate. Yet, the media has the potential to play a lead role in changing perceptions that, in turn, can help galvanise a movement for change," says the introduction by IPS Africa Director Paula Fray.

The handbook deals with issues such as religious and harmful traditional practices, domestic violence, sexual gender-based violence, femicide, sex work and trafficking, sexual harassment, armed conflicts, HIV and AIDS, child abuse, the role of men, the criminal justice system, and the costs of gender-based violence, with real stories illustrating how these issues and trends can be tackled by the media, discussion points, fact checks and additional resources.


This phenomenon affects not only developing countries, but also the developed world. In the U.S., 83 percent of girls aged 12–16 experienced some form of sexual harassment in public schools, and one-third of women murdered each year are killed by partners; in the European Union between 40 and 50 percent of women experience unwanted sexual advancements, physical contact or other forms of sexual harassment at their workplace.

However, according to UNFPA, civil society, media and politicians have begun only recently to join their efforts to change the perception of the phenomenon of violence against women, trying to knock down the wall of indifference and misconstruction that has always surrounded it.

And this is where the media comes in.

According to the Italian Undersecretary of Foreign Affairs Vincenzo Scotti, “communication can be one of the most powerful tools” in the fight against this type of violence.

In “Changing cultural and social norms that support violence”, the World Health Organisation (WHO) confirms that media – which have been successful in addressing a wide range of health issues – could play a bigger role in fighting violence.

Meanwhile papers like “The influence of media violence on youth”, published by the American Physiological Society, show how female victimisation in storylines reduces the perceptions of violence in the reality.

This problem is exacerbated by the under-representation of women in media and misrepresentation of their role. Media Monitoring Africa – a watchdog organisation that promotes fair journalism – denounces the scarcity of women working in the media and the marginalised way in which they are portrayed, often limited to victims or someone’s relative.

“The influence of women in journalism is one of the most central problem areas in feminist media research,” acknowledges a report entitled “The Gender of Journalism”, authored by Monika Djerf-Pierre.

Djerf-Pierre’s study shows that even in a female-friendly nation such as Sweden, “journalism as a field has remained male-dominated.” (Sweden ranks number four in the Global Gender Gap [GGG] published by the World Economic Forum.) Today, almost half of Swedish journalists are women, the study shows. However, three out of four leaders in the media industry are men. In other countries the situation is worse.

According to Dijksterhuis, some of the ways communication can be used in a changing landscape with new technologies are trying to set the agenda; forging stronger linkages with NGOs, media and other actors (an issue that was highlighted by many speakers in this conference); and monitoring the results, since “most information is biased towards men.”

Communications rights should be part of these efforts, said Jac SM Kee, coordinator of Women’s Rights Advocacy in the Association for Progressive Communications. Her organisation is involved in an effort to “reclaim ICTs” (Information Communication Technologies) to end violence and address the intersections between communication rights and women’s human rights, especially in relation to violence against women.

Meanwhile, Mona Azzalini, of the Global Media Monitoring Project in Italy, talked about the biggest global survey about women’s participation in the media, to be released in 2010.

The initiative “promotes a change in the way women are portrayed” and creates a “network of advocacy groups” fighting discrimination and stereotypes in the media. The last monitoring – done in 2005 – was focused on four issues: the representation of women as subjects of information, the journalists, the content of the news including cases of stereotypes and discrimination, and journalistic practices.

The results of the 2010 survey will be compared with the 2005 report, which showed that only 21 percent of the sources are women, and most experts quoted (83 percent) are men. The point of view of women is nowhere to be seen: in politics only 14 percent of the sources were women; while in economic issues, 20 percent were women. Even when the issue is violence against women, most of the voices (64 percent) are men’s.

And how do media talk about these issues?

“Victim means weakness; weakness means violence… Media love violence,” said Laila Al Shaikhli, anchorwoman of Al Jazeera, who spoke about the difficulty of getting the real story, when women are reluctant to speak out and carry on a social stigma, when they themselves participate in the cycle of discrimination, educating children with the same paradigms.

The result is that the image of women comes out distorted.

In Italy, for example, “80 percent of people form their opinions based on TV,” said Emma Bonino, vice president of the Italian Senate. “And I am not satisfied with how women’s images are transmitted in our media. It is a humiliating image… Working women do not exist. The role of media is an important part of whichever strategy you want in place when fighting against violence. It is not marginal or complementary, it is essential to forming the idea of women.”

In Italy, Prime Minister Silvio Berlusconi controls about 90 percent of the TV audience through his private media empire Mediaset and the state television RAI.

Thenjiwe Mtintso, South Africa’s ambassador to Italy, spoke from the point of view of a gender activist and a former journalist during apartheid about the definition of what is news and its ownership, and who transmits it. Not women, she said. And this is something that has to change if violence against women is to end.