KIGALI, Feb 13 2010 (IPS) - Eighteen-year-old David Kimenyi* is sure he infected his girlfriend with HIV. They had unprotected sex many times, even after he discovered he was HIV-positive. 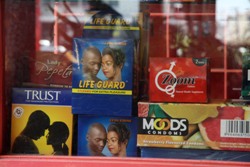 “I am afraid that I would have infected my girlfriend with HIV/AIDS,” he said.

“We used to enjoy a good time together and we trusted each other to have unprotected sex,” Kimenyi said of the girlfriend he began dating in 2008, not long after he went for an HIV test.

“After several times (of) having unprotected sex, I decided to tell her that I had AIDS,” Kimenyi said.

That was six months ago. Kimenyi’s girlfriend has left him since then.

In Rwanda, the HIV prevalence rate is estimated to be 3.1 percent according to the government’s 2008 Demographic and Health Survey.

But health officials are concerned that not enough is being done to contain the pandemic among teenagers.

A country-wide programme involving various stakeholders has been launched to tackle the rate of infection and increasing risky sexual behaviour among teenagers, officials from the National AIDS Control Commission (CNLS) said this week.

According to the results of a CNLS behavioural survey conducted in 2000, only 10 percent of the country’s sexually active youth use condoms.

“If teenagers are eager to have sex outside of their marital status, it is also important to educate them about how to reduce the risk of being infected with HIV,” Dr. Anitha Asimwe, the executive secretary of CNLS said.

Asimwe told local media that HIV infections in the country currently stand at one percent among youth aged between 15-24 years.

“In most cases, these teenagers don’t sometimes feel concerned to go for voluntary testing. The most discouraging issue is that most parents don’t want to talk to their children about sex, relationships and other related facts,” Asimwe said.

Kimenyi explained he had only gone for testing after contracting STDs.

“I decided to go for the test voluntarily because of certain diseases that I started to suffer from, particularly shingles, skin diseases and pneumonia,” Kimenyi said.

At Nakumatt, one of the main supermarkets in the Rwandan capital, Kigali, around 100 young people, mostly teenagers, come to enjoy a light moment. They share drinks, sitting around several plastic tables in the main entrance hall. They sit close together, close enough so that they can touch one another.

This was one of Kimenyi’s hangouts. Most of the young boys and girls frequenting public places like the new supermarket in Kigali are interested in having a good time.

And if a girl and boy meet, like each other, and end up going home with each other afterwards, there is a high possibility they will have unprotected sex.

Official figures from government state the the lowest prevalence of HIV, at 0.5 percent, is among teenagers aged between 15-19 years. But Bonaventure Ntagengwa, the coordinator of a youth centre for reproductive health based in Kigali, observes that most teenagers appear to have lost their fear of the disease.

Many teenagers, like Kimenyi, also find it difficult to ask their sexual partners if they have been tested for HIV, or to even discuss their own status, health officials say.

Kimenyi admits he never told his girlfriend his status because he was trying to ‘ignore’ it.

“Raising the issue of (your) HIV status sometimes contribute(s) to (a) breakdown in mutual confidence and friendship,” Kimenyi told IPS. Though in his case, it did not.

Dr. Agnes Binagwaho, the permanent secretary in the Rwandan ministry of health, said emphasis should also be placed on several other campaigns such as male circumcision – which could contribute to reducing the rate of HIV infection especially among the youth.

“Rwandan youth must be free to make choices to reduce HIV/AIDS and they deserve to be in a community where safety is real,” Binagwaho said.

Asimwe said teenagers needed to be sufficiently educated about HIV to reduce their risk of contracting the virus.

“Teenagers are the first target of HIV/AIDS because of insufficient sensitisation campaigns, thus (there is) a growing risk (of infection among teenagers) if no appropriate measures to reduce the rate transmission are taken,” Asimwe said.