EGYPT: Looking Away From the Disabled

CAIRO, Apr 7 2010 (IPS) - Egyptians find it hard to see past Mahrousa Salem’s wheelchair, so they look away. 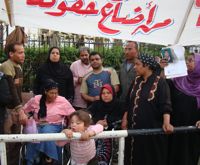 Protest in Cairo to demand rights for the disabled. Credit: Cam McGrath

The veiled Egyptian woman is one of more than a million Egyptians with physical or mental disabilities living in the shadows of society. They are excluded from the education system, overlooked by employers, and invisible to city planners.

“We’re not beggars and we don’t want people’s pity,” says Salem. “We just want the basic rights for which we are entitled.”

A 2006 census found that nearly a million Egyptians have some form of disability, though some experts estimate that the number is closer to eight million, or 10 percent of the population. Of these, nearly half have conditions that require some sort of intervention.

One reason that accurate figures are hard to come by is that families are reluctant to disclose information about disabled members of their household.

“Many Egyptian families hide their disabled children so that even their neighbours are not aware of them,” says Hanaa Helmy, regional coordinator of MOVE Middle East, a NGO that works to improve the mobility of children with severe disabilities.

Parents often worry about the impact their child’s disabilities will have on the other siblings, Helmy explains. “They think, for example, that their daughter is 14 and after a few years a man will come to propose. But she might never get married if the groom’s family finds out that her brother has a mental or physical disability.”

There is also a prevalent belief among Egyptians that disabilities such as blindness, cerebral palsy and Down syndrome are a form of divine punishment. Folk tradition holds that malevolent jinn (spirits) inflict these maladies on sinners.

“People believe that jinn touch people to give them physical or mental disabilities, or touch pregnant women so that their children will be born with them,” says Helmy.

These widespread social attitudes marginalise people who are physically or mentally different from the majority. The stigma leads to stereotypes and discrimination that prevent disabled Egyptians from participating in their community.

“When we try to integrate people with disabilities into society we find that all the doors are closed,” Helmy told IPS.

“Even what are essentially normal children with minor disabilities don’t pass the interview or entry exam and are rejected,” says Helmy. “Parents try, but eventually give up because it is too exhaustive and costly to get their child enrolled.”

For disabled children fortunate enough to get in, the additional expenses for transport, tutorial and teaching aids can quickly bankrupt a family. Even state schools for special needs children may require that the parents hire a shadow teacher – a cost few families can afford.

Career pathways are further obstructed by the reluctance of employers to hire people with disabilities, as Marzouk Abdel Rady can attest. The 36-year-old academic has a degree in education and teaching certificates from several accredited institutions, yet has been unable to land a teaching position. He says the tone of a job interview changes abruptly once a potential employer sees that he walks with a leg brace and cane.

“The schools refuse to hire me even if I’m better qualified than the other candidates,” he says. “They don’t say it’s because of my legs, but I can see it in their eyes.”

The Rehabilitation of Disabled Persons Act stipulates that government institutions and public and private sector organisations with 50 or more employees must ensure that individuals with disabilities comprise at least five percent of their workforce. Weak enforcement and negligible fines – just 20 dollars per employee below quota – have resulted in low compliance.

Firms that hire disabled workers often to do so to qualify for a tax break. The companies pay the lowest possible salary, around 35 dollars a month, and order the handicapped employee to stay at home.

The practice is being fought by Wayana International Foundation for Integration and Awareness, a local NGO working to secure equitable employment for disabled men and women.

“We don’t want just any job for them,” says Abeer Eslam, a spokesman for the organisation. “We want people with disabilities to work and feel they are participating productively in society.”

Wayana’s staff, mostly comprised of parents of children with disabilities, approach senior executives of private corporations to persuade them to provide suitable jobs and accessible facilities for the disabled.

“A number of companies have been willing to accept this, but it doesn’t compare to the number of firms that would rather just pay the small fine for failing to make the five percent quota,” Eslam says.

The social barriers that society erects are accompanied by physical obstacles to mobility. Roads, buildings and transport systems are constructed without any thought given to disabled access.

“It’s difficult for normal people to use the sidewalks or public transport in Egypt, so imagine what it is like for those with physical disabilities,” says Eslam.