BANGKOK, May 20 2010 (IPS) - As big a story as this week’s crackdown on anti-government protests in Thailand is the significant number of journalists killed or hurt, and media professionals and organisations threatened during the country’s most serious political conflict in years. 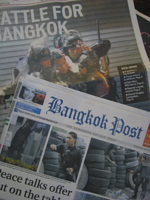 Conflict reporting in Thailand comes with a very high price as two journalists and many more were injured in recent weeks. Credit: Lynette Lee Corporal/IPS

Since April, two foreign journalists, a Japanese and an Italian, have died from bullet wounds while covering operations against the protests by the United Front for Democracy against Dictatorship (UDD), whose supporters are called red shirts because of their protest colour.

Italian freelance journalist Fabio Polenghi was shot by unidentified gunmen on Wednesday, during a blockade to end the two-month old UDD rally in the Rajprasong commercial district. Reuters cameraman Hiroyuki Muramoto died during an Apr. 10 attempt to break up protesters at another protest site.

But in addition to the usual risks that come with reporting in conflict situations, journalists and media organisations found themselves walking a tightrope of a mix of censorship, accusations of bias, as well as bomb attacks.

This has kept media rights groups busy, issuing statements that they are not combatants in the conflict and that both the government and the UDD must let them to do their job.

“We condemn the intimidation of the media and being the target of the red shirts yesterday at the height of the crackdown,” Thai Journalists Association (TJA) vice president Chavarong Limpattamapanee said in a phone interview.

“We are asking the government to stabilise the situation and do whatever they can to protect the members of the media as well as media offices,” he said, referring to the arson attacks by angry red shirts on Thai television Channel 3 Wednesday. The offices of the English-language dailies ‘Bangkok Post’ as well as ‘The Nation’ were forced to close down in the afternoon that day after receiving threats.

For two days, government spokesman Panithan Wattanagorn has referred to the worrisome deaths and targeting of foreign journalists – events that grabbed international headlines.

“The government of Thailand is committed to make sure that foreigners, guests of the country will be safe and secure, increase protection for embassies, tourist locations and especially for foreign media that may be targeted in this violent acts,” he said on television Thursday.

A Canadian freelance reporter, a Dutch journalist, and a U.S. documentary filmmaker were also injured Wednesday. On May 14, during clashes between protesters and soldiers, a French cameraman and two photographers from the Thai-language daily ‘Matichon’ and ‘The Nation’ were injured.

There have also been increased tensions between journalists and red shirts who accuse the media of misinformation. The ‘Bangkok Post’ reported that red shirts threatened a journalist doing interviews among them for fear that the information would be used to undermine the protests. In March, the government television station was the target of a grenade attack.

These reflect the deep split in views about the UDD protests, which had focused on demanding a new election to replace the government of Prime Minister Abhisit Vejjajiva.

According to Thai journalist Noi Thammasathien of the U.S. media training network Internews, the Thai mainstream media have been split into the ‘yellow’ and the ‘red’ camps, the former being associated with pro- government groups and the latter with the UDD.

“The media have been under tremendous pressure, especially from the government, the military and their supporters. So observers say media content has not been satisfying for other sectors, like the red shirts, because they believe that self-censorship is at work here,” said Noi.

Often, rights advocate Dewi Ratnawulan says, media from both the government and opposition have become instruments of agitation and discord. This has eroded their credibility, “perhaps one of the reasons why media organisations have been the target of attacks.”

“Apart from the obvious bias of reporting in the mainstream media identified with the government, the red shirts’ media are also guilty of the same with information meant to fuel an already tense situation within the rally site,” said Ratnawulan of the regional human rights organisation Forum- Asia.

But “there is no government interference in the print media,” TJA’s Chavarong said, despite the state of emergency. Television stations, he added, were asked in a meeting with the government to cooperate with them in the light of the emergency. “There were no written orders but merely suggestions on how to cover the crisis situation,” he explained.

Violence, including arson attacks that gutted more than 35 buildings, erupted hours after UDD leaders surrendered as troops closed in on the Rajprasong site on Wednesday.

The protesters had been camped out there since Apr. 3, demanding a new poll because they say the current government came to power not through elections but with the military’s aid. The UDD has as its patron fugitive ex- Prime Minister Thaksin Shinawatra, who is popular among the rural poor.

As of Thursday, officials said 44 people had died and 384 injured since May 14 when troops started mobilising troops in preparation for a dispersal.

The foreign media, Noi observes, have been more like a “helper” in the news situation in that many, especially the red shirts, look at them as those “who could give balanced information” if only because they are ‘outsiders’.

Lamenting the foreign journalists’ deaths, Chavarong said that some might have had the tendency to underestimate the Thai situation and been “too confident owing to their training on conflict reporting”.

“The Thai reporters don’t have that same kind of conflict reporting training and so tend to be on the safer side. What they usually do is to follow the instructions of officers. This is why in the Apr. 10 clashes, no local journalists were wounded,” Chavarong explained.

But in recent days that saw the involvement of unidentified snipers, the situation became harder to navigate.

“We didn’t know where the bullets were coming from. The main problem is that this was not a normal peaceful demonstration. And on the final day of the crackdown, we got word that red shirts planned to target all journalists on the ground and threaten them with bodily harm,” said Chavarong.

*The Asia Media Forum (http://www.theasiamediaforum.org) is a space for journalists to share insights on issues related to the media and their profession. It is coordinated by IPS Asia-Pacific.