NEW YORK, Jun 21 2010 (IPS) - Ephese speaks rapidly, her hands sweeping the air around her for emphasis. Peach-tipped fingernails come to rest momentarily on her peach-coloured skirt as she leans forward, eyes intent behind wire-rimmed glasses. Her French is direct; her words uncompromising. 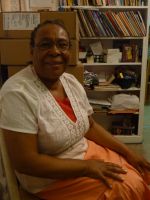 Ephese, a Haitian immigrant, says she earned as little as 75 dollars for three full days of work. Credit: Hannah Rubenstein/IPS

“When I had to go to work,” she says, “I had tears in my eyes.” Ephese has lived in the U.S .for the past 10 years, in which time she has been employed as a domestic worker in a series of jobs. Ephese left her native Port-au-Prince with her husband to pursue what she believed would be a better life than the impoverished island of Haiti could offer. After working as a domestic worker for a decade, she regrets the decision.

Ephese’s first job as a domestic worker was babysitting children who lived in her apartment building in New York City’s borough of Brooklyn. She was severely underpaid and overworked, earning as little as 75 dollars for three full days of work. She later found work as a home health aide, where she was required by her employer to work eight-hour shifts without a break in a scorching apartment.

Currently, Ephese cares for three children – two special- needs four-year-old twins and a 10-year-old – and is not permitted to take any time off of work, even to visit a doctor when ill.

On Jun. 1, New York became the first U.S. state to approve a Domestic Workers Bill of Rights. With a vote of 33-28, the state senate passed a measure guaranteeing basic work standards and protections: overtime pay; weekly time off; vacation, holiday, and sick days; protection from discrimination; and severance pay – benefits taken for granted by most workers in the United States.

The New York State Assembly passed a similar measure last year; once the bills are reconciled, Governor David Paterson has agreed to sign the measure into law.

The passage of the Domestic Workers Bill of Rights is the culmination of years of campaigning by workers’ rights activists.

Following the first U.S. Social Forum in June 2007, the New York-based organisation Domestic Workers United (DWU) joined with 13 other worker organisations to form the National Domestic Workers Alliance (NDWA). The NDWA is currently actively pursuing legislation at state, national, and international levels. The organisation hopes that by instituting workplace protections, the abuse and exploitation of domestic workers will finally come to an end.

The extent of domestic worker exploitation has traditionally been difficult to gauge, due to the private nature of the work. However, the most recent data, drawn from a 2006 DWU survey entitled “Home is Where the Work Is”, shows that over half of the 500 workers surveyed earned low wages, and 26 percent earned wages below the federal poverty line.

In addition, 67 percent of respondents were not provided with overtime pay and only one in 10 received health insurance. Sixty percent of the workers are their families’ primary income-earners.

These abysmal conditions disproportionately affect immigrant women of color: 99 percent of domestic workers are foreign- born, 95 percent are of colour, and 93 percent are women.

Workers rights activists believe that exploitation of domestic workers is ingrained in American culture; in order to improve working conditions, the industry as a whole must be re-imagined.

Ninaj Raoul, executive director of the non-profit organisation Haitian Women for Haitian Refugees, explains that “society has been conditioned to think that a domestic worker is not a real worker and that domestic work is not real work.”

She says that the institution, tantamount to “modern-day slavery”, stems from employer attitudes towards domestic workers. “They don’t see you as a human being,” she says. “They see you as an immigrant that should just be happy that you have a job.”

Jill Shenker, the lead organiser of the National Domestic Workers Alliance, echoes this sentiment. “We want domestic work to be recognised as work,” she says. “It’s undervalued and unrecognised both socially and politically, and that has an incredible impact on people’s everyday lives.”

Many activists view the legislators themselves as one of the largest obstacles to obtaining domestic worker rights. Linda Oalican, programme coordinator for the Damayan Migrant Workers Association that represents Filipino migrant workers, explains: “Many of the legislators are men who belong to the sector of society who are the employers – they will be directly affected by the bill of rights.”

Raoul adds that “a lot of powerful people in decision-making positions of power enjoy the convenience” of employing domestic workers, “often at the expense of somebody else being exploited.” It’s not only a matter of ideology but practicality.

With the passage of the New York Domestic Workers Bill of Rights, though, activists like Oalican and Raoul are hopeful that the tide is turning in the workers’ favour, not only in the United States but globally.

This month, at the International Labour Organisation’s conference in Geneva, a measure was adopted to ensure rights for domestic workers. The convention’s decision provides for freedom of association, fair terms of employment and decent working and living conditions, easy access to dispute settlement procedures, regulation of employment agencies, and protection of migrant domestic workers worldwide.

“Seeing everything happening in the last few weeks,” says Shenker, “it feels like the movement is building power. We’re feeling optimistic.”

Ephese, who has worked with Raoul and the Haitian Women for Haitian Refugees’ campaign for domestic workers rights, is hopeful. Her lips crinkling into a smile, she says that what she dreams of is working for an employer who treats her as a member of the family.

“This bill,” she says, hands fluttering, “will change the working environment and how workers are treated.”

In the meantime, Ephese says, she’s looking for a new job.