MEXICO: In Juarez, Years of Seeking Justice for Murdered Women

CIUDAD JUÁREZ, Mexico, Jun 11 2010 (IPS) - “Sometimes I’m cheerful, but other times I see no reason for working in the community or even for life,” said Paula Flores, who has become the symbol of the fight for justice for the hundreds of women who have been murdered or disappeared in this northern Mexican border city. 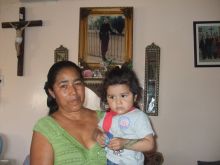 Paula Flores and a grandchild, next to a photo of her murdered daughter Sagrario. Credit: Daniela Pastrana/IPS

“Sometimes I hit bottom,” admitted Flores, 52, speaking to IPS in her home. Her voice was subdued and her sad gaze rested on some point out in the desert that surrounds the Lomas de Poleo neighbourhood. Located in Ciudad Juárez’s western outskirts, it is a long way from city centre — and poverty is more than evident.

Sand covers the unpaved streets, an extension of the desert that for the last two decades has witnessed some of the most gruesome sexual violence — nearly all of which has gone unpunished.

Paula Flores is the focus of a documentary film that was screened at the 3rd International Human Rights Film Festival, May 21-June 3 in Mexico City, 1,840 kilometres south of Ciudad Juárez.

Directed by José Bonilla, “La Carta: Sagrario… nunca has muerto para mí” (The Letter: Sagrario… For Me, You Never Died), centred on the mother’s perspective, follows the 12-year fight for justice of the family of Sagrario González Flores, who was raped, tortured and murdered in 1998.

“Juárez is an issue that is a challenge to all of us,” the director told IPS.

Sagrario disappeared Apr. 16, 1998, two months before her 18th birthday. Her body was found in the desert 14 days later. She was the fourth of seven children of Paula Flores and Jesús González. Her father committed suicide in 2006, unable to overcome his grief.

The family had moved to Ciudad Juárez, in Chihuahua state, in 1995 from a town in the neighbouring state of Durango. They dreamed of improving their lives in a city where the for-export factories, known as “maquilas,” were still booming.

In the 1970s, Mexico had become fertile ground for these subsidised and tax- exempt assembly plants, which are largely unregulated and operate on cheap labour, employing mostly women.

“We had no idea what awaited us here,” Flores said, her voice a whisper.

In February 2005, the family convinced the police to arrest José Luis Hernández, alias El Manuelillo, a well-known figure in the neighbourhood who worked as a “coyote” — a human trafficker who was paid to cross undocumented migrants illegally into the United States.

Hernández had disappeared for seven years, shortly after the crime. It was the family’s own investigation that led to him.

In his initial statement, he said two men had paid him 500 dollars to deliver the young woman, who was intercepted as she left her job at the maquila, shortly after 3:00 pm. That was not the usual time that her shift ended — management had abruptly changed her schedule — which meant her father was not there to accompany her home.

But during the trial, Hernández changed his story, asserting that he acted alone. He is now serving a 28-year sentence in a prison far from Juárez, in the southwestern state of Jalisco.

“The case has not been resolved,” said Sagrario’s mother as she looked through newspaper clippings about the family’s 12-year search for justice.

“They never put together a reconstruction of the events, and when I told off Manuelillo, he said that the cops had told him to make that statement (about acting alone) so they could close the case,” she said.

Since 1993, when the first killings of maquila women were reported, crimes of gender violence have continued unabated, and the numerous human rights and victims organisations working on this problem agree that the death toll has surpassed the thousand mark.

Official reports state that about 800 women have been killed since then. But the authorities do not record them as femicides (“feminicidios” in Spanish) — defined as the systematic killing of women, or killing based on gender hatred, a definition that arose from the Juárez crimes.

Government agencies only recognise that more than eight percent of the women’s deaths can be attributed to “crimes of passion” or “family problems,” and 12 percent have “unidentified causes.”

The current rate of murdered women in Juárez is 23 per 100,000 women, which is three times the rate that the World Health Organisation defines as an epidemic. However, in this already violent city, torn by drug trafficking, it is far below the rate of murdered men: 354 per 100,000.

“That other violence has overtaken the issue (of femicide), but the girls keep disappearing, and that they aren’t found as quickly is another thing,” said Flores.

According to a study by the non-governmental Juárez Citizen Security Observatory, the murder of women has jumped 579 percent since the city got caught up in the wars between the drug trafficking cartels.

Of the 259 women killed in the last two years, 51 were clearly attributable to gender violence.

“Impunity is the key to continued femicide in Juárez,” summarised Patricia Ravelo, who conducted all the research that went into the documentary film.

On Nov. 16, 2009, the Inter-American Court of Human Rights issued a condemnatory sentence against the Mexican state for the murder of three women in Campo Algodonero, outside Ciudad Juárez. It was the first ruling of its kind and established reparations for gender-based killings.

The ruling, which cannot be appealed, holds accountable several officials, charged for supporting impunity in the femicides.

In particular, the families of the victims point to Arturo Chávez, who currently serves as Mexico’s Attorney General, and was the Chihuahua state attorney general when the Campo Algodonero murders occurred.

His designation as national attorney general came under fire from women’s and human rights organisation in Chihuahua. To add insult to injury, they said, the government of conservative President Felipe Calderón, who has not approached the Juárez families, ignored their protests.

“We have come up against the fact that the Mexican state is unwilling to carry out the (Inter-American Court’s) sentence,” said David Peña, attorney with the human rights watchdog Amnesty International.

Paula Flores brought a lawsuit before the Inter-American Commission on Human Rights in 2007. That year she also founded the Sagrario Foundation, which looks for ways to articulate a cultural alternative to violence.

Also, since 2002, the María Sagrario Flores González nursery school has been operating in Lomas de Poleo, providing care for 250 children under age six.

“Some families are tired of the issue, and people have grown accustomed” to the femicides, said Flores. She believes the strategy of the state and national governments is to minimise the phenomenon and discredit the organisations.

“But my daughter is not a myth, as the governor (José Baeza) says, that the dead women of Juárez are a myth. I didn’t make it up. Sagrario did live — she had a great desire to live.”